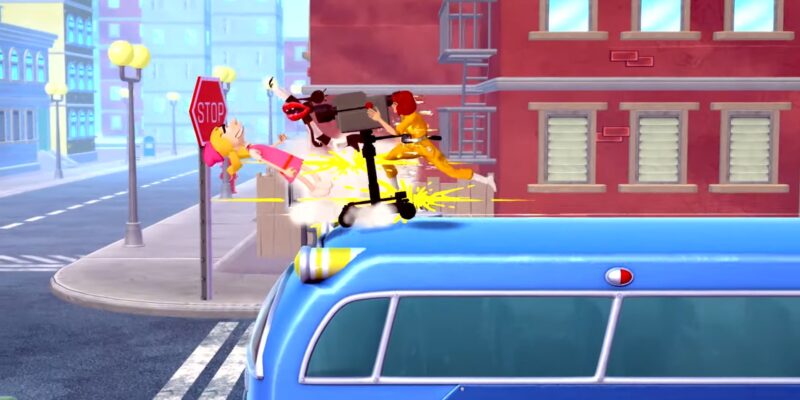 Earlier in the week, April O’Neil was confirmed for Teenage Mutant Ninja Turtles: Shredder’s Revenge. She’s joining the boys in green as a playable brawler, throwing hands with the Foot Clan. But her desire for violence hasn’t been quenched. During gamescom 2021, April O’Neil was revealed as another fighter in Nickelodeon All-Star Brawl, along with a horrible monstrosity known as CatDog.

For those wondering what the hell I’m on about, All-Star Brawl is a Smash Bros.-like fighter starring Nickelodeon characters. The game will include characters throughout Nickelodeon’s past and present. April will square up against the likes of Oblina, Danny Phantom, Lincoln Loud, and Powdered Toast Man of all people…heroes…things. The game features stages influenced by the shows, such as Ren and Stimpy’s kitchen and the reef from SpongeBob SquarePants.

April O’Neil will have some friends when she joins Nickelodeon All-Star Brawl. Both Leonardo and Michelangelo from the Teenage Mutant Ninja Turtles will be there. Their stage is the Turtles’ hideout in the sewer, which is shown off briefly in April’s reveal trailer.

CatDog creeps out the cast of Nickelodeon All-Star Brawl

And then, we have CatDog. Man, as a kid, I never liked that show for some reason. Maybe the jokes didn’t land, or perhaps I was just disturbed by the whole “cat and dog siblings fused at the hip” thing. It was probably both. Regardless, the goofy thing that is CatDog is coming to Nickelodeon All-Star Brawl. In the trailer, we see Cat use his brother’s head as a blunt weapon against foes. In fact, Cat seems mostly useless in the trailer until he whacks someone with a fire hydrant, which makes some sense. I guess?

The possibility of Nickelodeon All-Star Brawl coming to PC has been questioned since its announcement. For a while now, the game has been marketed as a console release for all current and older generation systems. However, the game is absolutely heading to PC, and it already has a Steam page up. Nickelodeon All-Star Brawl will be available this fall.

Starfield shows off three new locations from across the stars