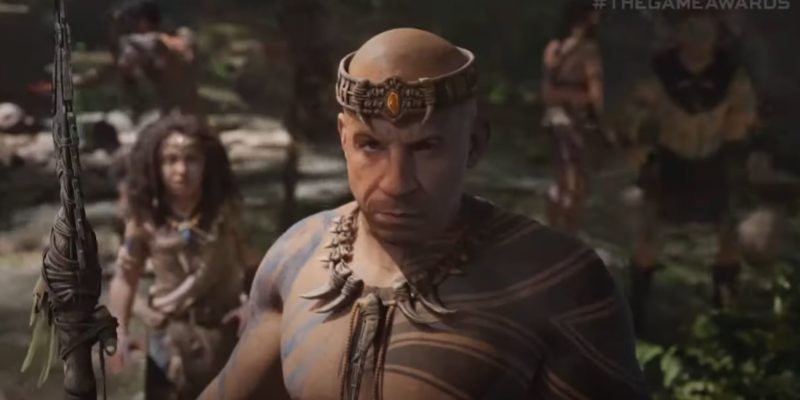 Ark: Survival Evolved is surely one of the biggest games on the market right now. It’s got everything: survival, dinosaurs, crafting… probably? I don’t know, I haven’t played it. What I do know (maybe?) is that Ark II has just been announced with a trailer during The Game Awards. It begins with a child watching a lizard as Vin Diesel and his CGI wife, Mrs. Vin Diesel, walk into frame. They’re part of a tribe that is walking to a place of some sort, when he bids them to hold off. A cave-man-person of some sort approaches and Vin Diesel, being the Vin Diesel of the tribe, confronts him in a battle of Vin Diesel versus ‘Definitely Not Vin Diesel.’

But suddenly, a second dino guy shows up and Vin Diesel has to fight them both at the same time. It’s a knockdown drag-out battle for survival until a T-Rex shows up and eats one of the dino guys. I have no idea what anything in this trailer is meant to represent. It’s very high-quality and expensive-looking, and ends with Vin Diesel and Vin Daughter walking into a cave and finding a hologram with what’s this?! Vin Diesel on it! The hologram says something about the Genesis System and I don’t know what any of this means. Here just, watch the trailer down below.

The Chronicles of Riddick: New Dawn

If you’re an Ark fan, I’m sure you’ll be able to make more sense of this than I. At any rate, I’m sure this ties in with the recently-announced animated film set in the universe, as Ark most certainly isn’t a narrative-based game where you play as famous actors. So, yeah. Ark II is coming out or something. Now if you’ll excuse me, I need to not type the name Vin Diesel for a while. Crap, I did it again!