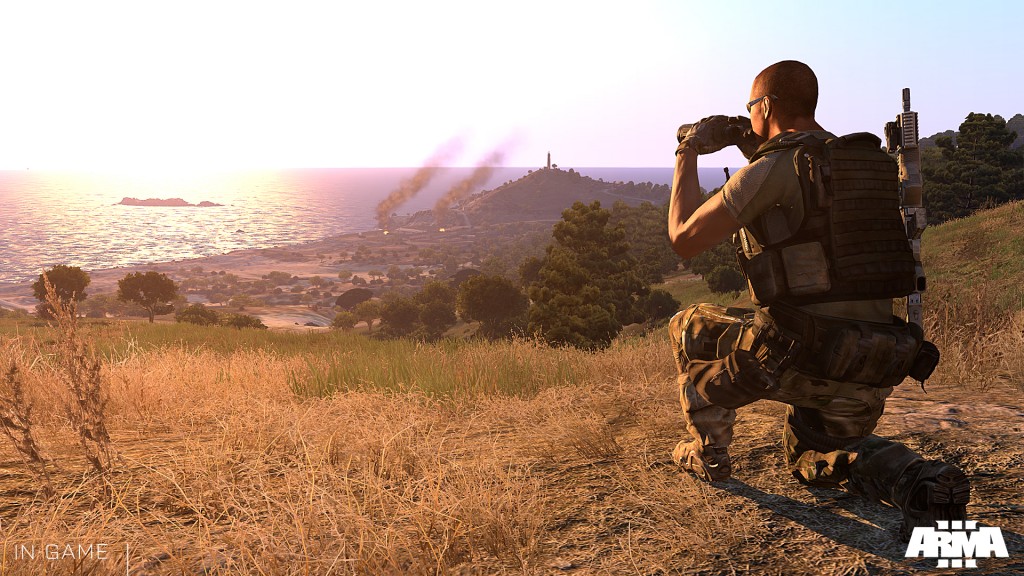 Looking to the future.

Bohemia have outlined their 2014-2015 “roadmap” for Arma 3, and it includes a whole lot of new content. It’s divided up into three sections – Platform Updates, DLC, and Expansions – so we’ll take a look at each in turn.

Platform Updates are free updates that make significant changes. Currently, Bohemia are working on Steam Workshop support for add-ons, a Game Launcher to help you keep track of mods and to add all sorts of other functionality based on what the community wants, and a “Bootcamp” update that will give newbies a smoother introduction to the game via “refined sandbox mechanics.”

DLC is… well, DLC. It’s small batches of paid content. Bohemia are keen to avoid fracturing the multiplayer base, though, so “features are free, content is paid.” The team aims to explain more on how this’ll work in the future, but I’m going to guess that engine additions and new vehicles will basically be made available to everyone, at least in multiplayer.

Anyway, there are two DLC packs planned. The first is Arma 3: Helicopters, which – other than adding transport helos and “a selective implementation” of Take On Helicopters‘ RotorLib Flight Dynamics Model – will add more depth and breadth to helicopter gameplay. Expect the addition of sling loading, which should help helicopters be more important logistically, and the ability to fire from vehicles. Which, naturally, will impact more vehicles than just helicopters. This one’s due for release in the second half of 2014.

The second planned DLC pack is Arma 3: Marksmen, which aims to overhaul the shooting mechanics and make it so that “firing a weapon is simple to do but challenging to master.” They’ve got a number of features planned for this, and the pack will add in a variety of weapons that’ll make the most of the new mechanics – primarily ranged and high-calibre ones, but also ones that will fill unique niches rather than the same weapon with visual differences. As with the Helicopters DLC, this will have pretty a pretty broad impact on the mechanics as a whole. No real date for this, except for “after the Helicopters DLC.”

Finally, there’s a full expansion in the works for late 2015. Not much in the way of details, but: it’ll have a new terrain that’ll offer its own feel and gameplay, “investments in civilian life and diversity”, a more fully-featured 3D scenario editor, and probably loads of other stuff. Unlike Arma 2: Operation Arrowhead, it won’t be stand-alone.

All of this is in conjunction with the ongoing things Bohemia are working on, too, like testing large-scale multiplayer performance and co-operating with the DayZ team.

For a few more details, you can read the full post about Arma 3‘s future on the Bohemia blog. Otherwise, expect more info on each of these additions as we get it.