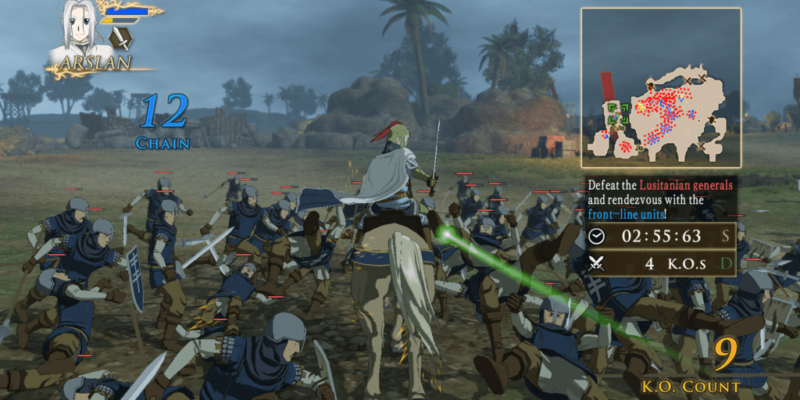 Just in case that image above isn’t enough of a clue, yes, Arslan: The Warriors of Legend is another Tecmo Koei Warriors release. This particular release is a tie-in to a recent animated series, which is based on a 1980s novel series by Yoshiki Tanaka, which in turn is based on a much older Persian tale called Amir Arslan. Our titular hero is the young crown prince of a kingdom called Pars, a nation under threat from the neighbouring (and ultra-fanatical) Lusitania.

PC owners will probably be aware that Koei don’t exactly have the greatest porting record on this platform (“absolutely no frills” could perhaps be their PC philosophy), so let’s have a look at what Arslan has to offer in terms of options, performance, and control sensibilities. 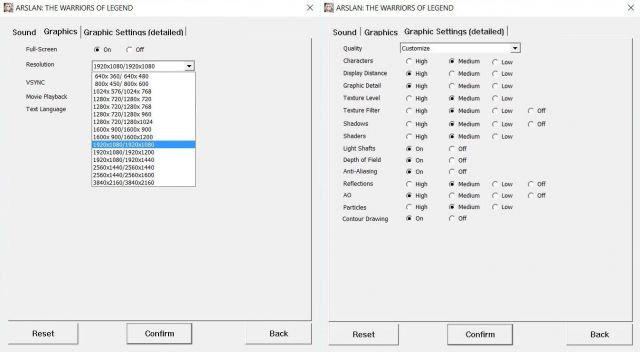 Yep, it has a launcher. A lot of this stuff appears in the in-game menus as well, but I’ve combined the two most relevant tabs into one image above.

You may just about be able to see from the drop-down menu I’ve highlighted that, good heavens, those resolution options go up to 4K. Aspect ratios like 16:10 and 4:3 have a few options listed, but as a secondary after the 16:9 one, ie: 1920×1080/1920×1200. So it sounds like selecting those may result in either a stretched image or black bars. There’s also a curious lack of resolutions beginning with 1440.

Over in the graphics tab, there are quite a few options which don’t appear in-game. Once you’ve loaded up Arslan: The Warriors of Legend, it’s really only the upper section (characters, textures, display distance etc) that can be changed. [Edit 10 Feb]: As noted in the comments, you can actually switch to another screen with more of the launcher options on it. I totally missed that when first compiling this piece, apologies!

In fact let’s have a look at that screen now. 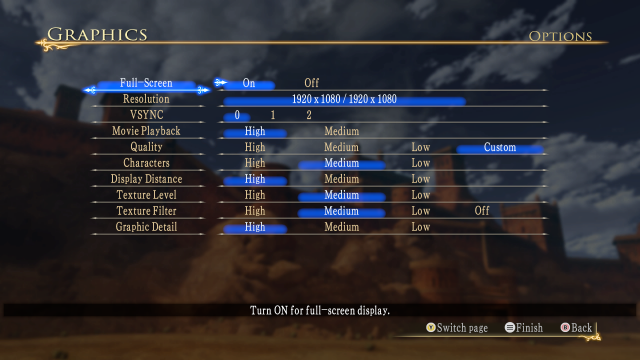 Those vsync options have the same slightly mysterious labelling in the launcher as well. 0 equates to no vsync, 1 caps the framerate to 60, and 2 keeps it at 30. I think. Retaining 60fps doesn’t seem all that easy in this game, as we shall discover.

But first, a bit of positive news. For once, it seems like the PC version of a Warriors game really does have options that allow it to exceed the quality of the PS4 version. This is actually kind of a big deal for Tecmo Koei ports, because normally we end up with weird mixtures of PS3/PS4 textures. This time, Arslan: The Warriors of Legend can (with the right settings) look best on the PC.

That’s also confirmed by Koei themselves.

Arslan: The Warriors of Legend – PC Steam version is all equivalent to PS4 ver. (slightly better than PS4 at the highest setting). #KTfamily

Here’s an image comparison between lowest and highest settings. Differences in things like draw distance and ambient occlusion should be fairly clear. There are also a few smaller details added at higher levels, like the line shading on Arslan’s cloak.

Performance at all preset levels is … pretty odd. I’m running Arslan: The Warriors of Legend on a machine with the following inside i5-6600 / 16GB RAM / 4GB R9 380X, and using the 16.1 Crimson drivers. This is a nicer looking Warriors game than usual in some respects (the atmospheric lighting seems superior to prior titles), but it shouldn’t really be troubling a PC that’ll happily run things like Just Cause 3 and Grand Theft Auto V at 60fps with a couple of settings lowered.

Even on the lowest possible settings, Arslan won’t hold 60fps. Strangely, there isn’t exactly a huge gap between lowest and highest settings either. I ran through one of the earliest battle scenarios (lots of soldiers and various effects to render) at low and high, and found that the former would fluctuate between around 45-60, while the latter would be closer to 35-50. At times the game can drop as low as the 20s when initiating a ‘Mardan Rush’, an attack involving a whole unit of cavalry or infantry. I even tried running the game at 640×360 for a laugh, and that wouldn’t hold 60fps either (it was more like an average of 57). Something is definitely amiss.

I’m tempted to point the finger of suspicion at AMD’s Crimson drivers, which currently have an issue with aggressive power-saving (resulting in the card downclocking and lowering performance). However I can usually solve that problem by turning off v-sync, and doing so with Arslan doesn’t really change anything.

Out of interest I downloaded the PS4 demo, which it turns out runs at 30fps. So, either the PC version has only been optimised up to the same standard (but all bets are off beyond 30fps), or I am running into some funky AMD Crimson driver strangeness. This is just a sample size of one PC, so it would also be a good idea to wait for additional performance reports before assuming this behaviour is universal. 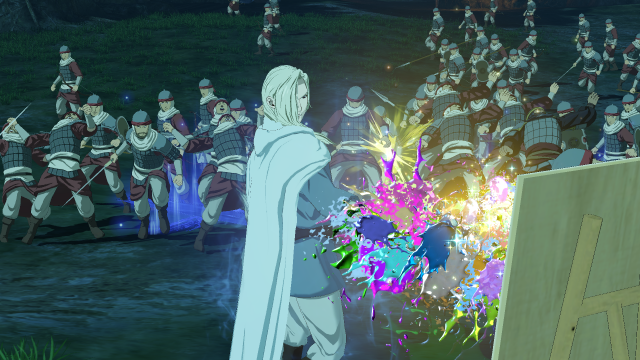 The port could be better, but the special attacks are as ridiculously great as ever.

Anybody hoping for mouse support in Arslan will also be in for disappointment. I’m not exactly sure what the logic behind adding keyboard support but ignoring the mouse might be, but it seems to keep happening with Warriors ports. Without mouse-based camera controls, the ability to rebind those keyboard controls is a somewhat hollow victory. Nobody wants to use their keyboard to move the camera in this type of game, surely?

There’s also no FOV or UI scaling, so you’re stuck with the fairly narrow Warriors standard and the traditional ‘mini’ map actually taking up quite a lot of room.

Finally, Arslan is subtitled in English with full Japanese voice acting (the animated series team reprising their roles, as far as I can tell). The anime version does have a pretty good English dub, but the game only offers Japanese as an option. Possibly for licensing reasons, possibly for financial ones. 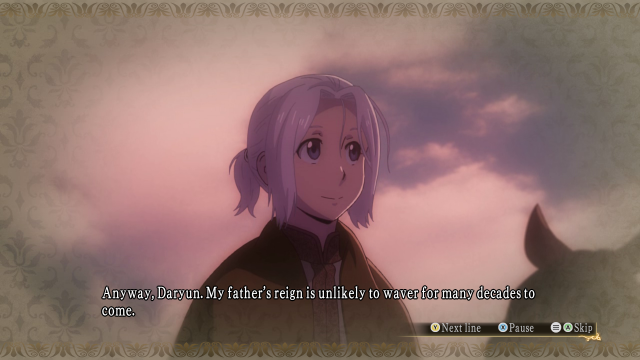 Yep, that’s definitely going to be the case. Ab-so-lutely.

Overall then, Arslan: The Warriors of Legend is broadly what you’ll have come to expect from a Koei PC port. To their credit, this version has a reasonable selection of graphics options to play around with, and for once is based on (and slightly improves over) the PS4 release rather than some strange PS3 amalgam. Resolution options appear to be more expansive than usual too, though players are forced to choose from a pre-selected list rather than having complete control over how the game is rendered.

But these improvements seem to have come at some performance cost. Unless Arslan simply dislikes AMD GPUs (which, again, is a possibility here), getting a solid 60fps out of this title proves to be an arduous task, even on hardware which should be up to it. Mouse and keyboard users are, once again, left rather out in the cold.

Those who are interested in Arslan: The Warriors of Legend, either because (like myself) they have an endless and unexplained fascination with the Warriors series, or they’re fans of the new animated series, may not be put off by those drawbacks. But PC users in general almost certainly will. Koei’s port quality seems to go back and forth in increments, and it needs to become more consistent if the company is ever going to appeal beyond those who are prepared to put up with persistent oversights for the sake of owning a particular game.

Arslan: The Warriors of Legend Review