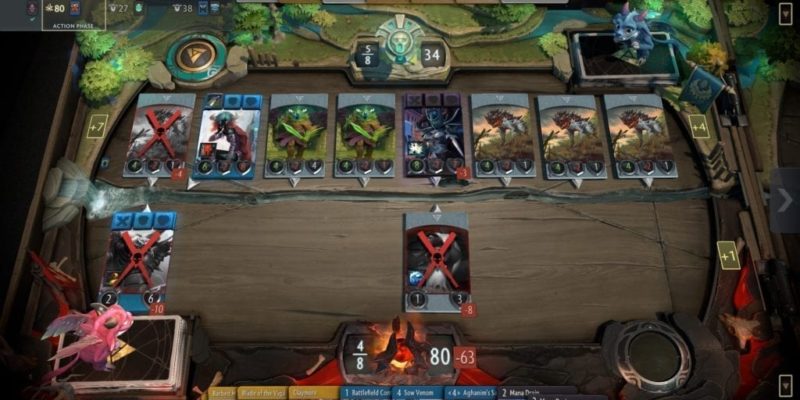 Artifact has lost around 80% of its player base since it launched on November 28. The news, however, isn’t all that surprising. Despite Valve’s history of releasing games to critical success, Artifact has stood out as the clear deviant. According to SteamDB, only 20% of its initial player base is still playing the game.

It’s been a rough, slow start for Valve’s Dota 2 card game. After launch, it peaked at a little more than 60,000 concurrent players, way lower than expected. Its inherent pay-to-win nature produced thousands of negative reviews on Steam, as early adopters soon realized how difficult it was to progress without breaking open their wallets. Even though the game grants booster cards and event tickets, it wasn’t enough to stay competitive, and players were dismayed as they began to realize that success wasn’t going to be cheap. This, of course, was on top of the fact that Artifact isn’t free to play. And despite this, it’s still rife with seemingly inescapable microtransactions.

Players were not happy about those extra fees.

Artifact‘s pay-to-win design and negative press have taken their toll. As of yesterday, the game now has around 12,000 people still playing according to SteamCharts. Artifact has dropped from fourth place on Steam to 32nd. That’s an 80% drop in players, which is substantial for any game — let alone a Valve-developed one based on Dota 2, one of the most popular franchises on the planet.

I’m curious to see how this latest news will affect Artifact in the future. It’s highly doubtful the game will ever stray from monetization, as it is the lifeblood of most digital card games. I’m sure Valve is already trying to figure out the changes the company can make before it reaches the point of no return. But, with these numbers, I wonder if it’s too late.

If you still want to give Artifact a try, be sure to check out our prior coverage. Our own Tim McDonald has composed a handy little how-to guide to gradually ease you into the game. He also speculated whether you can play Artifact without microtransactions. Unnecessary spoiler: yes, but you can’t get very far.

By Joshua Chu37 mins ago
News