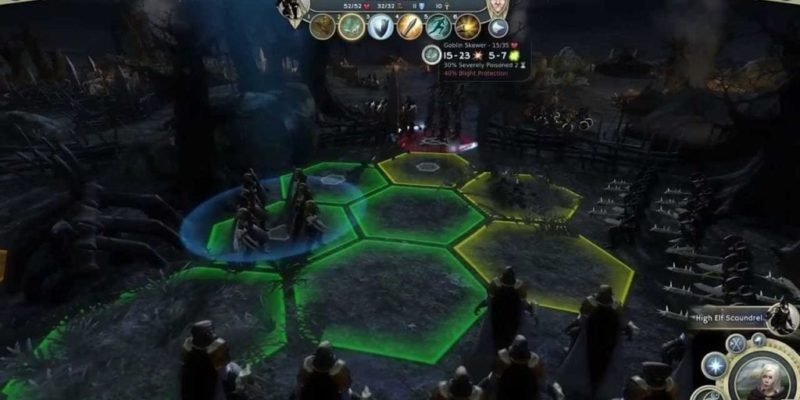 The Age of Wonders series has always had layers of depth to its tactics, both on the world map and in battle. With the new class mechanic coming there is more incentive for players to come out of their wizard towers and defeat your opponents more directly. The new Rogue class however takes a more stealthy approach by utilising poisons, agile units and mind-controlling spells to dictate their engagements in battle more easily than other classes we know about so far.

Checking out the trailer above, I don’t know about you but my dreams of sexy nymphs from Age of Wonders 2 were crushed when I saw those big-pixeled Dwarven Succubi, I had a horrid nightmare just now thinking about them…flying over my wall, their beards wagging and wings flapping (shudders).

Spells like Nightwish can hide your cities, Plague of Brigands can cause a revolt in your enemies city to drain their armies numbers and best of all (correct me if I’m wrong), Mass Confusion spell from AoW2 seems to have made a transition to Mass Panic, causing enemies to randomly flee than attack each other, maybe it’s been nerfed considering the lack of willpower attribute details around and Dreadnaughts Destabilize Mana Core spell?

Compared to AoW2, Age of Wonders 3 lets you combine race, class, alignment and your magical sphere you specialise in to yield a unique mix of spells and units, mostly determined by your chosen class. With focus into one of these aspects, your chosen class could probably obtain those big top-tier spells like Mass Panic.

* Scoundrel – The dirt fighting henchmen of the Rogue with the ability to climb fortifications.
* Succubus – Corrupted seductress built at cities from one of the main races. (Yes – we also have Dwarven Succubi with beards). Can convert units on the battlefield.
* Shadow Stalker – Incorporeal monster of elemental darkness. Has protection against physical weapons.

Note the Zephyr spell. I reckon that Age of Deception and Incite revolt could synergise nicely.

One spell of note in the screenshot above, is the Summon Zephyr Bird spell, in Age of Wonders 2, this was a great scouting and forlorn hope unit, now it seems to have a higher tier to be cast, so specialising into the magical sphere it’s under, could yield a higher chance for the spell to appear for researching. Even if temporary, by revealing units and taking away your opponents resources you always gained a higher advantage in Age of Wonders, now with the newer spells that state of play could shift more easily for all players involved.

If Triumph are still aiming for a release in late March, more info on the magical spheres would be nice. Regardless, Age of Wonders 3 is certainly one tactical RPG to watch if you got stung from Might and Magic Heroes 6 like I did.

Check out further screenshots below and more infomation over on Age of Wonders III’s Rogue class page.

Shadow of Mordor video goes in-depth with the nemesis system

Cyan Inc.’s Myst will soon be reimagined in virtual reality