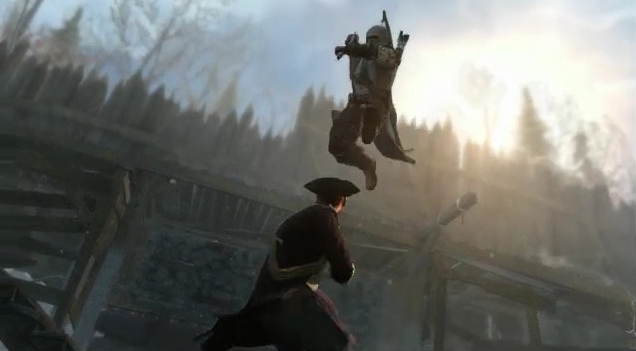 Ubisoft has demonstrated an extended section of Assassin’s Creed 3 at its E3 2012 press event, featuring a whole host of activities. The footage opened with our new protagonist, Connor, stalking and then killing a stag. He’s then attacked by angry looking wolves and has to fend them off with a rudimentary pistol.

After delivering the stag meat to a nearby encampment of hungry soldiers (suggesting that hunting is something of a side-mission), he’s given a target to assassinate at a British fort. Clambering up the cliff face to reach the walls of the fort, Connor then pursues the British military officer through the camp and ends his life in brutal fashion with the bayonet of a musket, nabbed from a hapless redcoat at an earlier point.

Ubisoft also confirmed that events in the game would take place before, during and after the American Revolutionary war; not just during the fighting itself. It was reiterated that the enemy, as always, would be the Templars (so don’t expect the British to be the only menace you face).

Watch the gameplay footage below.

By Greg Bargas32 mins ago
News