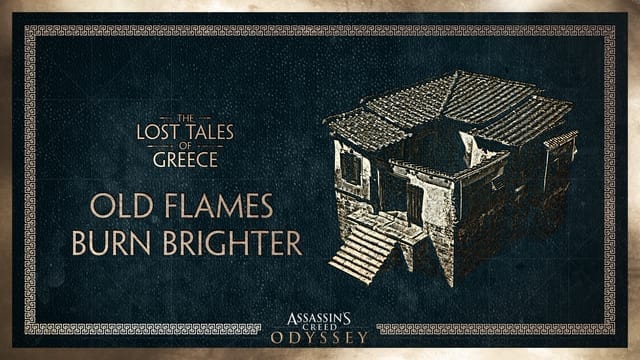 All odysseys must end, but Assassin’s Creed Odyssey is still going strong almost a year on. In fact, Ubisoft has announced a bundle of new content and features coming in August, so if you still want more of Odyssey, say no more. First of all, you can expect the release of an all-new The Lost Tales of Greece free episodic story quest today. This new quest is called “Old Flames Burn Brighter.” All you have to do is reach Chapter 5 in the main storyline of Odyssey, then the quest will show up on the map. As with previous The Lost Tales of Greece quests, it will bring new and familiar characters and self-contained adventures to your Odyssey.

The update also includes new items, namely the Ikaros Pack, which contains a gear set, a new mount, and a new bow. Unlike “Old Flames Burn Brighter,” this new pack will only be available on August 27 on the store, as well as at the Oikos of the Olympians. Later in August, Ubisoft will drop the Title Update 1.5.0, which will address some in-game obstacles and prepare the game for the upcoming release of Discovery Tour: Ancient Greece, so players can explore the Ancient Greek world of Odyssey without combat and other gameplay constraints.

The Story Creator Mode launched in beta back on June 10 during the Ubisoft conference at E3 2019. It promised to add even more content to a game that’s already bursting with it in its base experience. It’s still a new mode that allows players to create their own stories and share them with other members of the Assassin’s Creed Odyssey fan community. Based on the E3 2019 trailer, it looks like a very robust mod tool. Since the launch in beta, Ubisoft has added new features such as Elite NPCs, new NPC behaviors, and objective grouping. There are also several quality-of-life improvements.

With the August update, Ubisoft will also add an “Inventory Starter / Objective” feature. This will allow players to start a new quest using quest items. A community-favorite request since the introduction of Story Creator has been patrol behavior, which Ubisoft now says is coming soon. Finally, the Story Creator Mode Website will also include some UI improvements, such as allowing players to save stories for later, create and share playlists, and also queue stories.

What do you think of the August update? Are you still playing through Assassin’s Creed Odyssey? Have you tried any community-created stories and quests? Drop your comments below and tell us your experience!