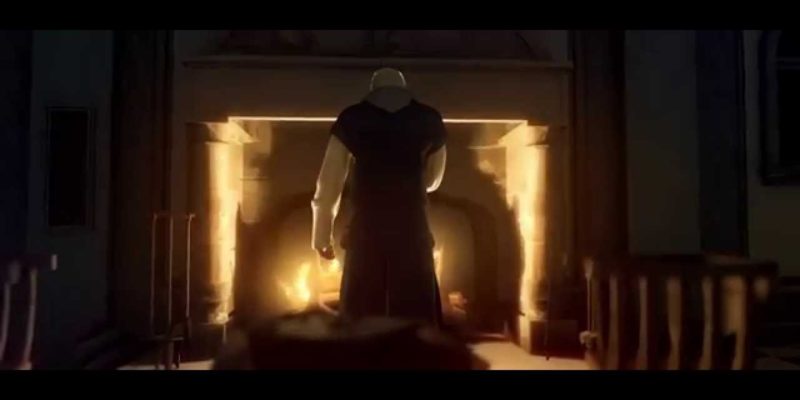 Despite all the hiding inside crowds and skulking about, Assassin’s Creed has only ever been tangentially about stealth. Whistling at people from inside a bush and then stabbing them is more horticulturally-assisted murder than unseen agent. Pure stealth games allow players to pass by completely unseen, and in Assassin’s Creed there’s almost always a trail of bodies.

Assassin’s Creed Chronicles: China (part one of a 2.5D series that’ll ultimately form a trilogy) is about the closest the series has come to a full stealth title. The somewhat unlikely impetus for this is the animated Embers short, in which protagonist Shao Jun visits an aging Ezio in Italy and receives some scholarly advice along with a magical MacGuffin box. 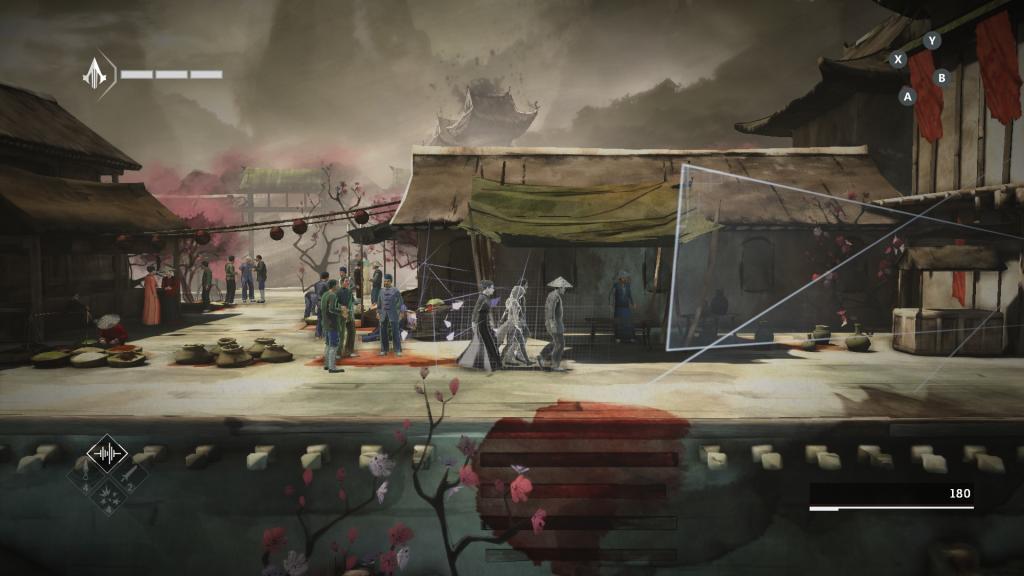 It just wouldn’t be an Assassin’s Creed game without blending into crowds.

You don’t really need to know that to follow Assassin’s Creed Chronicles: China’s silk-thin plot, which can be pretty tightly summarised as “Shao Jun attempts to re-establish the Chinese Brotherhood by stabbing a bunch of Templars know as The Tigers, with mixed results.” In fact if you recently watched Embers, you may spend more time distracted by Jun’s brand new posh British accent.

After everybody important in Unity turned out to be British, and Shay’s alarming ‘Irish’ tones in Rogue, I’m half expecting the cast of Assassin’s Creed: Victory (location: London) to be sporting a Glaswegian brogue for no particular reason.

Anyway, the point is that Assassin’s Creed Chronicles: China isn’t really attempting any deep characterisation in its simple revenge plot, and nor does it ever pretend this is the case. But what it lacks in storytelling, Chronicles: China makes up with some gorgeous, faux-painted backdrops inspired by Ming Dynasty watercolours.

Surprisingly, given its visual appearance and publisher, this title doesn’t use the UbiArt engine framework. It’s  actually just Unreal doing a convincing impression. 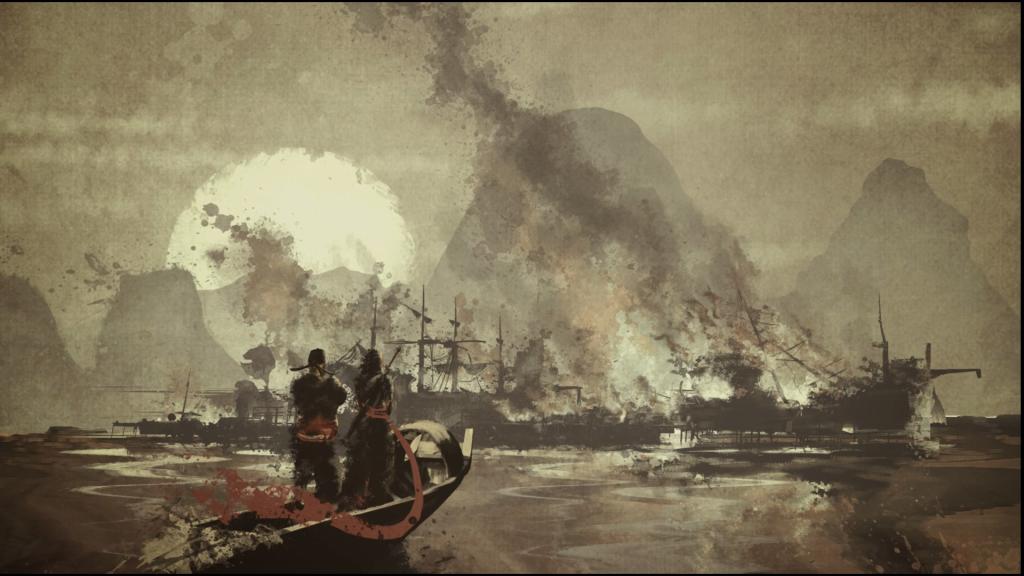 The cut-scenes have some fine moments of composition too.

Development studio Climax had pitched the idea of a 2.5D Prince of Persia game in 2013, but that project ended up being cancelled. Though it’s impossible to be sure, it seems as if a fair amount of that title wound up in this one.

The handful of timed ‘escape the spreading fire’ type levels which provide breaks in Assassin’s Creed Chronicles: China’s stealth focus offer the clearest evidence for this theory. These sequences put an emphasis on figuring out (fairly straightforward) platforming sections under time pressure, and encourage combat-on-the-run rather than methodical stealth. It may be no coincidence that this Prince of Persia-like structure tends to feel more natural and rewarding than the sneaking portions. In part, admittedly, because it features the audacious ability to slide underneath guards, stab them in the balls, and keep on running.

Shao Jun moves and animates with a weight normally associated with the old, rotoscoped side-scrolling games (like, funnily enough, the original Prince of Persia.) This works fine in a parkour-n-perforation game, but brings problems when applied to stealth situations. Jun looks suitably fluid in her movements when doing her canned animations, but having to compensate for those input delays when you’re trying to dodge enemy vision cones is an unnecessary annoyance.

The control system also seems very finicky about picking up bodies. Unless you’re in just the right spot and pressing no other inputs, Jun will just aimlessly stand around. Amazing fun when, as is often the case, you’re under time pressure to hide evidence of your murder spree. 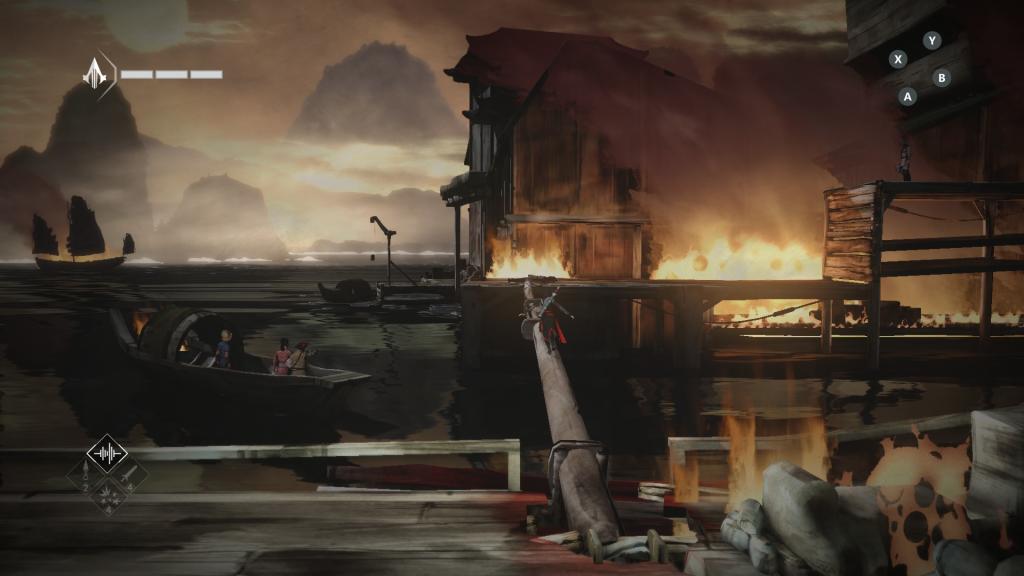 You can periodically run “into” or “out” of the level’s layers, which helps if you need to escape some fire.

Though Assassin’s Creed Chronicles: China’s movement mechanics sometimes need to be wrestled with, it does have a legitimate stealth design philosophy. The greatest rewards are doled out for passing guard patrols as a ‘Shadow,’ and killing no-one (outside of designated targets and the timed escape levels.) If you do feel it necessary to murder a few guards, the game will dock points for being caught in the act or if the body is found.

Each segment of a level is bookended by checkpoints, and gives Shao Jun a style grade (somewhat like Splinter Cell: Blacklist) which corresponds to a points total. The maximum for each level is based on Shadowing, unseen past every guard, and doing the level’s secondary task. Accumulate enough points for a given level, and you’ll unlock a reward. These tend to be health boosts, or extra Mark of the Ninja-esque gear like noise darts. It’s a simple, neat incentive loop for players to keep their play stealthy.

But it does also have a habit of introducing concepts which don’t ever really show up again. At one point you gain the ability to lock-pick your way into hidey-places more rapidly (a concept only introduced in that very same level,) only to find that mechanic vanishes from the game after a short escape-sequence. Caged dogs and birds are introduced, then show up again about twice more when the level designers remember they exist (the latter are largely replaced in function by wind chimes instead.)

Some of the ‘unlocks’ feel gated to points that are rather late in the game, too. One of them, around half-way through, allows Shao Jun to move faster while crouched. That’s a pretty basic stealth technique to withhold for a significant chunk of time. 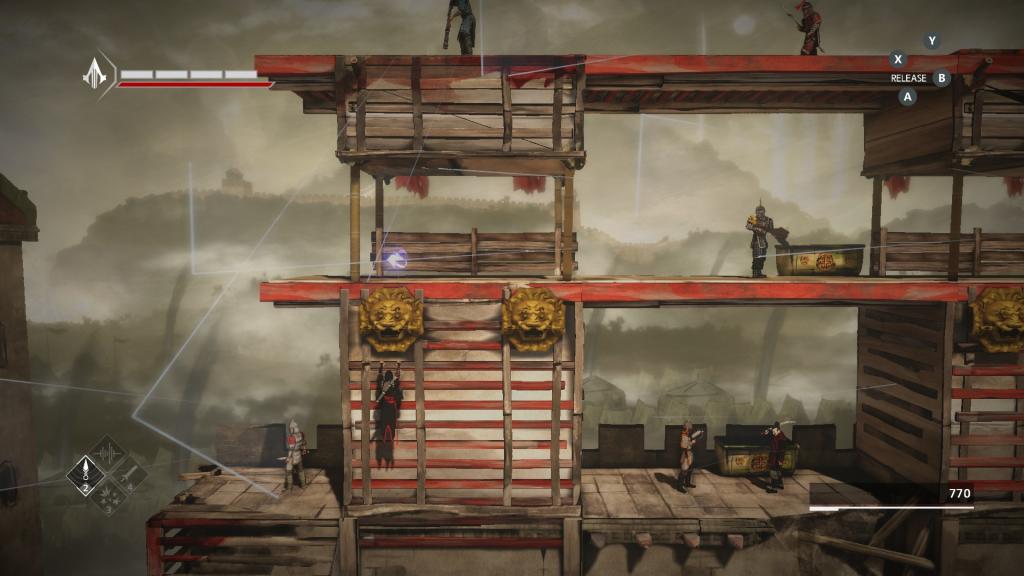 This is the sort of situation where stabbing a couple of guys starts to seem attractive.

In fairness, some of these things are geared towards a New Game Plus play-through. This enables you to run through Chronicles: China’s eleven missions again from the start, but with all your skills and gear intact. There’s also a special ‘Hard’ mode unlocked at the same time, reducing Shao Jun’s health and making guards more dangerous.

These, though, are only relevant if you feel the desire for another run; and the general encounter design in Assassin’s Creed Chronicles: China may well encourage you to stop after the first completion. Whether intentionally or not, the game is structured as a sort of puzzle-stealth hybrid. The majority of situations Shao Jun finds herself can be resolved by figuring out the right moment to dart between hiding areas through a storm of massive vision-cones, and, occasionally, when to apply a distraction to force a wider window of opportunity.

There’s some satisfaction to figuring out these paths, but the game never generates the kind of dynamic tension inherent to stealth classics like Thief: The Dark Project. In Chronicles: China, players very rarely have a chance to salvage a bungled plan (one of the great joys of stealth games,) because the 2.5D playing area and saturation of guards restricts any chance of escape. Even if you do manage to fight your way out with the basic combat system, you’ll almost certainly want to reload the last checkpoint in order to complete the section ‘properly’ and receive more points.

The feeling of dodging an enemy patrol never really peaks above quiet satisfaction, because for the most part (there are moments where you have more options) you’re just trying to follow the path the game has laid out. Any use of gadgets also tends to be pretty telegraphed; literally so in some cases, where Shao Jun will say things like “Hmm, a distraction would be handy here!” 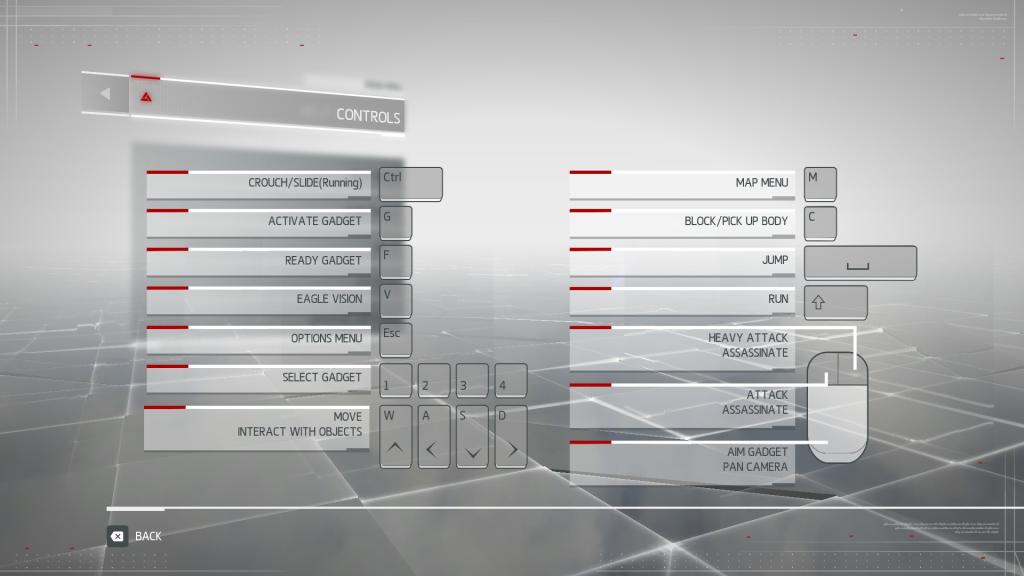 Hope you like this control layout, because it’s not changing.

PC players who fancy playing on keyboard should take a quick look at the image above and see if that configuration suits them, because there’s no way of changing it. The graphics settings are also a bit of a barren wasteland (Vsync, fullscreen, resolution, that’s your lot,) though this isn’t as bad as it sounds because there’s not a whole lot in this game that could really be scalable.

Those who bought Assassin’s Creed: Unity wound up with Assassin’s Creed Chronicles: China for free as part of the apology-DLC plea bargain; and under those circumstances it’s certainly a game worth playing through. The problem for those considering paying for it is that Mark of the Ninja will always be the more attractive 2.5D stealth option in this price range.

Chronicles: China is a competent, if not especially spectacular, stealth-puzzle jaunt through seven hours or so of lovely, Ming Dynasty watercolour backdrops. Credit to Ubisoft for giving the nod to something a little different with the Assassin’s Creed license, but the next two in the series will hopefully prove to be more compelling in design, and tighter to control.

Modder Lays Out The Case Against Steam Paid Mods