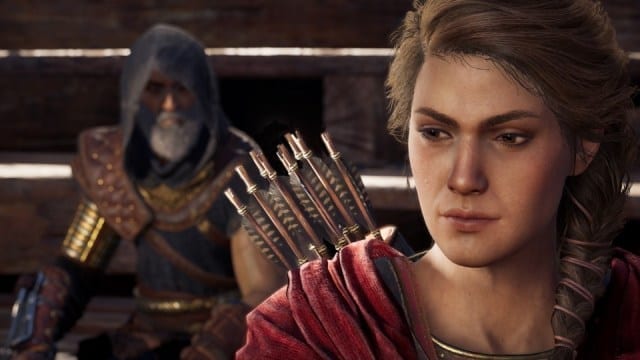 Although Assassin’s Creed: Odyssey was praised for its fantastic open world, rich gameplay, and a story that’s shaped by player choices, the game has hit a sudden low point for fans with its Legacy of the First Blade DLC. The second chapter’s ending sparks controversy by removing player choice and effectively negating the sense of role-playing.

The Legacy of the First Blade story introduces Darius, the first person to use the hidden blade, and his child — whose gender is determined by whichever character players chose in the main Odyssey campaign. The child is a female named Neema if players chose Alexios and a male named Natakas if they played as Kassandra. This sets the story up for an eventual romance, where Alexios or Kassandra will have a baby.

Characters will have a baby regardless of prior decisions, including whether to engage in a romantic relationship with Darius’s child or not. All endings involve giving up the mercenary life to become happy spouses and parents. This has a particular impact on players who decided to play as gay characters or didn’t want any romantic attachments at all. It also flies in the face of a key component of the game. After all, all previous romances are casual, completely optional, and do not take gender into consideration.

The Value Of Choice

In October, creative director Jonathan Dumont told Entertainment Weekly, “Since the story is choice-driven, we never force players in romantic situations they might not be comfortable with. Players decide if they want to engage with characters romantically.”

A related achievement called “Growing Up” only serves to compound the issue. It appears once the player completes a short quest and the baby is revealed. This indicates a view that the character must settle down and have a family before they are considered an adult.

Although Ubisoft has not yet issued a formal statement, the company did apologize for the surprise twist while speaking to Eurogamer.

According to Ubisoft, “We strive to give players choice whenever possible in Odyssey and apologise to those surprised by the events in this episode. Without spoiling it, you will engage in an important relationship as part of a set story. The motivation behind this relationship is yours to explore in game and will be reflected in your character’s story arc. There is one episode left in Legacy of the First Blade which will tie your character’s actions together.”

A second statement to Eurogamer suggests that, in keeping with the inclusive nature of the game, players will eventually be able to choose their motivations for this narrative twist depending on their sexual preferences.

The statement concluded with: “Assassin’s Creed Odyssey was developed by people of all sexual orientations, backgrounds, genders and beliefs, and we have tried to reflect that within the game.”

This isn’t the first time forced romantic gestures rubbed fans the wrong way by negating parts of the overall narrative. For example, many think poorly of the ending to 2008’s Prince of Persia, as it undermines everything that the player worked to accomplish.

We’ll see if history repeats itself when the third and final episode, Bloodlines, releases in March.