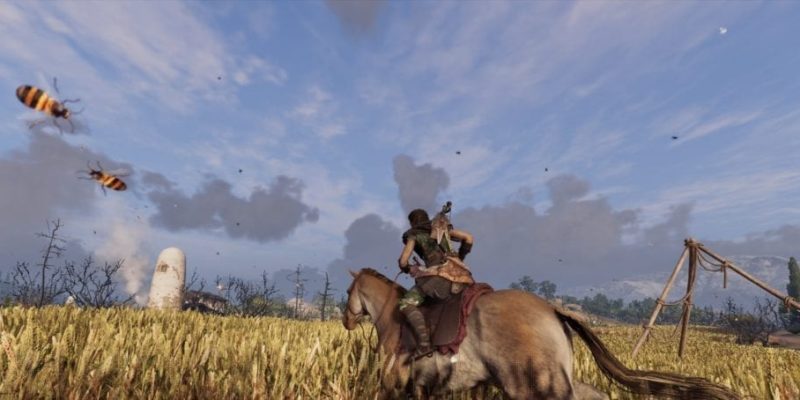 If you checked out our previous History Nerd feature, you’ll not only know of my love for Europa Universalis, but also of yours truly being from a beautiful corner of the world in Southeast Asia. I’m from the Philippines, and history has always fascinated me. One particular subject that’s piqued my imagination has been Greece. Tales from the Ancient and Classical Eras — both historical fact and mythological embellishment — have resonated with me for years. That’s one of the reasons why I fell in love with Assassin’s Creed Odyssey.

Please note that the article will contain minor spoilers about certain boss fights and characters. 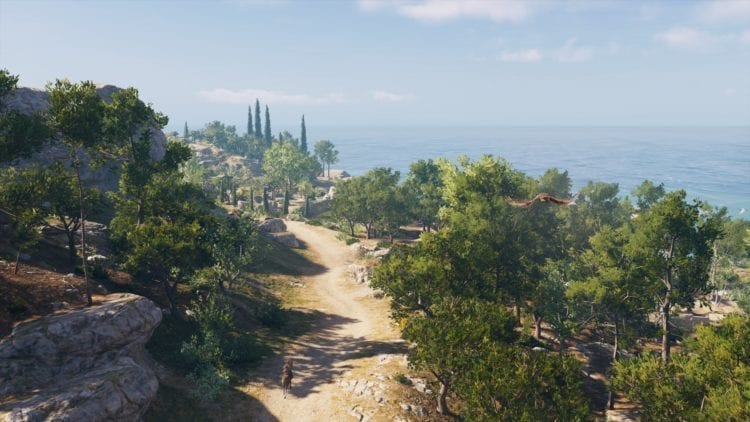 When I was in my elementary years, our teachers prescribed homework for additional learning. The books they had us read were either local tales like Ibong Adarna or Biag ni Lam-ang. That’s for Filipino and Social Studies classes. But once we had our English classes, we had The Iliad, The Odyssey, and The Aeneid. Fun fact, our school sections were even named after the Greek pantheon. We had sections like “VI-Aphrodite” or “VI-Poseidon.” I was in “VI-Apollo,” by the way. In hindsight, it was a bit strange given that the institution was a Catholic school and our respective classrooms were named after the gods of Pagan times.

Fast forward to my final days in college during one particular field trip. We were about to enter a soft drink manufacturing plant. The hallway was narrow, the lights were dim. Given that 300 just came out and was the talk among our entire batch, I could not resist shouting: “Spartans! This is where we fight! This is where they die! Awooh!” My classmates all roared with laughter and soldierly shouts to join in on the fun. I got suspended afterward but it was worth it.

Even years before that, when I was around five or six years old, the first encyclopedias that my parents bought had either dinosaurs or mythology. I envisioned myself becoming an archaeologist or a historian one day. Needless to say, neither dream came to fruition. However, that fascination for the legends and epics of Greece remained. 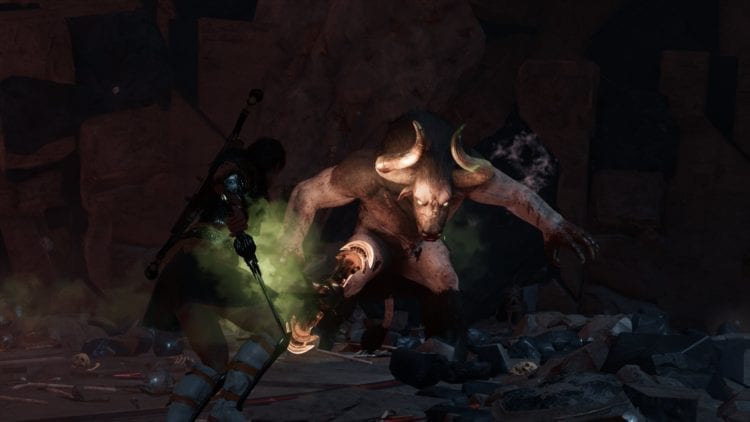 So yes, in many ways, shapes, and forms, Ancient and Classical Era Greece has been a strange part of my life. My love of history intertwined with a rich culture half a world away. There were heroic tales of Theseus slaying the Minotaur (which you also end up doing), or my fellow Jason journeying with the Argonauts. There were feats of strength displayed by Hercules and moments of prowess shown by Achilles (yes, Troy movie and Brad Pitt, I forgive thee).

I read of how Zeus laid Titans low to usher in the new pantheon on Mount Olympus, and how the gods meddled in the affairs of mortals. I heard of how each god or goddess had their own power over some facet of life or nature and how people bowed to their wills. These stories enriched my childhood and filled me with wonderment.

Perhaps that’s one of the reasons why I could not fully embrace another franchise — God of War — simply because you’re out there as Kratos slaying legendary figures and even gods. Assassin’s Creed Odyssey, in spite of being an action/adventure/RPG hybrid, differentiates itself because of one word: respect. It shows respect to the source material, to Greek culture, and to the stories told thousands of years ago while weaving its own fictional narrative. 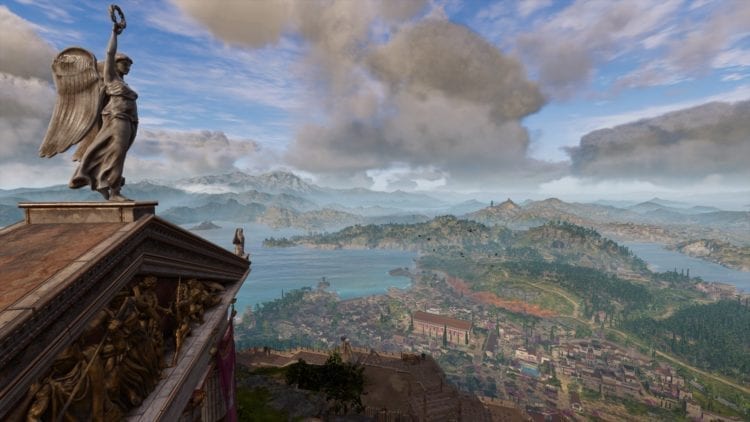 What a tale Assassin’s Creed Odyssey weaves! Set during the Peloponnesian Wars, you’re tasked to find out more about your family and uncover the Cult of Kosmos members that have embedded themselves in Greek society. All the while, you see the effects of a soon-to-be decades-long war that spans the length and breadth of the countryside. Forts are heavily guarded, and certain parts of each region are either ransacked or have corpses littering the streets.

Then there are locations which take your breath away. You reach Athens and marvel at the architecture and design of the Pantheon and the Statue of Athena. Visiting Corinth, Argos, Sparta, and more will also fill you with a sense of awe.

I actually had shivers when I first arrived at the Temple of Apollo in Delphi where the Oracle resided. You encounter several nameless NPCs asking for prophecies and blessings, all while looking at the iconic building in front of you. This is something I had only read about in books. However, the visuals, the design, and the presentation combine to form a vivid imagery and landscape. It made me feel as if I was there at that moment in time in history.

There were even certain parts of the game when I would just tell Phobos to stop galloping around. There’s no enemy to fight or treasure to find. I was just crossing a random cornfield, with birds and bees fluttering about. I just thought to myself: “This… this is beautiful.” Very few games can do that, and Assassin’s Creed Odyssey is one of those. 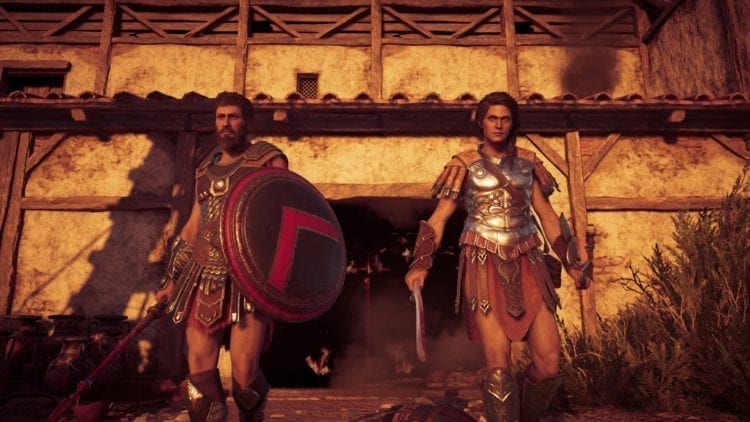 No matter how gorgeous a game’s locales are, it would be useless if the world feels empty and devoid of life. So it’s fortunate that Assassin’s Creed Odyssey has a living, breathing game world. Various towns and cities will have Greeks praying and beseeching the gods in their native language. Even major roads will have entire households traveling, sometimes with their pet dog or mule. If you manage to anger the civilians, you’re not only looking at villagers swinging at you with a sword or a shovel that they just picked up. Even their dogs or chickens will attack you!

The characters themselves further punctuate an engrossing narrative. The prologue itself puts you in the role of Leonidas during the Battle of Thermopylae. Following that, you meet various notable personages in Greek history, including Socrates, Brasidas, Demosthenes, Cleon, Hippocrates, Aspasia, and, of course, Pericles.

Certain conclusions and even plot twists, without going too much into spoiler territory, are also very poignant. For instance, someone murders a historical character during a plague. If you check the actual historical records, that person actually died during the outbreak. Another character who’s revealed to be a member of the Cult of Kosmos, and thus has to die, actually perished during the war as well. Everything just fits. 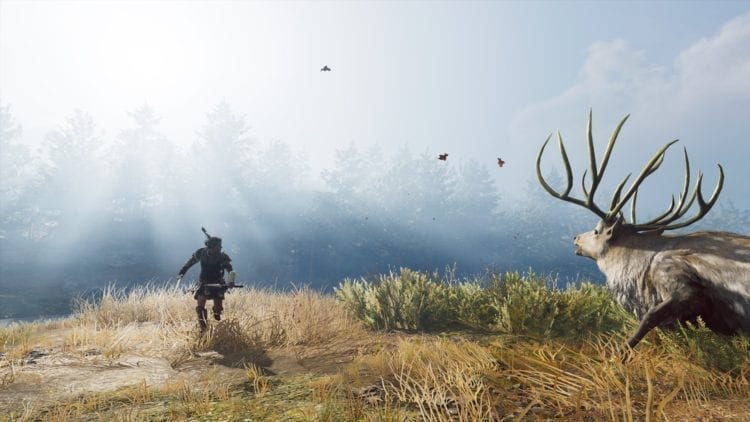 Numerous quests and locations to explore dot the world, be they a hidden tomb or an entrance to a legendary maze. You also get notifications whenever you visit actual historical locations that you can read up on whenever you feel like it. Even loading screen tooltips provide a few lessons to learn about the era. It’s those little details that amaze you. As one tooltip alludes to: The Greece we see today is all white marble, in ruins, lost in the sands of history; the Greece you see in-game is colorful, vibrant, and lifelike.

It will be a long time before I can visit Greece. Multiple responsibilities at home and a three-year-old to take care of mean that I’d have to put my European vacation on hold. But suffice to say, Assassin’s Creed Odyssey has fulfilled my need to have an engaging and authentic experience set during a time period that has inspired me since my childhood. Assassin’s Creed Odyssey makes it so easy to get lost in the wonder that is the bygone era of Greece.

With that, yours truly, the History Nerd bids you farewell. Until next time — look towards the future, live for the present, but love what is past.

By Kevin Carignan8 hours ago
Features

By Steven Wong12 hours ago
Features