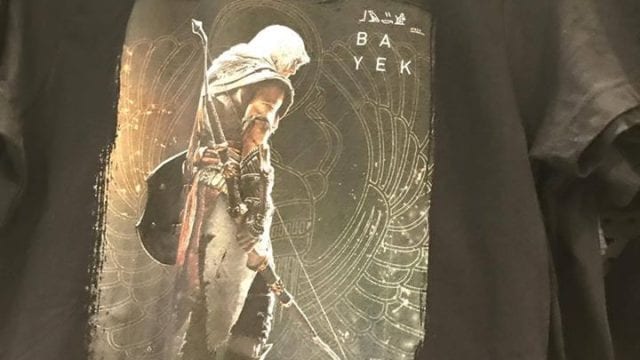 Game leaks come in all guises these days, and it looks like Assassin’s Creed Origins (the next one) has had its protagonist confirmed by a t-shirt. It’s not even absolutely confirmed yet that the next Assassin’s Creed is even called Origins (that’s the fairly concrete rumour), but here we are with an image of the lead character.

It comes from an Italian Facebook group for the game, and was sent to them by someone just going by ‘Alessandro‘ who took a photo in a Gamestop store. Granted, it could be a fake based on information from prior rumour leaks, but if that’s the case its made some pretty convincing stylistic choices. The protagonist’s name (previously leaked as Bayek) is stylised on the t-shirt as ‘Ba Yek’. In addition, the Ubisoft logo in the bottom right now has an Egyptian Eye of Ra/Horus (not sure which, exactly) added.

It’s supposedly the Black Flag team that are working on Assassin’s Creed Origins, and for that game they also altered the Ubisoft logo with the addition of a pirate skull. Assuming the rest of it is accurate, it looks like Bayek (or Ba Yek, or ‘By ‘Eck!’) will be predominantly using a bow and shield. This would, of course, pretty much confirm Ancient Egypt as the setting for the game too.

Expect a full reveal of Assassin’s Creed Origins (if that is the real title) at E3. If not before, at this rate. Here’s the full t-shirt image (click for larger). There’s a ‘leaked’ trailer going around today too, but that one is definitely a fake; the creator talks about it on his twitter feed. 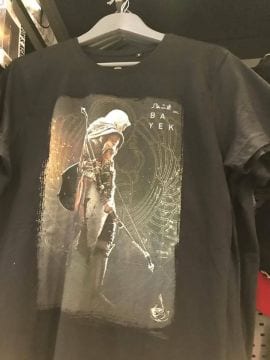