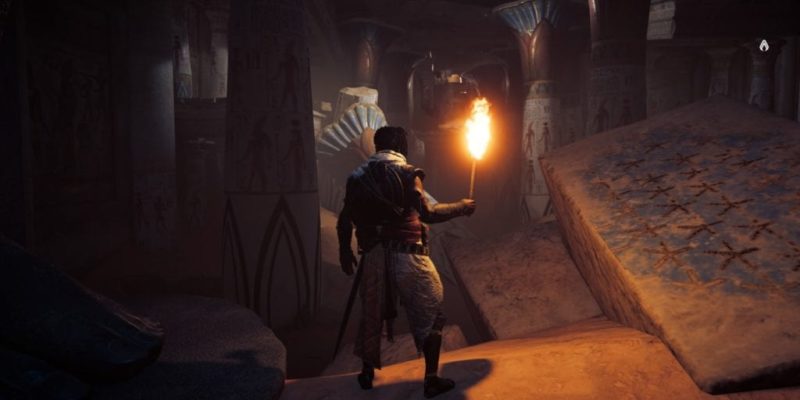 Ubisoft have provided notes for a forthcoming Assassin’s Creed Origins patch, which will take the game to version 1.05. This update will come to the PC, but the release date is currently listed as “to be confirmed”. It comes to consoles on 16 November and 20 November.

In terms of specific PC fixes in this coming patch, it looks like “hardware performance metrics” for AMD 2xx cards are being fixed, and some problems with Ultra HD, multi-monitor, and multi-GPU set-ups are being addressed as well. Good news for hairstyle fans too; you’ll be able to toggle Bayek’s hair/beard combo with keyboard commands, and get it to stick in-game.

The usual “performance and stability” improvements get a mention too, although the notes are a bit light on specifics there. Nothing about reduced CPU churn, but fingers crossed eh? Here are the notes for Assassin’s Creed Origins patch 1.05. It’ll likely be 1.3GB in size when it is released for PC.

Ambush at Sea – The issue that caused for some save games to be corrupted was fixed and the mission is now available to players again
Note: The mission should reappear on the map after a reboot of your system. Be sure to be connected to the online services while starting the game.
Difficulty – Enemies of a lower level than the playable character are now more challenging in Hard Mode.
Beard/Hair Toggle
Selected preference of beard/hair will remain saved now
Added support for Keyboard and mouse controls
[Shift]+[Z] – Hair
[Ctrl] + [Z] – Beard
Performance and Stability improvements on all platforms

Improved appearance of the water in caves
Removed some invisible collision in Siwa
Fixed various issues with the spawning of boats
Fixed a lighting issue in the Sunken Temple of Sarapeion
Fixed some floating NPCs, floating rocks, and other floating objects
Fixed various texturing issues