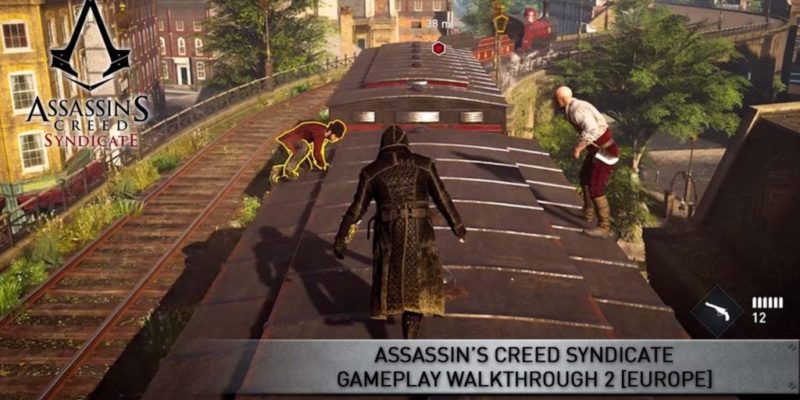 Anyway, it’s here, below (along with the CG trailer as well.)

In it, Jacob Frye goes after a typically haughty, Industrial Revolution-era Templar guy who’s been oppressing the working class like a massive bell-end. After beating up a burly bodyguard (and showing a bit of the new, short-range melee combat system,) Jacob gives chase on a horse-drawn carriage.

Carriage ramming and driving looks a little bit less silly than it did in the reveal video for Assassin’s Creed: Syndicate, so that’s reassuring. Syndicate will be the first game in the series to offer “fully systemic vehicles,” apparently.

Said vehicles include trains. Frye chases the Templar chap to London’s Victoria train station, which is basically an excuse to have a chase on the top of a moving train. I can only approve of this decision.

London’s looking rather pretty in the video, which both makes me pleased (because lovely graphics are nice,) and also worried (because Assassin’s Creed: Unity made a lot of PCs very upset and didn’t work terribly well.) Still, Ubisoft has had longer to work with the updated engine now, so hopefully that’ll count for something.

Here’s the gameplay walkthrough, followed by the aforementioned CG trailer.

Rainbow Six: Siege has single-player, might have a plot