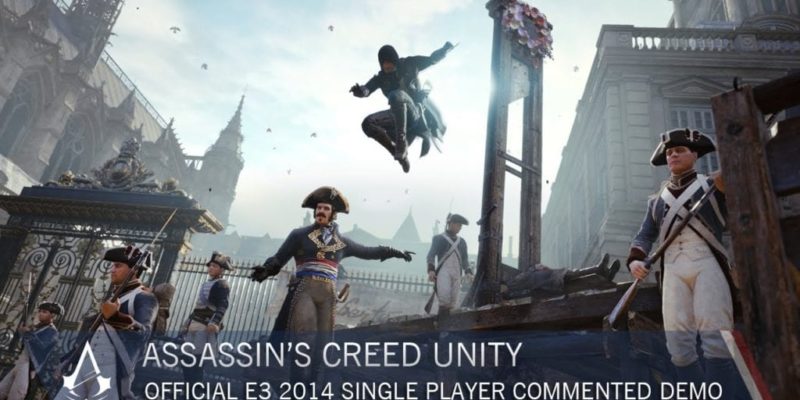 He’s French-Austrian, but sounds all British to me.

No prizes at all for predicting that Ubisoft would show more from Assassin’s Creed: Unity at their E3 event. Earlier in the day we saw some four player co-op at the Microsoft conference, but the Ubisoft show brought some single player gameplay, more about the protagonist Arno Dorian and a CG trailer with some Tears for Fears.

Let’s start with the eight minute gameplay demo, because that’s honestly the most important part. Arno is in Paris, amidst the upheaval of the French Revolution. As this is an Assassin’s Creed game, no doubt the Templars have had something to do with the chaos that’s consuming the city.

In the narrated gameplay, Arno is tasked with assassinating a fellow named Captain Xavier. Movement in Unity has supposedly been completely overhauled, and this is demonstrated as Arno leaves the top of Notre Dame Cathedral using the new “controlled descent” mechanics. Seems like Ubisoft is going to try to eliminate the old “oh god no, jump there you idiot!” or accidental climbing of objects present in previous Creed games.

As Tim pointed out with the co-op video earlier, Assassin’s Creed: Unity looks to have nailed the crowd scene. The streets of Paris are pretty packed, and the citizens will give you clues towards possible missions with their behaviour. Arno wanders into a building and picks up a “murder mystery” quest to attend to later.

Combat is said to be “much more challenging” in this game, although it’s tricky to see exactly how as Arno stabs his way into a social club he hopes will contain Captain Xavier. As an aside, it’s mentioned that you can enter many of the buildings in Paris.

While creeping around inside the club, it’s noted that Unity has a dedicated stealth mode. Crouching and sneaking around are now possible at the end of a button push.

Turns out Xavier wasn’t inside though, so Arno has to cross the rooftops of Paris to track him down at some nearby executions. 18th Century Paris should hopefully provide some satisfying buildings to climb; like the architecture of Florance or Venice in prior games.

Watch all of that in the gameplay video, below.

For more about protagonist Arno Dorian and his bag of tricks, you can take a look at this video. It doesn’t really explain how or why he sounds so British.

Assassin’s Creed: Unity will make its way to the PC on 28 October.