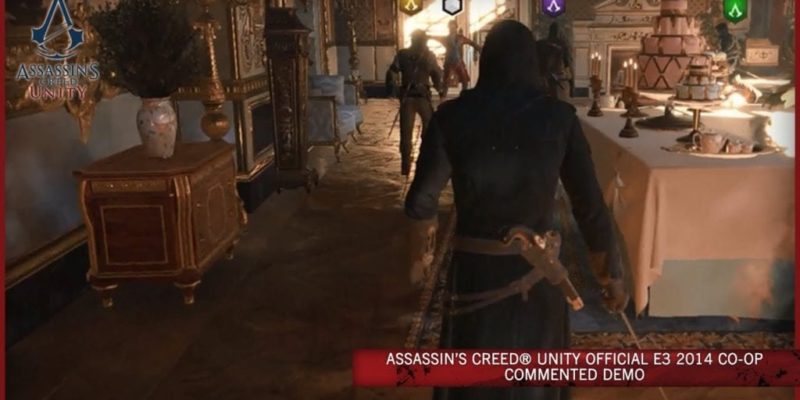 Just like this, only with four people perching moodily on the rooftops.

Ubisoft made a surprise appearance at Microsoft’s E3 conference, bringing with them some Assassin’s Creed: Unity news.

The French-themed Assassin’s Creed game will not only have the massive crowds that everyone anticipated (and, seriously, they do actually look quite big – probably at least a couple of hundred people strong, all of which functioned as crowd cover)… it’ll also have full four-player co-op.

This was shown off through a live Assassin’s Creed: Unity stage demo, with four people from Ubisoft attempting to assassinate a Marquis. There was lots of cover, and using other players as distractions, and then a massive brawl in a ballroom. Which culminated in murder on the dancefloor.

It’s not clear how this’ll tie into single-player, mind you – whether the multiplayer will allow free-roaming through the city, or if it’ll just be very specific missions – but Ubi did say that you’ll be forming your own brotherhood. So I suppose that indicates it’ll tie into single-player somewhat? Maybe? Oh, I don’t know. More details when they appear. I’m still hoping that there’ll be more to Assassin’s Creed: Unity than “prettier Assassin’s Creed with more people”, but eh.

By the same token, we’ll likely be sticking up a bootlegged version of this part of the presentation as soon as one becomes available, so you can watch the multi-assassin stuff for yourself. Hurrah!