Hello, and welcome to another edition of “does Assassin’s Creed: Unity work properly on the PC yet?” The short answer to that question is “not really, but Patch 4 might have helped some people a bit.”

The longer answer follows in the next 700 words or so.

I’m basically sat on the minimum suggested specs for Unity, so I’ve never been expecting or anticipating anything more than, say, 30fps with settings around the low-medium mark. Although, let’s not forget that Assassin’s Creed: Unity’s PC specs are grossly inflated in comparison with the contemporary consoles it’s (sort of) running on, and that every single other PS4/Xbox One cross-over (Ryse, Metal Gear Solid V: Ground Zeroes, Shadow of Mordor et al) runs at higher fidelity, and higher frame-rates, on this very machine. 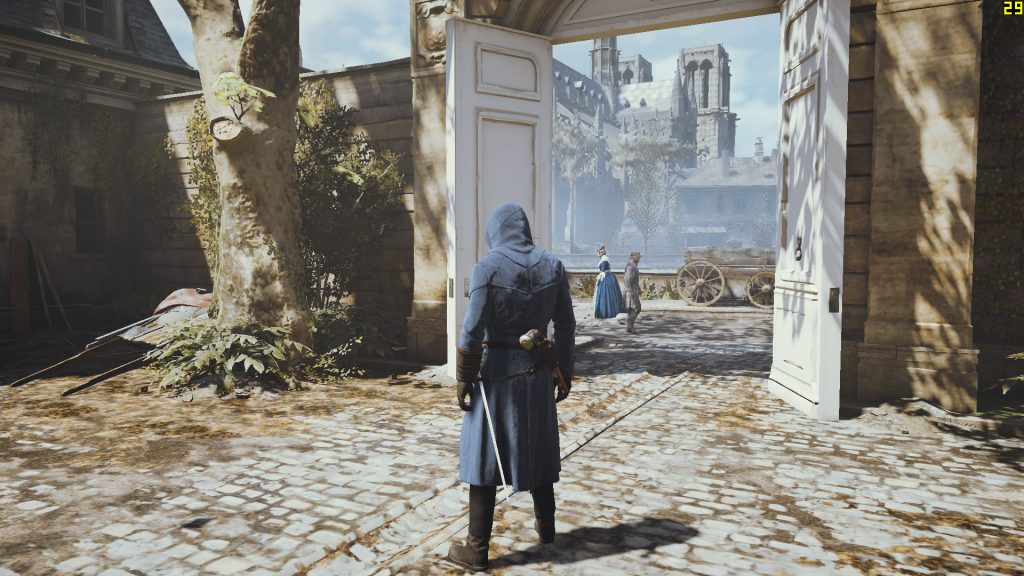 That draw distance is as impressive as ever.

Anyway, Patch 4 was released today through Uplay (hilariously, a day later than it appeared on Steam; the digital platform not owned by Ubisoft.) This is the one which supposedly addresses performance, so does it help?

That’s a question with as many answers as there are different PCs in the world, but judging by my own experiences today and Ubisoft’s own forums, Patch 4 is not the Assassin’s Creed: Unity performance panacea.

People are probably more likely to post if their experience with the new patch has been a negative one, but the breadth of complaints about continued stuttering, texture flickering, hitches, and crashes from both Nvidia and AMD users alike would seem to indicate a sizeable minority of disgruntled players. Players who have all manner of different PC set-ups, too. 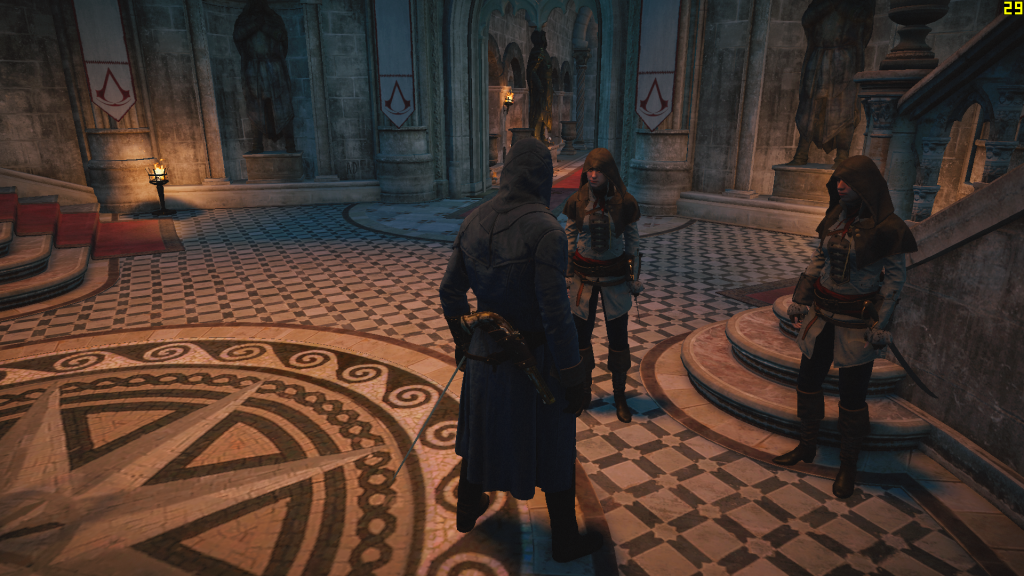 Indoor locations don’t destroy my frame-rate, so that’s an improvement.

In fact, what seemed to help me more than Patch 4 (which we’ll get on to shortly) were AMD’s new Omega driver set. They gave me moderate boosts at 1080p (3-4fps, but enough to nudge it close to that solid 30) in the denser parts of Paris and seemed to somewhat mitigate the weird gameplay pauses Unity was previously suffering from. Indoor locations stopped murdering my frame-rates quite so violently, too.

It still stuttered and hitched, and there were still frame-rate dips to the low 20s, but those latter events appeared (and maybe this was just placebo) to be less frequent.

In comparison, Patch 4 doesn’t seem to … have done much at all. The worst dips are still 22fps or so (except for the mega-stutters which tank it to the teens for a second or two, but these occur a lot less after the Omega update,) and the max FPS is still 60. But only when climbing something and looking at the sky. Realistically, the upper limits for me are in the 40s. 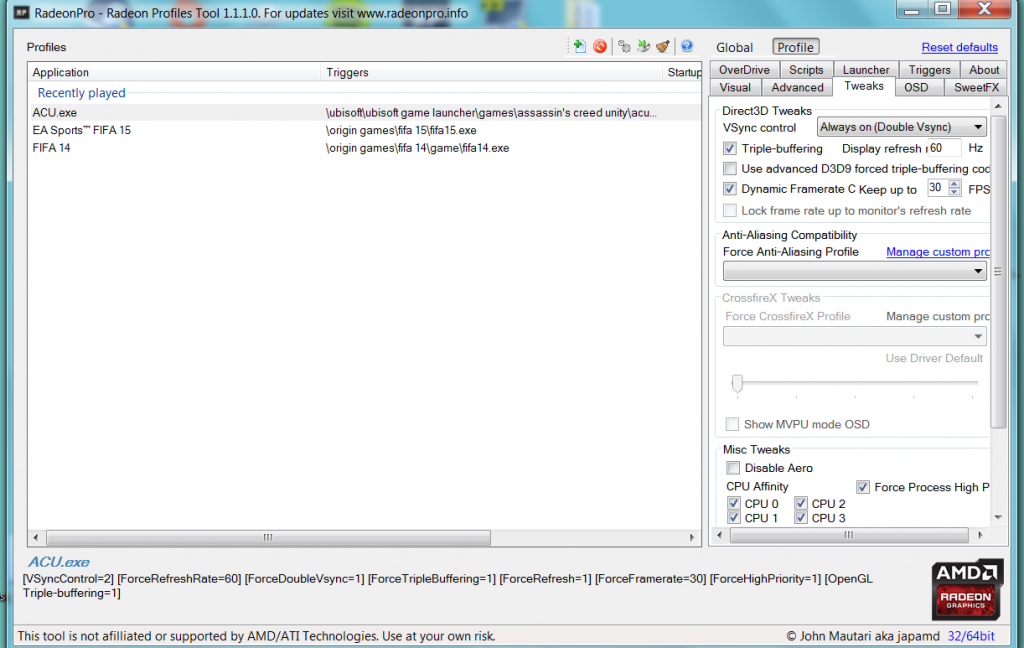 This doesn’t necessarily fix anything, but it does at least force the game into trying to keep a smooth 30fps.

I’ve actually started using RadeonPro (you can see my options in the shot above, click to enlarge) to just lock the frame-rate to 30, force the processors to high priority, utilise triple-buffering and so on. There’s no point having the game fluctuating from 25 to 45 all the time, and there’s no chance of me reaching 60.

What I find particularly maddening about Assassin’s Creed: Unity’s weird technical issues is that lowering settings really doesn’t produce much of a frame-rate boost at all. The difference between playing on all-low settings and the default “medium” set (albeit with anti-aliasing turned off, because that did have a performance cost) is absolutely nothing. Lowering texture and environment quality, as well as turning off SSAO, gives no performance boosts whatsoever. Even after a cold restart of the game.

This seems like a pretty basic failure to utilise the flexible scaling capabilities of the PC. 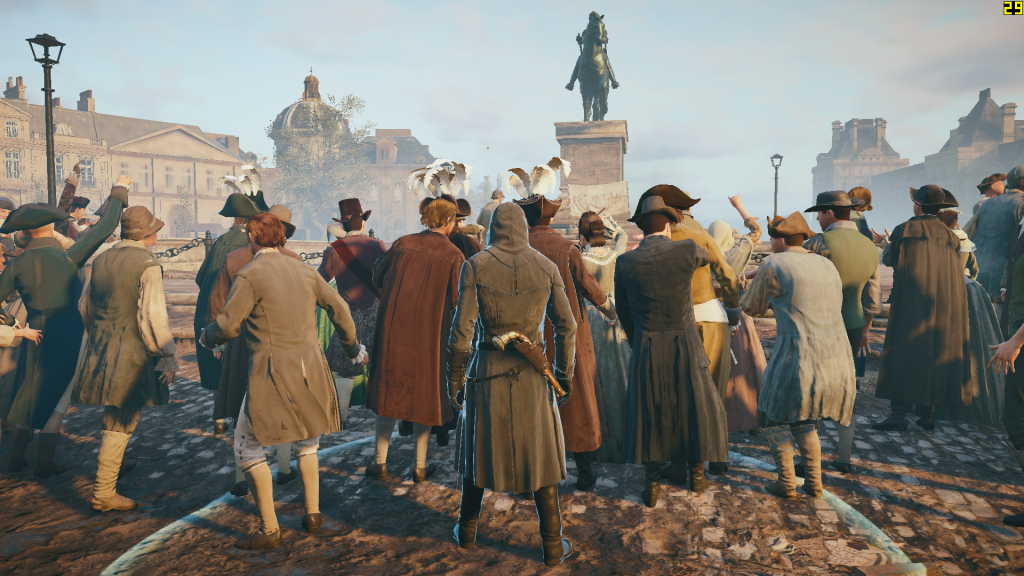 Quite what happened during the production of Assassin’s Creed: Unity, I don’t know. Perhaps it fell victim to 500 different Ubisoft studios working on individual pieces on it, or a rapidly looming Thanksgiving release window. Whatever the case, the game clearly still isn’t “right,” yet and may simply have fundamental, unsolvable technical problems at its core.

That Unity can actually look quite spectacular under certain conditions is scant consolation for the people who actually bought it, but still can’t run it properly. Perhaps more patches will help, but given that Watch Dogs was left in a fairly dire state for some PC players, I wouldn’t count on it. When the first breathless pre-order offers for Assassin’s Creed: Victorian London Edition start showing up next year, remember Ubisoft’s efforts in 2014 and put those wallets away.