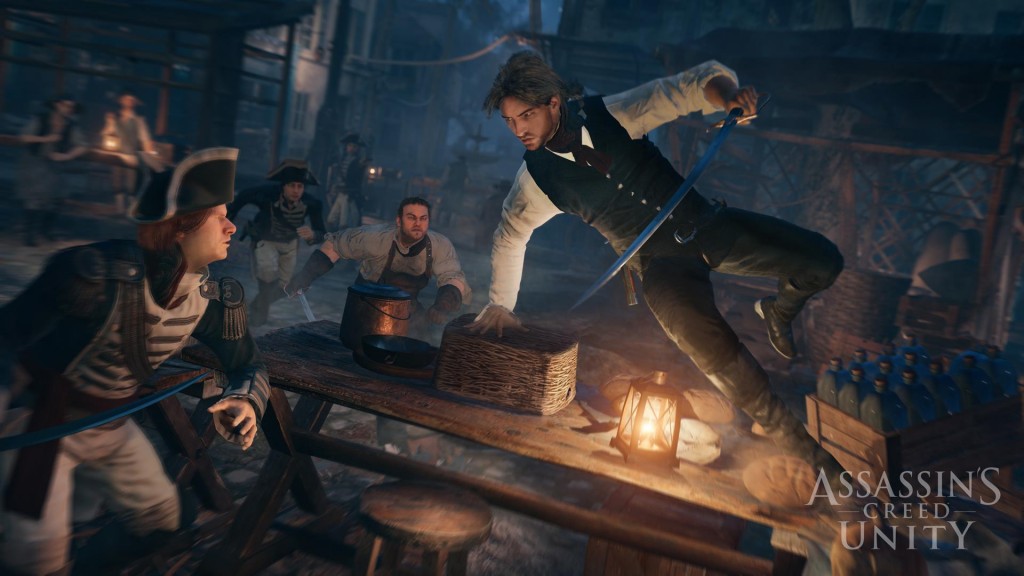 The table represents Steam and Arno represents Patch 4 … kind of. Uplay is the guy in the background trying to catch up.

For those who own Assassin’s Creed: Unity through Steam (so nobody in the UK, then,) the game should update to Patch 4 (1.4.0) today. For some reason, Uplay will not be getting it until tomorrow (19 December.)

Update 19 Dec: Patch 4 should be out on Uplay now. Also, it turns out Ubisoft’s games are back on UK Steam after all? How about that. Rest of the original story follows …

That information is based on this post on the relevant Steam forum, and the fact that people on Ubisoft’s PC Assassin’s Creed: Unity forums are reporting that the patch is downloading for them on Steam.

I’m not really sure why Ubisoft’s own platform is deploying the patch later than Steam is able to, but I find that quite funny.

Anyway, since I have the Uplay version I’m not really able to test whether Patch 4 (version 1.4.0) does anything for my own Assassin’s Creed: Unity performance (I might dip into it tomorrow if there’s time,) but reports from Ubisoft’s forums are on the mixed side.

Some are saying they aren’t noticing much difference regarding frame-rates, stuttering and the like. Others say certain areas of town (Notre Dame, etc) now run quite a bit smoother.

As a reminder: those who bought an Assassin’s Creed: Unity Season Pass are eligible to receive a free game by way of apology. You can claim that game by following these instructions. You have to relinquish your right to sue Ubisoft for anything though, so if you had big court plans you might want to hold off.

Everyone who owns Unity will be getting the Dead Kings DLC as a freebie, whenever that comes out.