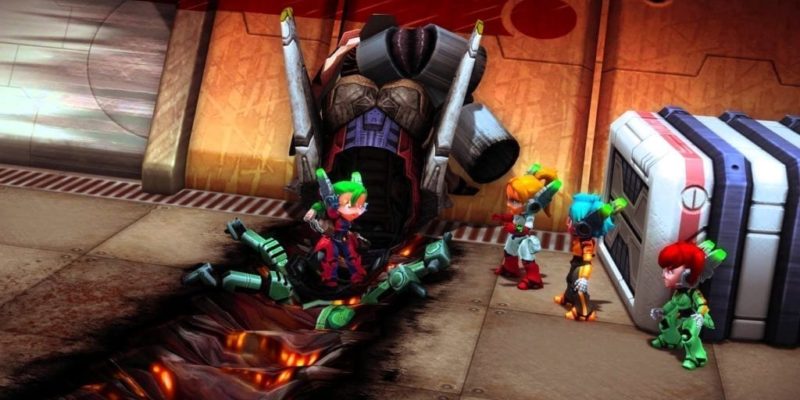 In Assault Android Cactus, you have the opportunity to take a playable cast of all female androids in order to investigate a distress beacon from a ship lost in deep space. Each android must battle against the hordes of robotic enemies using character specific primary skills and secondary weapons. This all occurs while navigating dynamic stages that are constantly introducing new elements.

You have four androids available at the beginning, with five more unlockable as you play. Witch Beam even teases an additional android that has yet to be unveiled that is awarded for beating the game. Each android comes with their own particular style of play, and as well, each impacts the story dialogue differently with their own personality as you play.

On top of giving players a campaign that offers support for up to four players, there is also an included boss rush mode so that you can try to run through all your favorite bosses once more as fast as possible. For those that really want more challenge, Assault Android Cactus also offers Daily Drive and Infinity Drive modes.

Infinity Drive is basically an endless waves mode where you attempt to survive as long as possible against the enemy. The Daily Drive on the other hand provides 10 randomly generated levels a day that every player has exactly one opportunity to beat. Every 24 hours, the Daily Drive resets with new levels and a new chance to succeed.

We made an arcade action game that took our favorite things about the twin sticks and shump genres and combined them into something new that I think fans of those games are going to love. We’ve been inspired by so many shooters over the years, from Robotron, to Ikaruga, and Resogun, and hope Assault Android Cactus will be as fondly remembered as those classics.
– Sanatana Mishra, director at Witch Beam

Assault Android Cactus is available now on Steam Early Access for $14.99 for Windows, Mac, and Linux.