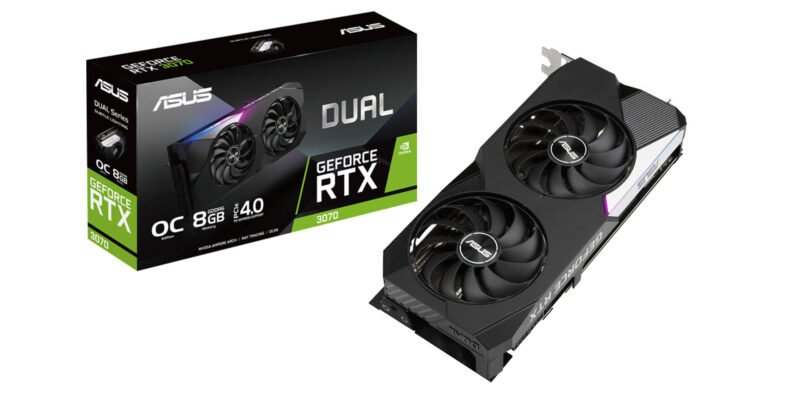 Consumers are still desperately trying to track down RTX 30 Series graphics cards for manufacturer pricing, though the prices are slowly coming down in secondary markets. Still, we’re only talking about the situation going from worse to bad. Even if the overwhelming demand was somehow satisfied and prices did return to what the AIBs are charging, it’s still not a pretty picture in comparison to Nvidia’s MSRPs and typical affordability. It seems that aspect of the situation is now getting a bit worse as well, because most of the affordable ASUS Dual graphics cards appear to no longer be available.

We’ve been closely monitoring the pricing and availability changes for the RTX 30 Series throughout its lifespan. Earlier this week, B&H Photo issued an email that announced the discontinuation of the ASUS Dual RTX 3070 OC. The message was as follows:

“You are receiving this message because you asked to be notified when this item becomes available. We regret to inform you that this item has unfortunately been discontinued. Please check back on our website for similar or possible replacement items.”

We initially signed up to receive notifications for this particular model a couple months back. We didn’t receive any prior updates on availability about it until the discontinuation email. Upon further investigation, we discovered that two additional ASUS Dual models including the RTX 3060 OC and RTX 3070 were also listed as discontinued.

On a side note, we noticed very few ASUS Dual units were sold in secondary markets such as eBay over the past several months, whereas other models remain very common. Of course, our personal observations in regards to availability cannot be taken as an accurate reflection of the overall market, though they do appear consistent with this discontinuation. 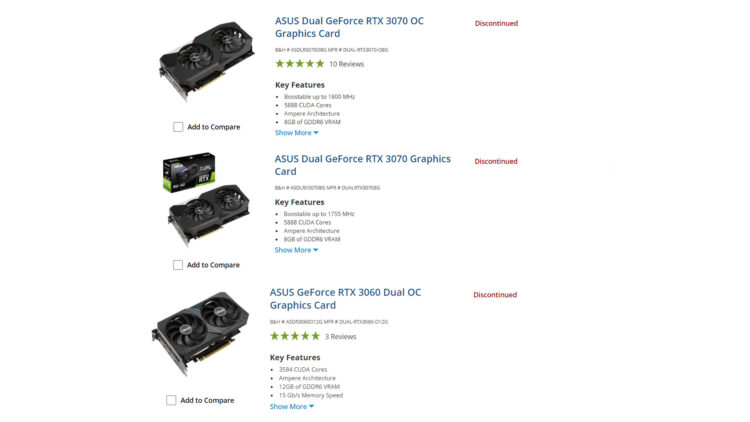 Where are the value models?

The initial conclusion to draw from this development is that ASUS is no longer interested in selling lower margin graphics cards to customers when it can prioritize premium models at significantly higher prices. However, there are certainly other possibilities for why the ASUS Dual graphics cards could be listed as discontinued on B&H Photo.

It’s known that there are various shortages going on right now. There could simply be issues with sourcing components for these particular models. It’s also possible that ASUS discovered an inherent flaw with the design and intends to replace the majority of its Dual graphics cards with something similar. After all, the Dual series was one of the first graphics cards lineups ASUS announced for the RTX 30 Series. It’s not uncommon for manufacturers to rush preliminary designs and learn ways to improve the products over time.

There’s also the possibility that B&H Photo listed these models incorrectly as discontinued. We reached out to B&H Photo for comment or confirmation, but the company didn’t provide a response. We also reached out to ASUS, but it failed to provide a response as well. Seeing as neither company is willing to comment on the discovery, you will have to draw your own conclusions about why ASUS has seemingly discontinued its most affordable lineup of RTX 30 Series graphics cards. The market demand seems like a pretty clear indicator of what’s going on though.