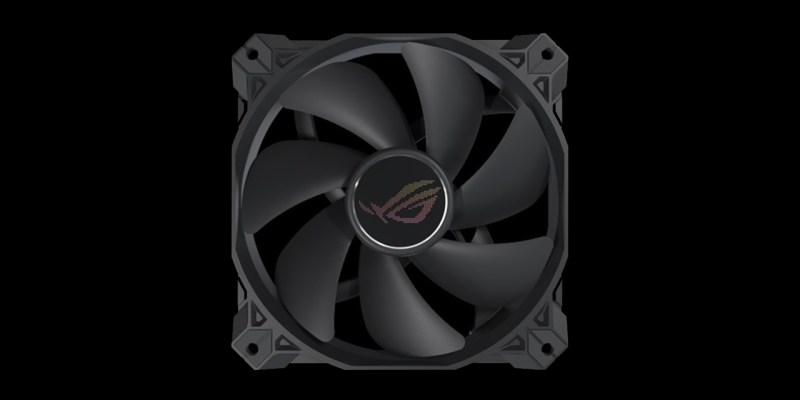 Cooling designs have significantly improved over the past several years as we’ve seen in various implementations such as PC cases and graphics cards. Manufacturers have not only learned more about how to efficiently channel air, but also to do so at minimal noise levels. The Noctua brand readily comes to mind for its recent acclaim, but other top brands aren’t about to let it steal the show. Asus has its own ROG Strix fan coming to market called the XF 120. It features “whisper-quiet” operation and will arrive sometime this April.

We still only have limited information about the new lineup from Asus, but it seems to be ready to compete in the enthusiast fan market for PC components. Yes, we’ve reached that level. In fact, we’ve been there thanks to premium features like RGB. Speaking of which, it seems the Asus ROG Strix XF 120 fan will also feature a few lighting effects, but that’s speculation based on what we can tell from the product images.

When it comes to specifications, we only know the basics. The ROG Strix XF 120 will feature a 120mm design on a 4-pin PWM connector for custom tuning. It is also rated at a healthy lifespan of 400,000 operating hours, a 22.5 dB(A) noise level (at a distance of one meter), air flow capacity of 62.5 CFM, and a static pressure of 3.07 mm H₂O. The RPM speeds vary from 250-1800 and features quiet fan curves. Asus mentioned that the XF 120 also uses magnetic-levitation technology to reduce friction and noise. You can expect rubberized anti-vibration pads and mounts too. 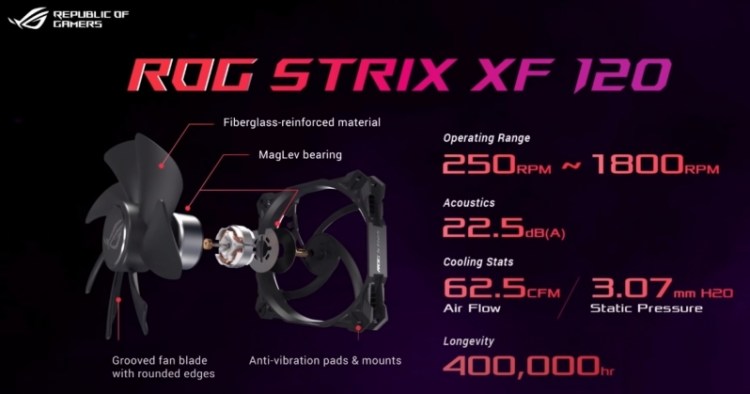 Asus doesn’t slap the ROG Strix branding on a shoddy product, so it will be interesting to see how this stacks up to industry-leading designs. We’re still waiting on pricing and to know what applications the fan is specifically designed for. This is likely a versatile design that can provide air flow or pressure, making it feasible for cases and radiators alike. Whatever the case, the Asus ROG Strix XF 120 should be enough to please ROG fans. As in the people. Not the product.