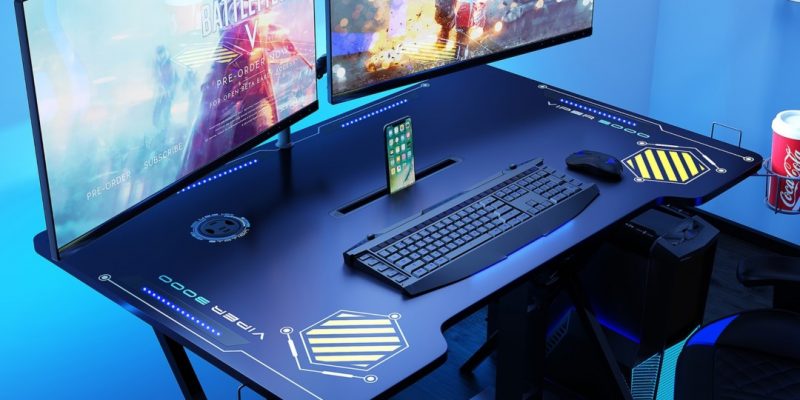 Atlantic is a company that’s no stranger to the gaming desk market. From entry level offerings to the higher end products, there’s something for almost anyone. The Atlantic Viper 3000 Gaming Desk is the company’s top-level desk for the gamer seeking both quality and vanity. And this desk gets close to reaching those heights. It’s also very blue.

When you first empty the box, it’s understandable to ask the question: “Is that it?” The Atlantic Viper 3000 comes with the desktop, two side frames, a stabling bar, and the additional racks. It assembled in five simple steps, and putting it together took just about a half an hour when accounting for unpacking and cleanup. It’s easily the quickest desk setup I’ve ever done.

The racks provided give you two holders for your headphones, VR headset, controller, or whatever you’d like. There’s a sturdy cup holder that can be placed on either corner in addition to an under rack for cable management and a power strip.

Other features include 48 blue LED lights on the top of the desk, and even a tablet/phone slot in the middle of the desk with bottom openings for charging cables. Of all the features, however, the best has to be the included USB 3.0 hub that sits in the top. The circular hub hosts three extra ports with enough power to charge your devices, connect controllers and transfer data at one time. I found little transfer speed delay when using the hub compared to plugging directly into my PC. USB hubs are a Godsend for many, and the built in one in the Viper 3000 is top quality.

Quality — with some cutbacks

Now that we have the extras covered, it’s time to take a look at the Viper 3000 desk itself. The desk stands 29-inches tall, 45-inches wide and 29-inches deep. It fits nicely into almost any sized space, and is large enough to comfortably sit two 27-inch monitors side-by-side. The desk is made of common wood composite with a black PVC laminate finish. The finish has a light blue “circuit” trim on the perimeter that may look tacky to some. I actually happen to like the vibe it gives when paired with the LED lighting. I can’t say the same, however, for those who don’t like blue. 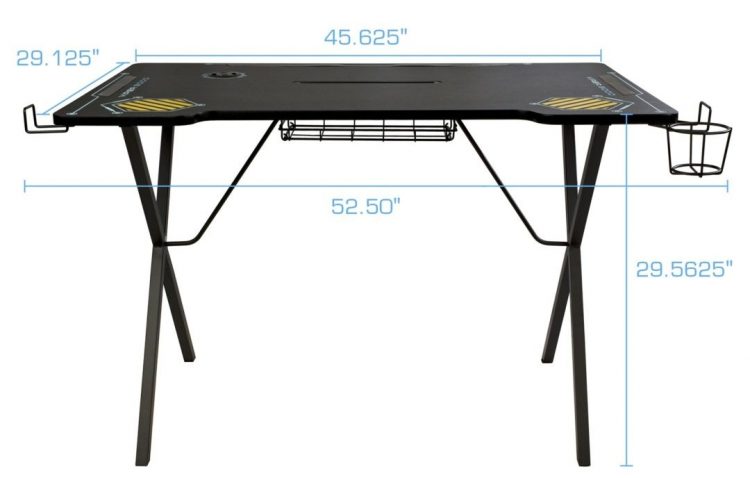 Despite the few parts needed for assembly, it’s a reliably sturdy desk that supports a max weight of up to 88 lbs. If you are a single-monitor user, you should have no problem sitting your computer, monitor, and other peripherals on top with some room to spare.

On the negatives, the lack of storage can be troublesome for those who need as much stash room as possible. The aforementioned basket for power strip and cable management is solid, but there’s plenty of space underneath where a second drawer could’ve been added — not unlike Atlantic’s cheaper Gaming Desk Pro. There’s also no shelf for tower placement. If you decide not to have the tower sit on your desk, make sure you invest in a tower cart or have another location.

For the LEDs, they’re a nice touch to the aesthetics of the desk. It just would be nice if there was a simple a way to adjust the hues, rather than being a single blue color. There is a way around it if you are comfortable with opening up the seal and replacing the LEDs yourself. Most people, though, won’t even want to attempt it.

Overall, the Viper 3000 is a desk that doesn’t try to be something it’s not. It’s fairly basic from a features standpoint, but does everything advertised well. The quality USB hub will be the most endearing feature for many, and it’s a comfortable sit at no matter your height or the height of your chair.

If you need storage or shelving, however, this isn’t going to be one you should gravitate towards. But, if you’re just looking for a desk that looks good (and if you really like blue), is reliable, and can comfortably support you and all you need on it, the Viper 3000 is definitely worth the look.

Those interested in the Viper 3000 can pick it up today right on the company’s online store where it can be had, at times, for as low as $189 USD.

The Viper 3000 is a good desk that sports impressive build quality. It is just missing a few things that keep it from being great.
7.5