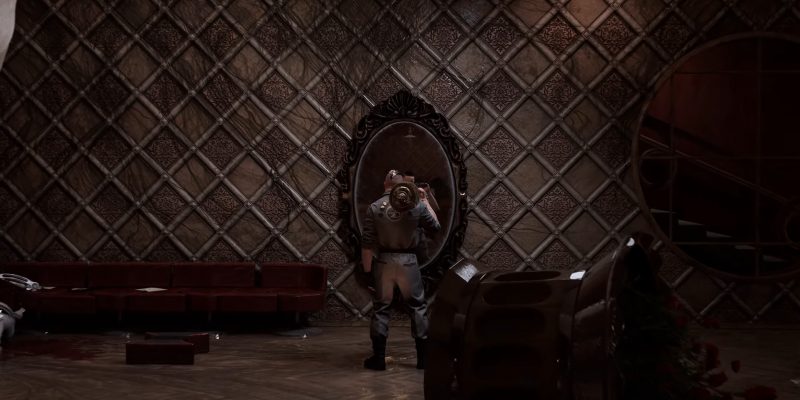 Another trailer has released for Atomic Heart, but this time, there are not as many glimpses into the strange Soviet base. Instead, it’s a tech trailer, highlighting the game’s looks when Atomic Heart is running with ray tracing (as brought to you by Nvidia). However, it’s impossible to ignore some of the striking imagery in the trailer and not link it back to past trailers.

The latest trailer has Soviet agent and player character P-3 staring into a mirror. He’s wielding a melee weapon that we’ve seen before, one with two sawblades at its head. Of course, his reflection is spot on, as are the strange creatures walking on the pathway above him. One, with its head split open has green leaves flapping along with a displaced tongue, its guts pouring out of its shirt. The camera then rotates, showing a large group of tiny ballerina mannequins before focusing on one enormous one.

We also get to see a little bit of gameplay here, and the BioShock vibes are definitely kicking in. In the first five seconds of gameplay footage, we can see P-3 fire frost from his hand, freezing an enemy. Later on, he seems to use telekinesis to lift two monsters into the air. There’s not a whole lot past that, but it’ll have to do until the next trailer for Atomic Heart finally arrives. The mysterious game from Mundfish is currently without a release date.