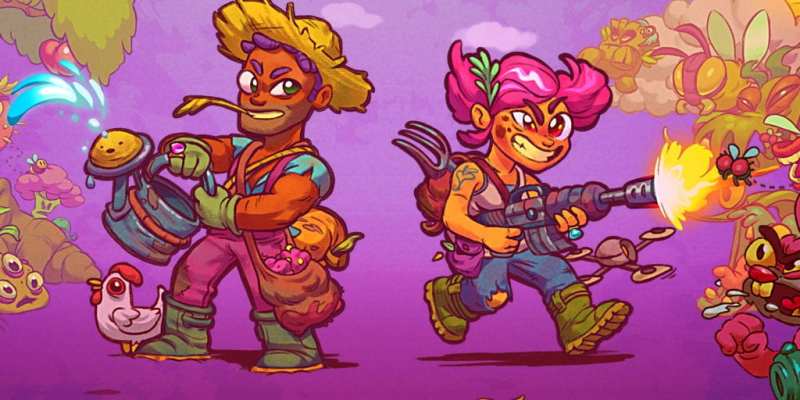 Atomicrops is the kind of game that you’ll play over-and-over again and still be met with new challenges. The game features 10 standard years (levels) to complete with each year ratcheting up the difficulty. However, if you make the right preparations before each bout with a boss, you’ll save yourself some time and energy if you’ve got the right tool in-hand. The default Pea Shooter will only get you so far even with your fighting stats increased.

Here is our guide for the best guns to take down the first three bosses in Atomicrops. See our full review here.

The first thing you’ll notice in Atomicrops is that you are working against the clock. You only really have two days of farming to generate enough Cashews to buy new weapons. So, it’s best that you get the biggest yield from your crops on day one or two. This is also dependent on how you use one of the two main characters. 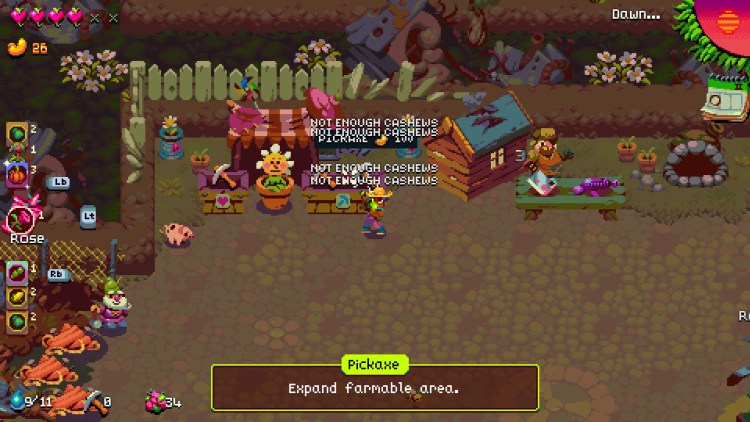 If you’re sticking with Lavender — who has a 20% increase in farming abilities — then it would be wise to wait until the second day to buy a weapon prior to the boss battle. Lavender’s guns deteriorate after a single day’s use, scrapping any mods purchased. You’ll need to farm and loot as quickly as possible. The gun store options are randomized, however, there’s usually at least one of the preferred weapons available in the first three stages. 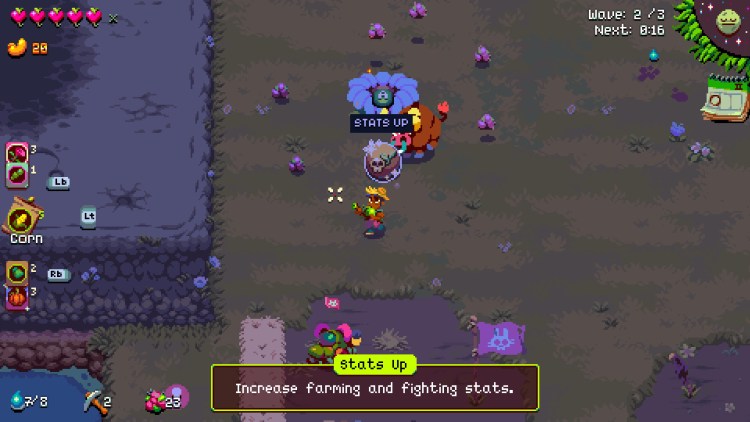 Once you unlock Rye, who is more of the offensive type, you’ll get guns that last for two days. This doesn’t sound like that big of a deal, but, when you start upgrading weapons, buying seeds for money to get weapons, and looting camps–it all comes full-circle back to the kind of heat you’re packin’.

Doesn’t sound that bad, right? Right. The first boss you’ll encounter is Monstropod. They’re a spiked, buck-toothed snail-o-thing that mostly scoots around the outsides of the map while making its way back to the center of the circle: your farm. Monstopod hovers close to your farm and you’ll want to shoo ’em away as quickly as possible. If you’ve got seeds planted, the spiked snail will leave behind caterpillar-type creatures that turn your farm goods into mulch. Two weapons that I’ve found useful for the first match up are the Spud Gun assault rifle and Jackrabbit 12 automatic shotgun. 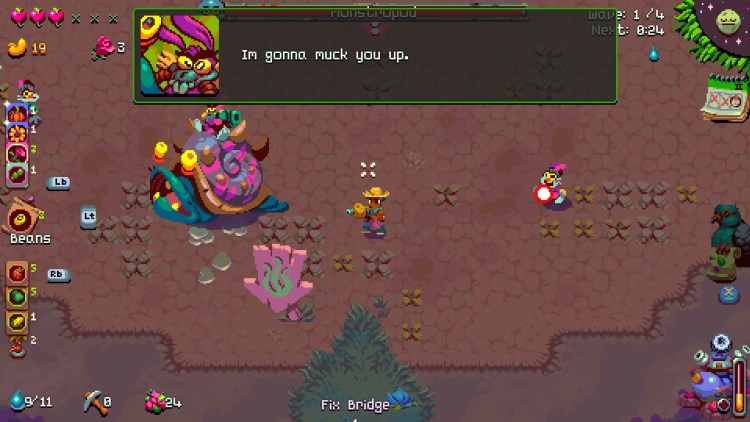 For the Spud Gun, it’s more about distance than anything else. Once you’ve upgraded it, though, it does have much more powerful rounds and even the ability of homing fire. This is useful for up-close enemies at your farm, but, when it comes to Monstropod, you can hit him whether he’s in your face or scurried away. And, it packs quite the punch if you’re using it to loot more seeds or crop enhancements. 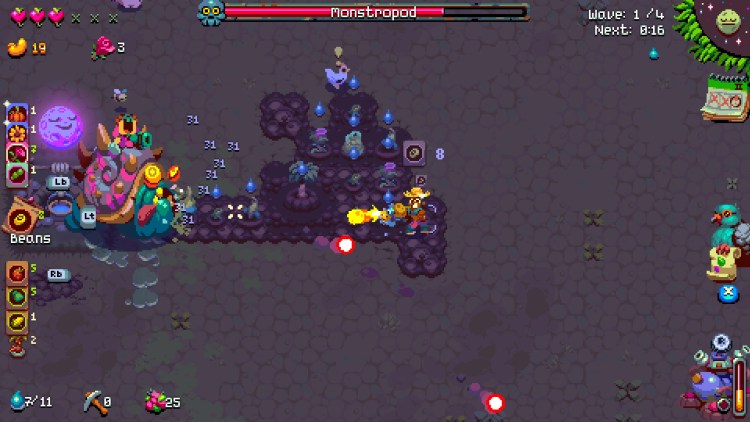 The Jackrabbit 12 is much different in that you’ll get a lot of powerful spread at close range. It’s the perfect tool to get the jump on a sleeping camp of Blunderbunnies or even loot an entire quadrant on your map. As you continue to upgrade the Jackrabbit 12, its shot becomes more powerful, and with a bigger clip to boot. The only thing you really have to monitor is its recharge time. As you get familiar with it, taking down Monstropod becomes a breeze. Plus, you’ll want to increase the likelihood you get a different gun for the next boss.

Yes, folks, the leading cause of Melanoma in humans has arrived to wreck your farm. Who is this threat? Well, none other than a giant meatball of fire by the name of Sol Crusher. At first, it will seem like its movements are sporadic around the map. But you’ll start to get a rhythm as to where it’s heading next. And, if it starts going towards the center, it’ll burn your farm. When this happens, it’s even more crucial that you get it away ASAP. To do this, the best weapon I’ve found has been the Rusty SMG — hands down. 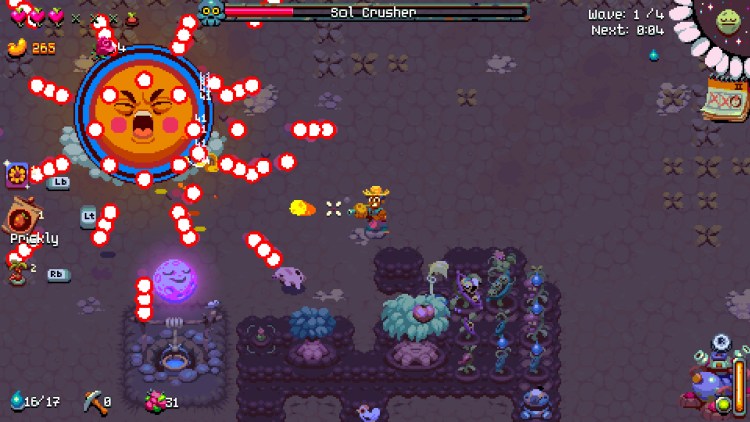 The Rusty SMG handles the second boss battle for a few reasons. For one, the upgraded firepower makes attacking camps in Atomicrops much easier. At this point, you’ll have probably earned a couple of upgrades, farm animals, or companions. Using the Rusty SMG to finish up each of the initial quadrants will help ensure you’ve got every seed and Heartbeat possible.

The second reason is merely for its rapid-fire capabilities. Although it is only effective at very short range, it’s doing a lot of medium damage at a high rate. And, by now you should be accustomed to your character and enemy movement. So, laying down fire at close range while avoiding projectiles, obstacles, and enemies should be manageable. Because, before you know it, it’s back to the farm. And that means suns out, guns out. The Rusty SMG not only proves useful in Sol Crusher’s initial attack run but, it’s just as useful during the second phase. 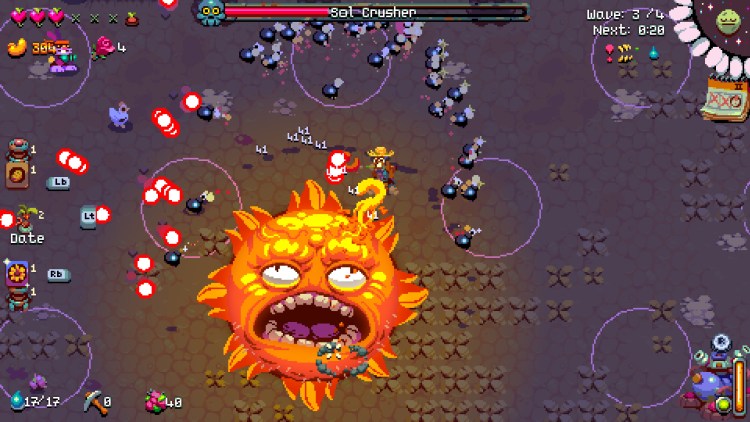 I’m not quite sure whose farm it was before Lavender or Rye ever set their boots on it. Atomicrops plops you right in the middle of endless waves of enemies in the name of your f-a-r-m. But, Old Mech-Donald claims it’s his. And he’ll throw everything he’s got at you to get you to scram. You’ll get wafts of exhaust, and he even furiously hurls tires, too. The best way to nip this boss in the bud is with two weapons previously mentioned, the Spud Gun or the Rusty SMG. 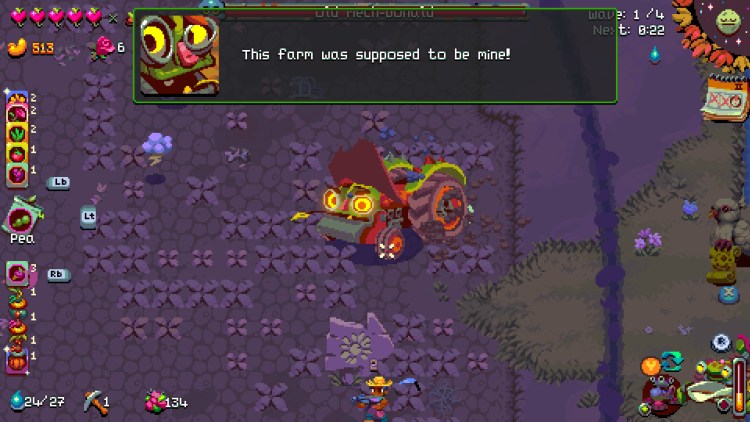 The Spud Gun does well here for the same reason it was so effective against Monstropod. Old Mech-Donald moves in a square around your farm before racing off in all kinds of directions. This means that you’ll only have a few times to lay into him. You would think that the Jackrabbit 12 would be sufficient for the job. The only downside to that gun is its reload time. If you’ve got approaching enemies, you’ll end up wasting shots on them and not Old Mech-Donald. The Spud Gun instead reduces the distance, allowing you to get shots in while close or downrange. 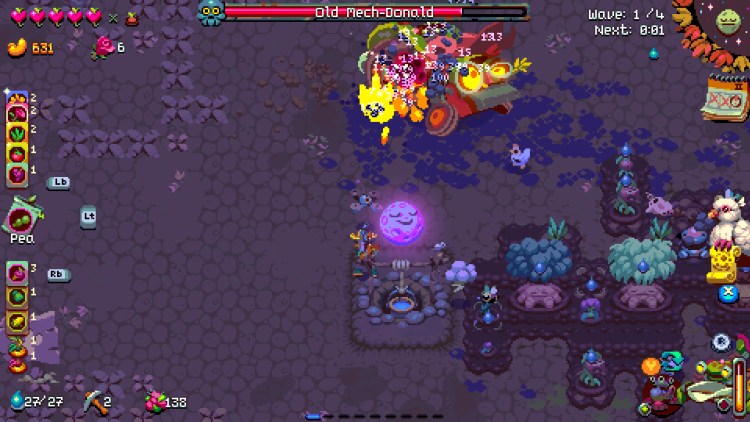 As previously mentioned, the Rusty SMG deals great damage at short range. When Old Mech-Donald starts his square sprints around your farm, follow and shoot him with the Rusty SMG. If you’ve managed to get any sort of stat increase or horse to ride, then you’ll be able to sprint near him when he peels out and drives off. Then, you’ll have another chance when he returns to destroy your farm.

If you’ve got the patience — and fortitude- – to dodge enemy fire, flinging squirrels or the butcher knife deal can deal some heavy damage. But, out of all the guns used, I found these to be the least enjoyable for my tastes. But to squeak their own.

Wraith: The Oblivion – Afterlife is a VR game set in the World of Darkness