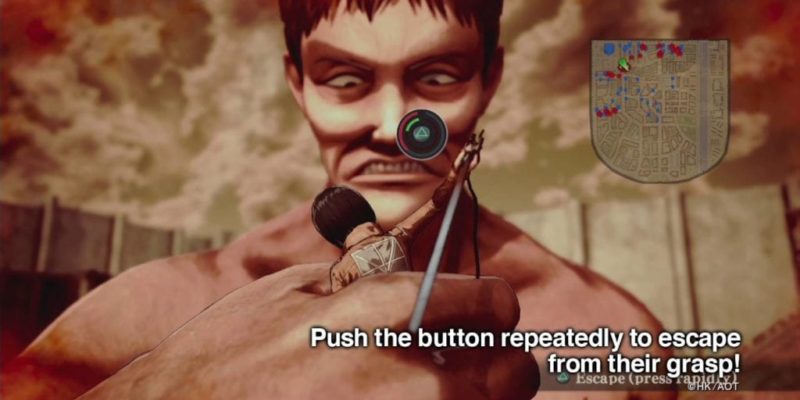 Tecmo Koei’s upcoming Attack on Titan release will have an online multiplayer ‘Scout’ mode, in which up to three people can be recruited for some Titan-slashing action.

These multiplayer missions are said to be separate from the main campaign, but presumably any levelling up you do on these jaunts outside the city walls will carry over to single player characters. Scout Mode missions will take place on a variety of stages, including “the Forest of Giant Trees, the Ruined Town, a Farm Village and even the Stohess District”.

The new trailer released today isn’t focused on Scout Mode, oddly enough. Instead, it’s a gameplay footage overview of some of the mechanics of fighting in Attack on Titan. If you get grabbed by a Titan, you need to button mash to get away. Getting near to death slows down time for a bit, so you can (hopefully) get away. The trailer also shows the recruitment of (AI) allies to help with battles.

Performing actions and attacks gradually builds up your ‘Decisive Battle Signal’ which, when activated, is pretty much your ‘murder mode’ Musou button. Attack on Titan will be released on PC on 30 August.