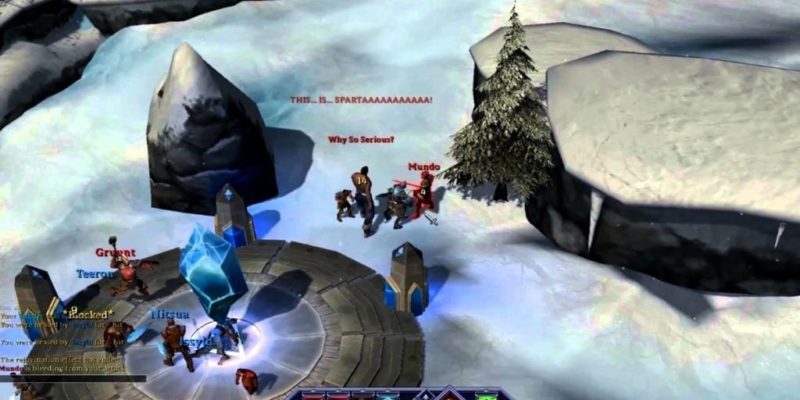 Citadel Studios, an independent video game development studio formed by industry veterans with backgrounds on some of the most influential MMO and RPG series of all time, today officially unveils Shards to the public for the first time. In development for approximately eight months, Shards’ playable pre-alpha version was declared MMORPG’s Top Indie MMO of PAX East 2014, and is the first step towards Citadel’s goal of releasing the first-ever player-run MMO. The much-anticipated game can now be seen in action for the first time, with screenshots, gameplay video and full details available on the new Shards Kickstarter page, accessible here.

“What Shards means to us is infinite possibilities – possibilities for us to give gamers, and for them to give themselves,” said Derek Brinkmann, CEO and co-founder, Citadel Studios. “Ultimately, we aren’t just creating game that fosters a single player community, instead, we are giving our players the tools to create their own in-game communities.”

In a vast multiverse amidst the chaos of competing deities and demigods, universes lie waiting to be explored – and created. Featuring their own rules, mechanics and histories, players will explore these “shards,” seek their treasures, and learn new skills and abilities from their current and past civilizations. At launch, Shards Online will feature a wide variety of official rulesets, while players will additionally be able to create and share their own. Anything from a hardcore PvP experience to a shard in which players can only farm is possible. Gamers can run their own server, creating live content for mortal players as gods, or jump into other servers and take advantage of open-ended character development, customizable housing, tactical combat and more in living virtual worlds. Various maps will range from high fantasy and sci-fi, to the wild west, jungles, dinosaurs and beyond.

“The decision to go with crowdfunding was pretty simple, actually. We want to give players freedom. Big companies and publishers don’t like player freedom,” said Tim Cotten, creative director and co-founder, Citadel Studios. “So the only logical way to make Shards a reality is to stay independent. And the only way to achieve a massive scale independently is to bring our fans onboard up front.”

Kickstarter incentives will offer backers early access to the forums, the alpha (slated to launch by the end of 2014), the admin program and the early builders program, among other exclusive early access opportunities. Backers can also snag free premium subscriptions, special weapons and armor, their likeness in the game, featured cluster status, VIP parties with the development team, game boxes, maps and more. By donating to the Shards Kickstarter, you’re not just helping make the game, you’re becoming part of it.

Citadel was founded by game industry veterans Derek Brinkmann, Chris Ondrus and Tim Cotten, and surrounded by a talented team with a combined 40+ years of development experience on RPG classics like the Elder Scrollsseries, Ultima Online, Dark Age of Camelot and Warhammer Online. Its founders believe in fostering rich, passionate communities that can make meaningful contributions to worlds that live and breathe.