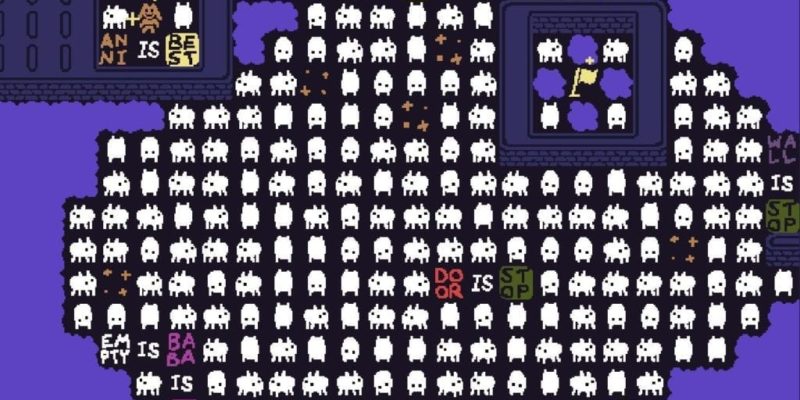 Puzzle games have a reputation for cramming players into seemingly unwinnable situations, and Baba Is You, an indie game from Finnish developer Hempuli Oy, is no exception. The magic behind these complex puzzles lies in the ability to misdirect players. Trick players into looking in the wrong direction, and they will struggle for hours until they discover that trickery.

Baba Is You began as a small project for the Nordic Game Jam in 2017. In the Jam version (which is available for free), the player controls Baba, a robot who pushes around text on the screen to change the in-game rules. Even though the game was relatively short, Baba Is You captivated players, winning first place in the Nordic Game Jam. 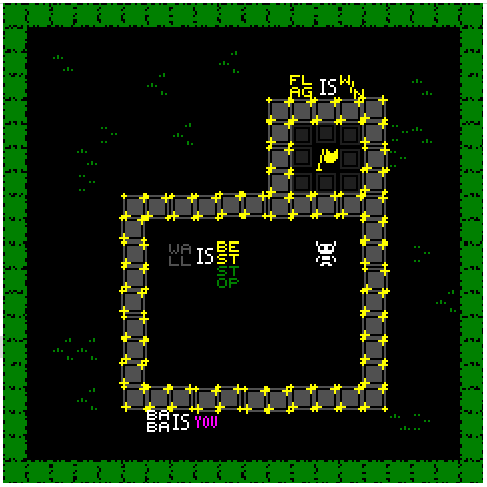 Hempuli Oy has now released the final version of the game. Baba the sheep replaced the robot, graphics received a major upgrade, and the developer added a chill soundtrack. Most notable, though, is that the game became difficult.

A quick search for Baba Is You on Twitter shows equal amounts of praise and frustration. The game appears simple enough, but solutions are rarely obvious, especially after the first area of the game.

In most of these cases, players already know the basic rules of the grammar in the game, and they’ve seen mechanics that appear in the most difficult stages. However, like many great puzzle games, the stages are set up intentionally to misdirect players’ attention, drawing them away from solutions.

The Magic Of Misdirection

I’ve always been captivated by magic shows, and I’ve dabbled with learning a few tricks. In general, I know tricks that only work on children – they rarely know when they’re being fooled. The most important aspect of magic is the sleight-of-hand – in essence, get the audience to look at your right hand, and they’ll miss what’s happening with your left. Here, the magic lies in concealing that misdirection.

Baba Is You has a digital form of sleight-of-hand, one that points players towards obvious solutions that – because of a small twist – do not work. The level “Evaporating River” caught me with that trick. I spent hours working on the level and was only able to figure it out the next day. All of this frustration came from the subtle setup of the level. 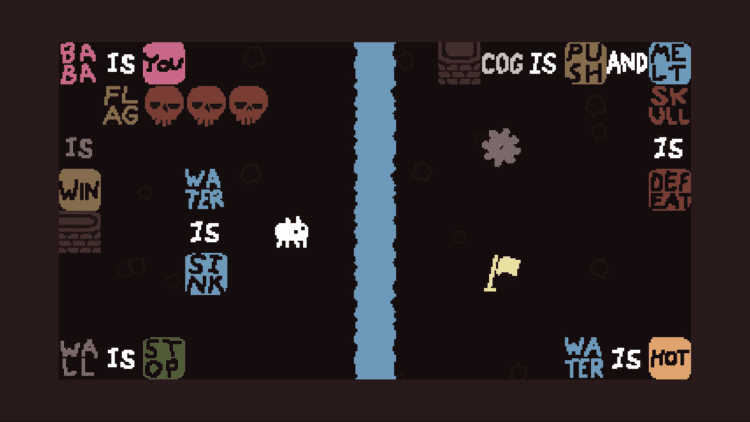 Create the phrase “Flag Is Win,” then walk onto the flag.

If you haven’t played the game, the text may look confusing. Here’s a quick run-down of the important rules in play:

We’re going to discuss how this level messes with you, so spoiler warning if you haven’t figured it out yet.

This stage’s main misdirection comes with the three skulls at the top. The obvious approach would be to place the words inside the skulls then get something to push the entire row to the left. You can push the cog, so it would work.

But the river melts the cog. Only by destroying part of the river can the cog move to the left side.

One particularly evil misdirection also comes with the stages leading up to “Evaporating River.” Specifically, many of those stages either have floating text or lack the “Water Is Sink” property. Players earlier learn that text can sink and eliminate water, but due to not having it for several stages, most players forget that rule. An easier starting point would have the “Water Is Sink” horizontally on the right side of the river; one push to the left, and the word “Water” eliminates a section of the river. 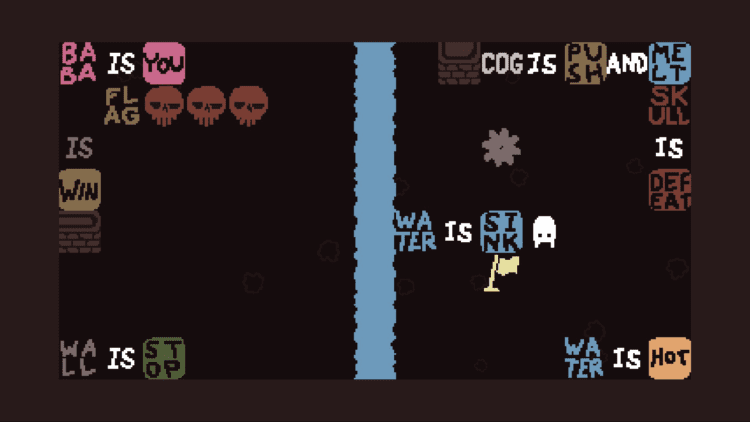 To get to this point, players deconstruct and reconstruct the phrase “Water Is You.” The reconstruction especially tricks players.

Layered on top of that is the initial structure of “Water Is Sink.” At the beginning of the stage, the phrase appears vertically. If the phrase were horizontal, players may accidentally push it into the river, refreshing the “Sink” mechanic in their minds. Placing the phrase vertically makes that happy accident extremely unlikely.

However, the sleight-of-hand gets even more sinister – the previous levels focus on using objects and text to push other objects and text. Players inherently expect the game to repeat this mechanic here; however, this is not used as the solution. Instead, players push the cog into the left skull, use “Cog Is Sink” to eliminate that skull, then push “Flag” using Baba herself. 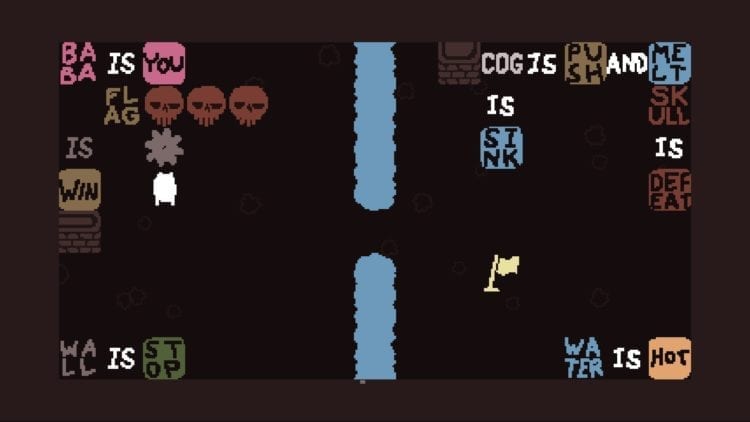 Pushing text through the skulls is unneeded. This cog will destroy the left skull, allowing Baba to pass through unharmed.

Throw in the other red herrings (“Flag Is Water,” “Cog Is Water,” and “Water is Defeat,” to name a few), and this puzzle has a dozen ways to distract the player.

Many other puzzle classics such as Snakebird have similar misdirection. In Snakebird, the goal is simple – eat fruit, grow longer, and get all Snakebirds into the rainbow portal. Gravity, spikes, and pits constitute the obvious obstacles, but the level design creates the true difficulty. The levels look simple. The levels feel easy. But once players attempt the levels, they’ll know they’ve been deceived. 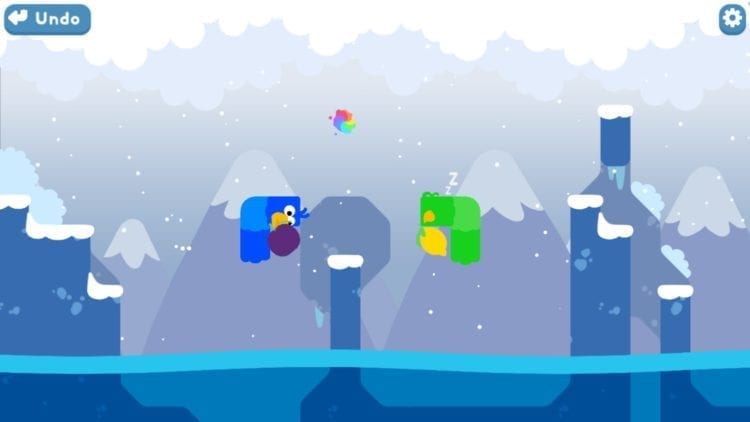 Snakebird levels often appear simple but turn out to be infuriatingly difficult.

In a way, Baba Is You shares that illusion of simplicity. Instead of merely adding to the rule set with new mechanics, though, the game constantly shifts the rules around – grass that’s a background object in one level can easily become deadly in another. The stages repeat mechanics players learned before, but those mechanics often lead to dead ends. Players learn that helpful tools can be harmful; that figurative arrows don’t always point to the exit.

The thrill of magic tricks comes from the illusion – the sense that a rabbit really did come from an empty hat. For puzzle games, the joy comes from discovering those tricks and dispelling the illusion of impossibility. Although Baba Is You grants a unique approach puzzle solving, it captures the magic that comes from conquering the impossible.