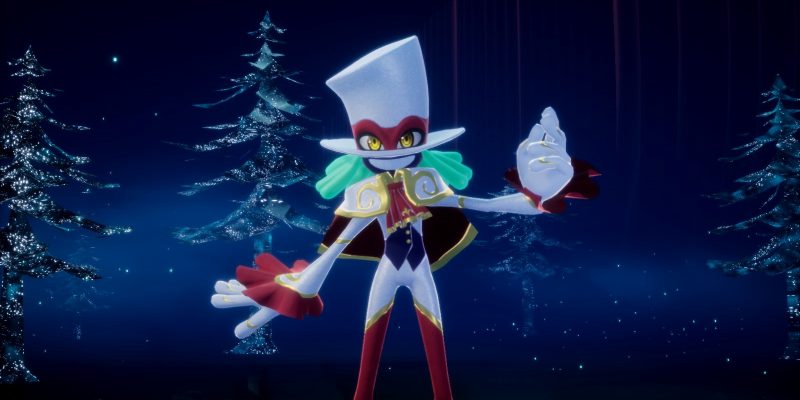 Up to this point, everything surrounding Balan Wonderworld seemed to tick all of the right boxes. It was rich in color and style, accompanied by jazzy tunes and nostalgic platforming feels. It seemed like it could have been one of those stand-out games of the year, for me anyway. The announcement trailer showcased a whimsical world of magic and the right amount of curiosity to have me intrigued. It left me wondering what type of gameplay the entire experience had in store. On top of that, veteran duo Yuji Naka (Sonic the Hedgehog) and Naoto Ohshima (Sonic the Hedgehog, Nights into Dreams) came together for the first time in 20 years to work on the new project.

In the months following the initial announcement reveal, Balan Wonderworld received additional trailers that showcased gameplay. The developers even revealed its opening cinematic. Things were starting to look more and more promising for this spiritual successor to the Nights franchise. The recent playable demo launch was something I had marked my calendar for and was looking forward to in order to justify my interest and hype in Balan Wonderworld.

After playing through the Balan Wonderworld demo though, I’m struggling to really even put into words the utter flurry of confusion that I’ve experienced. From a farmer saving his sole stalk of corn to oversimplified gameplay, it’s almost sad that expectation and reality had to meet this way.

To be a kid again

The demo opens by greeting you with cheery string plucks and upbeat tunes in the menu screen, a callback to all of the vibrant, cheery gameplay showcased thus far. The first thing you’re able to do is choose one of four boys or girls, each with diverse skin tones. From this point, the opening cinematic rolls, yet again sparking those feelings of wonderment as to what happens after the sequence finishes. I at least had a sense of optimism before embarking on the journey ahead. A journey that would have me recovering pieces of a child’s lost heart. 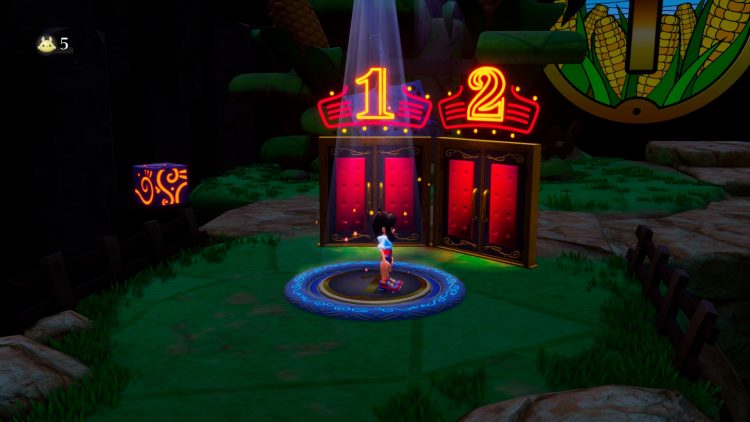 From there, the demo whisks you off to the first world and its already peculiar decorative choices. The first sign that things are going to get a little weird is the giant emblem for the first level that bears an outline of an ear of corn. I remember thinking, “Okay, odd, but I’m here for it!” It’s easy to assume that the area you first land in will grow in size, acting as a hub world for all other stages to be unlocked and revisited for all of the collectibles that will shortly be introduced. Stepping on the first pad opens up two selectable doors and enters you into the first chapter and act, The Man Who Rages Against the Storm. 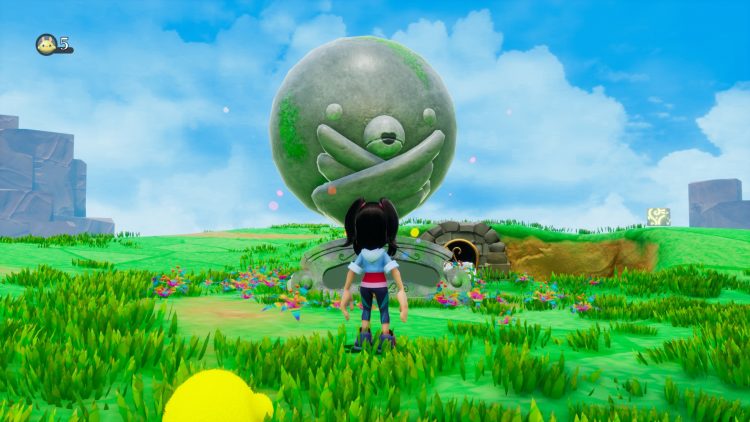 Right off the bat, I found that the controls don’t require a degree in rocket math to navigate. In fact, there is only a single button press that you’ll need to know to start. It allows you to jump and platform. From there, I started to get a feel for the game’s physics and general control scheme. Right away, I started collecting the colored crystals littered throughout the map which are called “drops.” 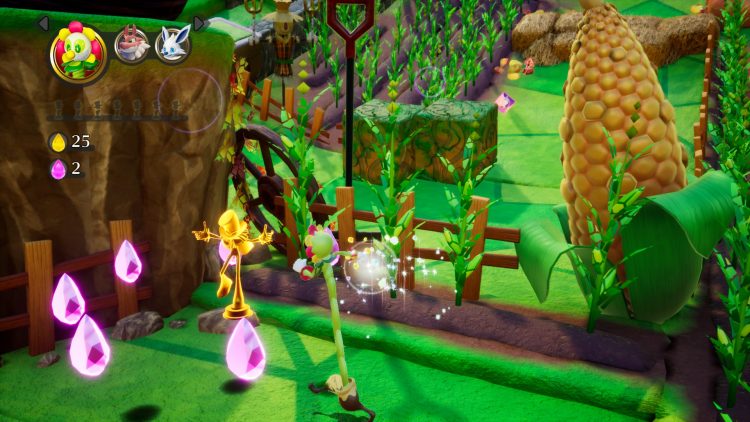 The drops are then used to feed Tims, which are much like the Chao from Sonic Adventure, initially starting as colorful eggs that will hatch the fluffy Tims. You can even discover some in-level and they will show up back at the hub once it’s completed. Drops come in a few colors: pink, red, and yellow. Back in the hub world, you can use these to feed your Tims. These are just a few of the items that you’ll be hunting for throughout each level. Trophies are another, which will show your progress when you hit the pause button and view your game menu along with available costume changes. 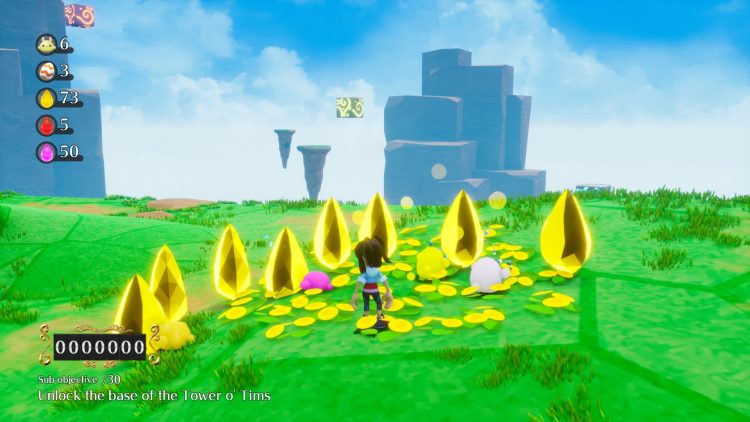 Is this considered a drip feed?

The Balan Wonderworld demo introduces some of the game’s 80+ costumes. These are akin to those seen in the Super Mario 3D titles. Each suit transforms your character and offers different abilities. You can don the Jumping Jack bunny suit to jump higher and run on air. The Tornado Wolf has a spinning jump attack that can break crumbling rock, allowing you to explore areas of the map that would be otherwise blocked. 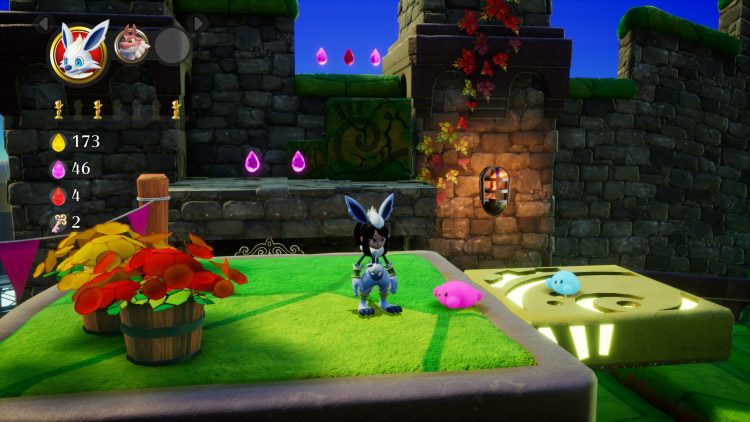 Costumes can be hot-swapped, and you are able to change them out when presented with a costume tent. You can equip a total of three in the demo, but it is unclear if that will be an upgraded feature in the full release. Each ability has importance, as it can be used to solve minor puzzles to collect more drops and Balan trophies. 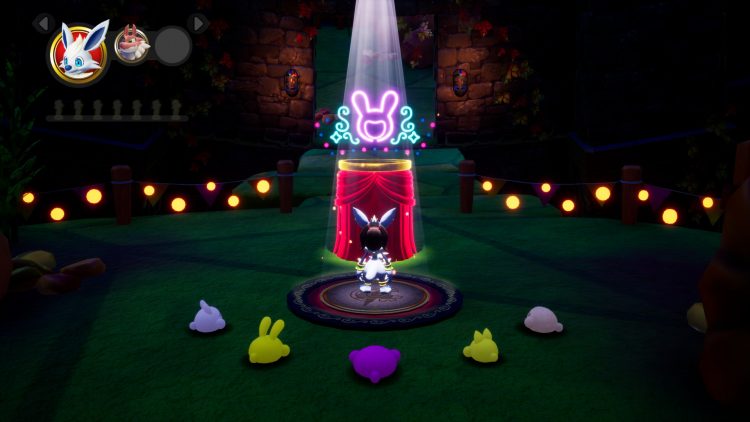 Grabbing Balan’s golden top hat will open up a Balan’s Bout bonus stage, introducing you to a quicktime-esque sequence. I found it fairly easy to mash buttons or time my pushes to obtain a perfect score during the QTE. Once this bonus level is completed, you’ll receive a score and unlock a trophy. The way it was teed up, I expected something far more engaging and sadly, more fun. Instead, the simple button presses and poses left me feeling more like I wasted my time rather than accomplish anything, even if a Balan trophy and a good grade were my rewards. 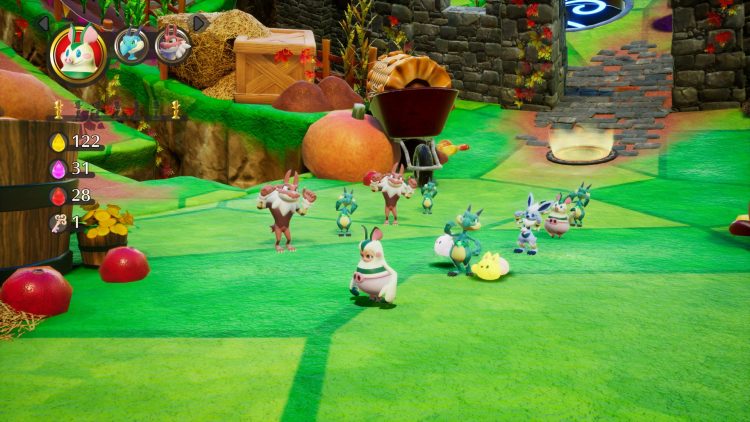 Costumes also serve another purpose, as they take the place of a power bar or extra lives. Getting hit by an enemy will remove your costume and task you with picking it up again from a costume hut or powerup icon. Overall, there was really nothing that generated excitement for me, regardless of whether I was a flying pig or a spinning wolf. It was hard to feel more considering the empty world and sparse enemies throughout it. Even the ground obstacles were easily avoided, not really showcasing any features to be expected upon release. All in all, this felt more like a tech demo rather than a showcase of Balan Wonderworld’s best attributes.

A few tricks up its sleeve

Despite the heavy critique of the demo experience, there were a few things that I thought were portrayed well in its brevity. The passthrough mirror has a pretty neat animation that I can’t say I’ve seen before. Generally, if something like this is found in a 3D action platformer, your character will dissolve and then magically reappear on the other side of a blocked path or obstacle. 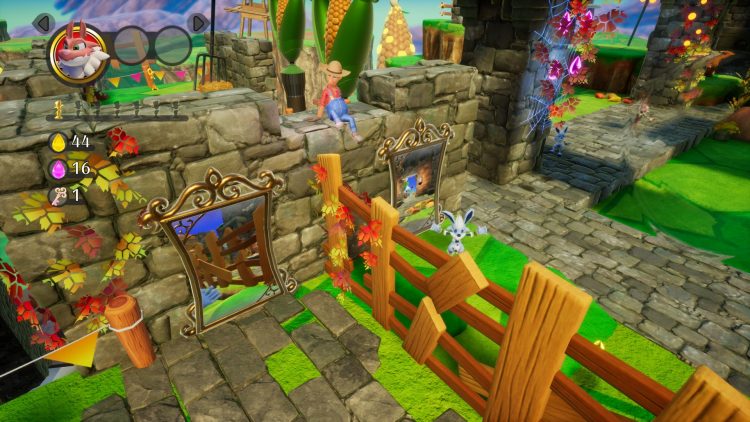 Instead of this overly-used mechanic often found in platformer puzzlers, you walk directly through the mirror in Balan Wonderland. Your character’s perspective changes almost immediately, which makes the world transition feel genuine. It felt as if I walked through a magic mirror, which makes this small feature worth the mention. 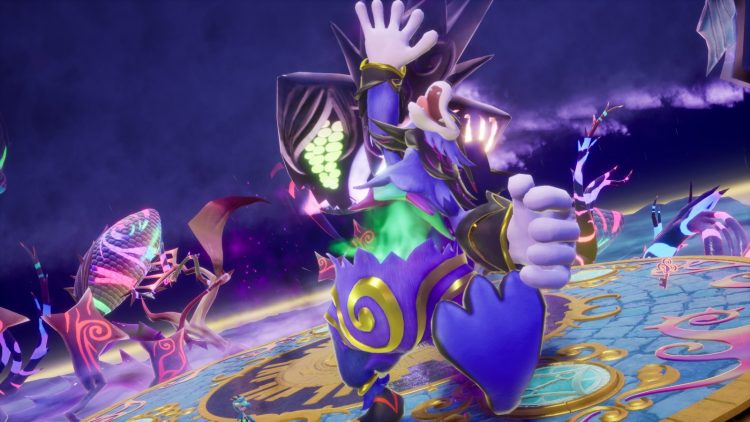 Another part of the demo that stood out was the boss-type enemies. They were by far the most polished animations and designs, aside from the main character. Despite their fleshed-out feel in appearance, they were easily defeated without so much as an ounce of panic. I was again greeted with a feeling that something epic was going to happen and left munching on a nothing burger.

Balan Wonder-what was that

I hoped that when I walked away from the Balan Wonderworld demo, I would of at least had the pleasure of experiencing all of the platforming and odd fun the trailers showcased for months. Instead, I’m left still trying to decipher what exactly I just played. The moment I realized this was a problem was when I verbally tried to explain my experience. “You see, there was this world with giant ears of corn. Then, a boss battle started when a farmer was poisoned and turned into a monster. When I beat the boss, the farmer saw one stalk of corn left from his trampled farm which was followed by a dance-off.”

Most of the demo felt disjointed and didn’t really strive to make any sense. That might have been fine if there was something of substance to be extracted from the gameplay itself. However, the game feels like more of an idea for a project in development that’s in need of a lot of work in its future. It surely didn’t feel like a game that’s about to release in a few months, which Balan Wonderworld is expected to do on March 26. 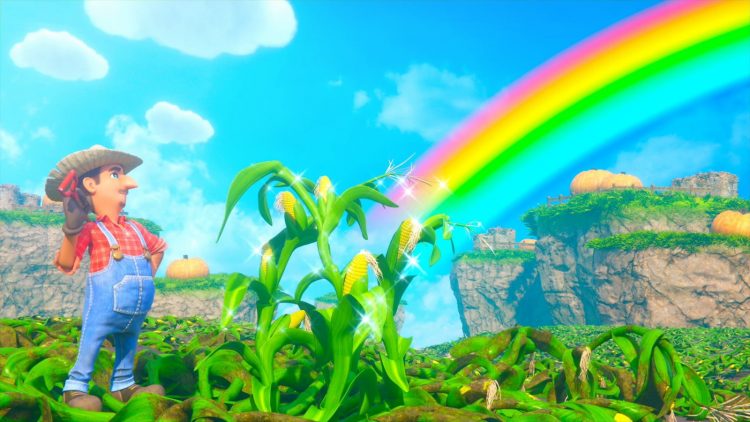 I’m still hopeful that this is only a sliver of pre-alpha gameplay that has since been heavily modified – emphasis on heavily. Either way, I can’t say that I share the same excitement that I once had. It instead feels more like when I found out that Santa wasn’t real, a disappointing reality that I sadly had to face where the magic in my life was extinguished in mere minutes.

Balan Wonderworld is set to launch on March 26, 2021. The demo can currently be downloaded from its Steam page.