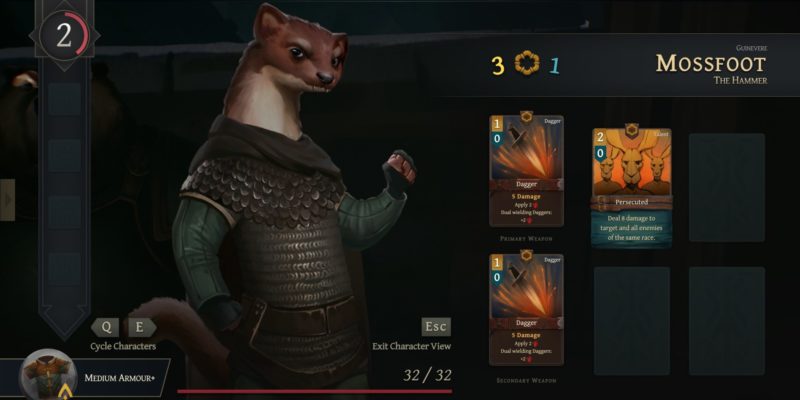 A hare, a bear, and a bear enter a tavern. All of them are secretly infiltrating the city as part of a plot to ruin the new ruling family. And if you add a few “well, it’s like Slay the Spire, but…” to that joke, you’ll get something good. You’ll get Banners of Ruin.

You are the loyalists of House Blackfoot. Said dynasty has recently suffered a major setback at the hands of House Ender. Now, Blackfoot agents are infiltrating the city of Dawn’s Point. Their goal—the death of the guard captain the Enders stationed there. The agents face death at every corner, but house Blackfoot never relents and never forgets. If you fall, there will be others.

Said “others” will probably be a bear and a weasel, since this is a world of anthropomorphic animals inhabiting a dark medieval milieu. 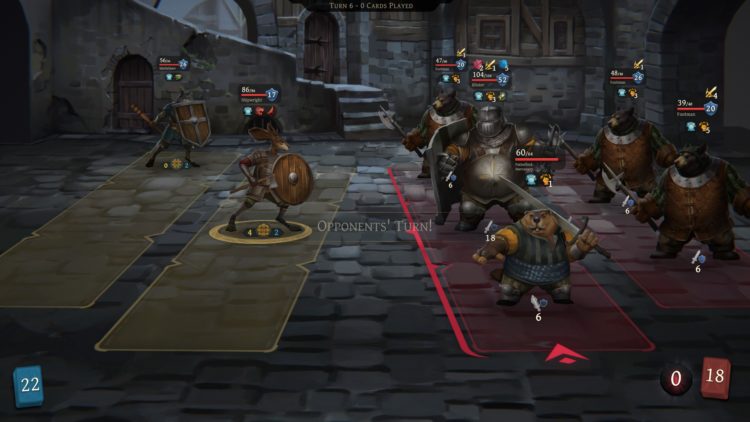 Some battles start and end better than others. This one won’t.

Every run of Banners of Ruin begins with a team of two animals. Your agents start out humble, a weapon in hand, with no special abilities to speak off. As you fight and sneak your way through the streets of Dawn’s Point, you’ll find better gear, new skill cards, accrue levels, increase your stats and talents, find new team members, and die. This is how these card-PG-likes (trademarking that term) roll, after all.

The streets will run red with blood

Let’s start the deeper delve into the mechanics of Banners of Ruin by looking at the streets mechanic. Much like Slay the Spire, a run is comprised of three levels called “streets,” separated into three lanes, but (see what I meant in the first paragraph?) there is no map.

Instead, each lane is a card deck. Each card is an encounter. Once you choose one of three, the encounter is resolved and the other cards are removed (unless they have a timer that’s lengthier than 1).

What kind of encounters do you get in Banners of Ruin? Oh, there’s a whole lot of the things, and most of them aren’t combat oriented. Some just give you benefits without a hook, like healing your team, giving you XP, new cards, or gear. Others present you with a choice, usually a moral one, of either acting and putting yourself in an unfortunate situation (like fighting) or taking the easy way out. Some cards spawn an effect if you don’t choose them, like a partying guards card turning into drunk guards card, letting you pickpocket them for easy cash. There are also blockage cards that you can’t choose, forcing you to take other lanes. 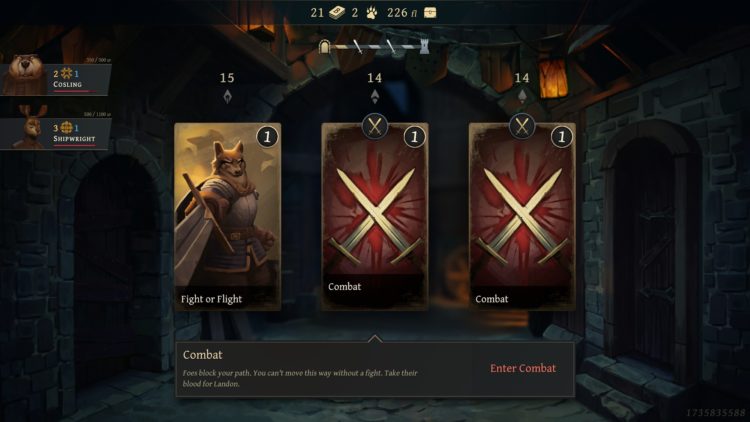 Sometimes, you can only choose between a fight, a fight, or a terrible fight.

So unlike in Slay the Spire, you never really know what’s ahead, but you almost always have three choices of what to do. There are like four unavoidable combats per street, one of them always happening once you reach the end. On the other hand, reaching the end of the streets gives you major benefits, allowing you to either improve your equipment, hire more crew, or fully heal the team. Neither of the choices are free, but they’re powerful. This is always followed by a fight, which is then followed by a windfall allowing you to choose between experience, money, or healing.

Those cats were fast as lighting (note: cats do not appear in Banners of Ruin)

But let’s talk about the fighting! In Banners of Ruin, the fights will, at most, be 6 vs. 6. Although most of the time, it’s 2 vs. more. Each side of the battlefield is separated into two ranks of three spots. For the player controlled animal infiltrators, ranks mostly matter because of some of the skill cards have different effects when played by a soldier in front or back rank.

The enemy, however, only acts by alternating between ranks. Sure, if one of the ranks is empty, only the one with soldiers will act, which makes shifting enemies between ranks a good tactic. You always know what the enemy will do next, so kicking some boss bear out of the active rank gives you some breathing space. There’s also stuff tied to character position within the rank, but the most important one is this: if the enemy character is targeting a specific dude in your rank, shifting them into another position will make the enemy miss. 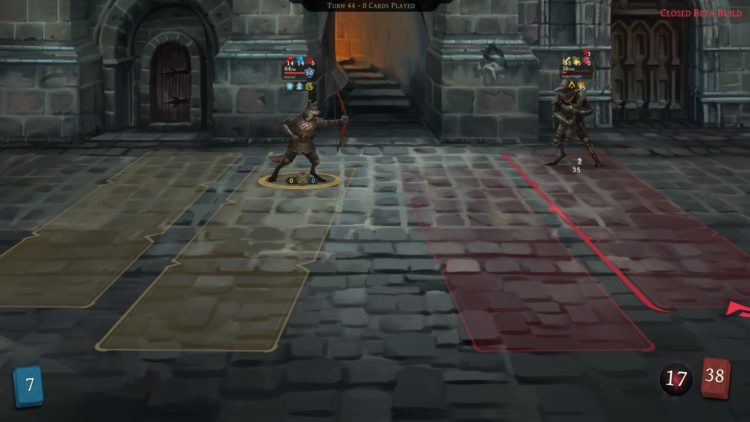 It took me a lot of nonsense, but I won this one!

Granted, it doesn’t help if you move the character into the same position but in another rank (the two equal positions in two ranks are called a “lane”), since the attack will then hit that spot instead. Congrats, you probably wasted a card.

However, juggling characters is but one of the expert builds you can get into. On the more mundane side of things, your characters in Banners of Ruin have a stamina and willpower pools. The first one resets every round, the later doesn’t. Stamina is spent to use cards, which are your attacks, abilities, and so on. Some of the cards can only be used by specific character, as they’re keyed to their weapons and talents gained leveling up. However, the majority of cards are neutral, and can be used by anyone who has the stamina (or, in case of more powerful effects, willpower as well) to use them.

For example, the “Greatsword” card only becomes available when you have a character armed with a greatsword (duh). It does 12 damage (quite a bit) to every character in the rank. However, the greatsword is a two-handed weapon, so the character can’t equip a shield or another weapon. “Strike” is a generic attack card, which deals 5 damage. Not great—most weapons deal more—but it can be used with any character, and you have three of the things in your deck. “Momentum” is a card that doesn’t cost anything to activate except for discarding one other card (so it’s essentially free if it’s the last card you’re playing), but it gives the character using it a 3 damage “Fury” boost next time you attack.

By the way, that 3 damage boost? It’s not particularly great when used with a “Strike” (8 damage, woo), but it can get really deadly when used with “Flurry” or any other multiple attack card. And you know what’s even better? Using it with a character that, say, inflicts Bleeding (hurts health while ignoring armor) condition with every strike on an enemy that has a Vulnerable (takes 25% more damage) on.

Seriously, high level (street 2 and up) play in Banners of Ruin depends on you having some underhanded tricks in your repertoire. Simple attack skills just don’t cut it when you’re doing a 13 damage whack to an enemy with 100 armor (the other HP). You need some tricks up your sleeve, like Bleeding, Fury, juggling dudes between ranks and spots, inflicting Poison (unlike Bleed, it does damage to armor before health, but it ticks up not down every turn), and so on. There’s also synergies and combos to pull, like giving other characters Fury, or stripping enemy armor in preparation for attacks that do special effects on unarmored targets.

Let me tell you, this gets pretty wild. Yet at the same time, Banners of Ruin is one of those games where you can be pretty okay with not grabbing every card you can for your deck. After all, it makes the deck more predictable and your good, useful cards will cycle more often. The most serious stuff comes from leveling up and equipment, anyway. 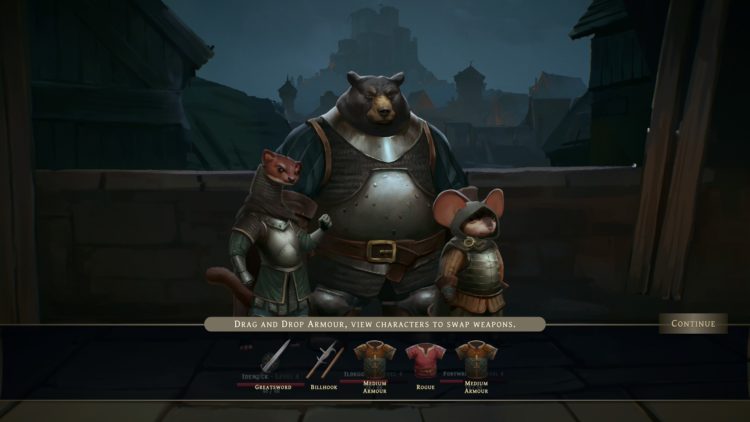 The lads don’t start the game looking this good!

In regards to leveling up, once your weasel gets enough XP (XP gains are divided by party members, so a smaller squad will level faster), they can increase their stamina or will by a point. But most importantly, depending on the level, they’ll get to choose talents and traits. Talents are the character specific super skill cards, like dealing 8 damage to every enemy of the same race (species) or dealing a lot more damage to an enemy who’s left alone in their rank.

Traits can get pretty wild as well, as they’re always on. Some of them are better than others. For example, giving 1 Poison to a random enemy when your character uses a card? Yes, please. Getting a damage boost when your ally dies? Trash, as that is something you want to avoid in the first place. And as you complete runs (by winning or dying), you gain unlock tokens, which unlock new traits and new cards for other runs. That’s how you characters may get traits like “Unholy,” which convert any Bleed conditions into health, which is frankly insane.

My life for House Blackfoot, even if I don’t know who they are

You may be getting the impression that I like Banners of Ruin. You are right. Not only does it play well, it’s also written well, just like Monster Train before it. There’s little explicit lore in the game, but there are enough bits and pieces to give an evocative sense of this world.

And the art helps! Sure, you may be taking humanoid mice and beavers into battle, but they’re decked out in serious medieval gear. They even fidget a little as character portraits in the street menu. Meanwhile, the enemies look more fierce as they increase in danger, going from hare and mice militia that look so pathetic you don’t want to fight them, to battling elite Ender wolves decked in the best shining armor. If there’s one thing where the art fails, it’s the wolf knights with visored helmets. Making the hounskull visor form-fitting to the boopable snoot is a not the best design decision. 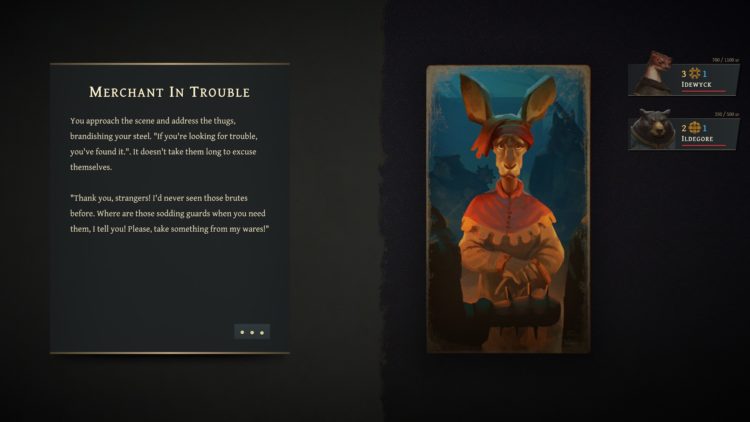 The art is generally great, though the hares tend to look a bit donkey-like.

The sound works well, too. Sure, the Banners of Ruin soundtrack isn’t exactly winning prizes or becoming an earworm like the few tracks that Dominions 5 has, but it’s pleasant enough. And while your soldiers don’t have unit barks, the attacks and effects on the battlefield are easy to identify by audio alone. You can’t really innovate much in the area of metal-slicing-flesh, but hey, it’s still nice to hear it every time your sword bites into an unarmored enemy.

All in all, I’m pretty hype for the full release of Banners of Ruin. The game slaps already, and since it’s only entering Early Access today, I can’t but wonder what improvements the devs have in mind. Will we learn more about Houses Blackfoot and Ender? Will they improve the art for armored wolves and maybe bears holding swords? Only time will tell, and I hope it says “yes.”