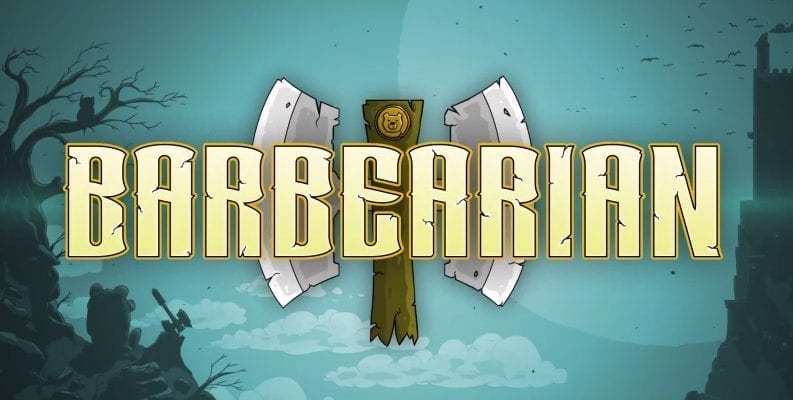 Some of my most favorite video games don’t fit into any one specific genre. I have fond memories of arcade shooters like Total Carnage and even strategy games like Lemmings. Barbearian takes tidbits from a few genres, including the games mentioned, to create an isometric hack’n’slash with a Warriors feel. There are also light RTS and bullet hell elements to round out this hand-drawn adventure.

Whenever I play a new game, the first thing I usually take note of is its music. Afterall, most modern games are meant to be played for more than just a few hours. There’s no doubt that the soundtrack in a game can detract from your consumption of it, sometimes even hurting your overall experience. I will say that Barbearian’s soundtrack is something I could find myself listening to even outside of the game.

Although tracks repeat on an endless loop during a level, they never become annoying or obnoxious. Some bear a resemblance to many of the chiptunes type artists that I’ve grown to enjoy, which is probably one of the reasons I’ve taken a liking to it. Other smooth dance tracks deliver the pump needed for your next battle. What’s even more interesting is that a single-person, veteran Kimmo Lahtinen developed Barbearian. However, the music was made by Tommy Lahtinen aka Tommy Baynen. I’m unsure of the relation, but he has created a catchy, energetic, and enjoyable soundtrack. 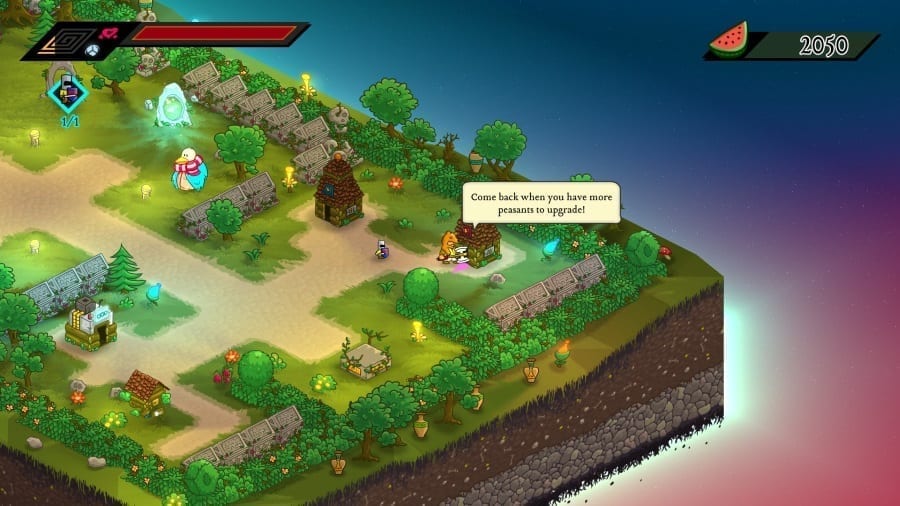 It’s crazy to look back on your progress from going from one peasant to an army of 60.

When you first jump in, you might find yourself questioning the game’s difficulty. It’s more than possible to defeat early bosses in a single attempt. However, the game gets tough quickly. The difficulty doesn’t just come in the form of harder to kill enemies. Instead, floods — and I mean floods — of foes can pour onto the screen at any moment. Most of your time is spent creating on-the-fly strategies for enemy attack patterns. Your approach is also dependant on the powerups you are carrying.

When the opportunity peasants itself

The focus in Barbearian isn’t necessarily upgrading your character. Each level has discrete thirds. There is a single peasant to save in each of those levels that can join your merry crew. Each new peasant starts out in a basic role. However, the food and jewels you collect during your playthrough are redeemable as upgrades for both yourself and your new peasant squad. You can upgrade your army into a mix of archers and knights. Doing so helps in creating a strategy for close-quarters combat (knights) or having something a little more ranged (archers). As battles go on, you will lose any number of fighters you had. By building up your respawn bar, you can bring back more and more lost soldiers during battle. It’s crucial to do his as much as possible after the initial introduction to the game.

There are numerous ways to grind for new gear. You can reenter levels for additional loot, or even set your sights on the weapon mastery levels. But, I did find that there wasn’t ever a moment where I felt I was sitting on a pile of funds. Even things using a continue can put a dent in your wallet. It’s a constant game of buying the necessary powerups, upgrades and staying afloat with your continually growing army. 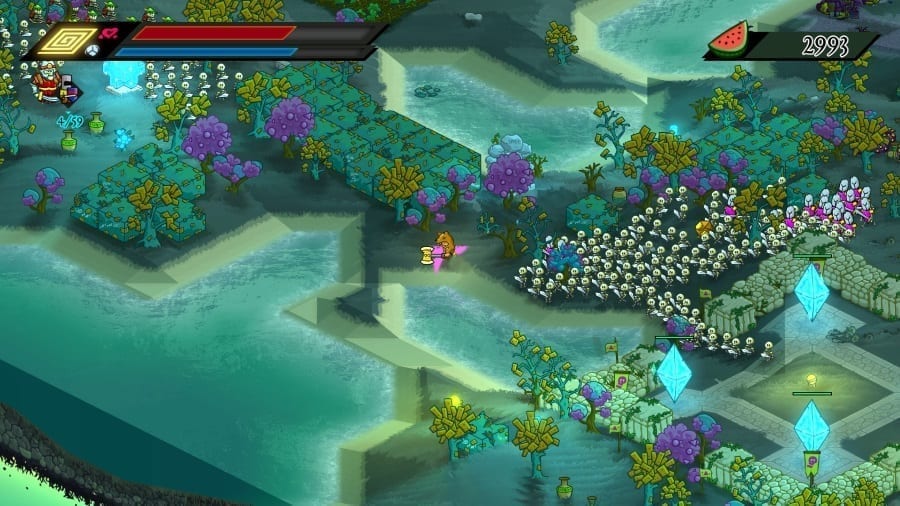 Yes, yes. Follow me to your doom. That is, once I get enough power to respawn my minions. Then, d-o-o-m!

Aside from your ax attack and your peasant army, there are a number of unlockable weapons throughout the game. Items like the machine gun and flamethrower are great for crowd control. It was surprising also to see small design elements, like grass that catches fire when lathered with flames. You can then use these flames to your advantage or demise if you’re not careful. If you’re in a pinch, grabbing one of the character speed boosts, shield, or even a ghastly attack drone can alleviate any worries of an oncoming mob. The use of each of these becomes more important as the game progresses, having you call upon all of your wits to make it out alive.

Although the system for your army and peasant spawning works reasonably well, I did find it frustrating at times. When going into larger battles where you’re more likely to die, you might not get the power needed to spawn more help. There was one point where I had killed a line full of bugs and knights that were chasing me around obstacles on the map. I killed around 120 enemies without a reward and couldn’t respawn a single helper. This might not seem like much of a problem, but, the majority of your time spent isn’t necessarily killing enemies by your own hand. Instead, you let your lemmings do most of the work. Tough hordes of enemies are a bit more manageable when you’ve got an army of 50 to 60 minions behind you. 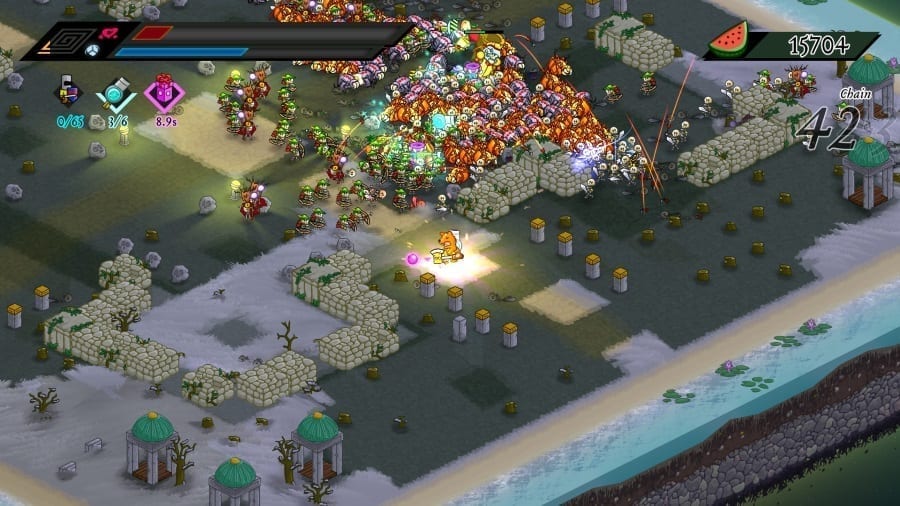 Should have zigged instead of zagged-zigged-zagged

After completing certain levels, a boss battle will appear. In most games, the overworld may serve as a sequential, numbered area that you can get upgrades or simply head to a new level. Barbearian instead introduces a rather convoluted way in which to navigate level selection and the weapon mastery areas. It often felt confusing and became more of a nuisance, if anything. Who wants to search for what’s next after you’ve just sweated through a 20 minutes boss battle? A straightforward level layout would have better suited the game considering its challenging gameplay.

The one thing that I couldn’t bring myself to enjoy during my playthrough was the game’s visual style. My first impression was that Bardbearian was created for mobile and PC platforms. The art evokes a style often seen in those games. However, I feel that it shouldn’t be held against it simply because that’s my personal preference. Although the visuals showcase some vivid colors and can pull off something like having hundreds of enemies on screen, I couldn’t shake the feeling that the game truly felt comfortable with itself.

Barbearian packs surprising depth. For myself, the visual style of the game never really began to settle on its own. But, one thing that did lock me into the experience was the hack’n’slash and Warriors elements, mixed with a killer soundtrack and challenging gameplay.

Although the overworld may seem confusingly put together, the satisfaction of completing each level and watching your army grow makes it all worth it. If you’re up for the challenge, then Barbearian has a chaotic, yet rewarding adventure ahead of you.

Barbearian is a hack'n'slash with a lot of character. While the visual style didn't really resonate with me, it's easy to look past that while you're neck deep in enemies and bouncing along to the amazing soundtrack the game has to offer.

Metro Exodus pre-order available now, sadly, the Aurora Edition is limited to a few countries as of now

Travis Scott with the assist on the NBA 2K19 soundtrack