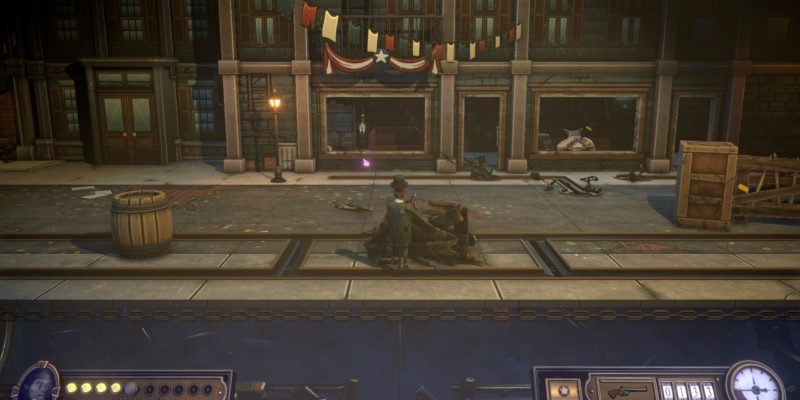 Releasing out of Early Access can be tricky. Bartlow’s Dread Machine, a unique twin-stick shooter with a surprising amount of creativity and variety, has been putting out new sections of the game at quick intervals since its EA debut just two months ago. It finally has all of its main content in place and, while it’s undoubtedly a good game, it still needs some serious balance and options changes. It’s certainly worth playing and can be very enjoyable a lot of the time, but some nagging issues hold it back from being all it can be.

Bartlow’s Dread Machine puts you in the role of a Secret Service agent of your choice. Your task is to rescue Teddy Roosevelt from the clutches of a group of dastardly anarcho-satanists. If you can’t tell, tongue is firmly-placed in cheek in this game. Everything is meant to look like a mechanical gizmo. All of the characters are animatronic robots, and the sets are all placed in like an actual old-timey machine is putting them together. The aesthetic is excellent.

The dialogue is also well-done for what it is, and there’s more story here than you’d probably expect from a game of this sort. Your character even has a mysterious past that ties into everything. Speaking of which, Bartlow’s Dread Machine begins with you selecting from several characters, of which there are more to unlock by finding portraits in-game. Then you select your difficulty and are then thrown into the first act, of which there are six. Each act has at least three levels, while some have four. For a twin-stick shooter, this is a fairly lengthy title, as a first run can easily take players upward of six hours. 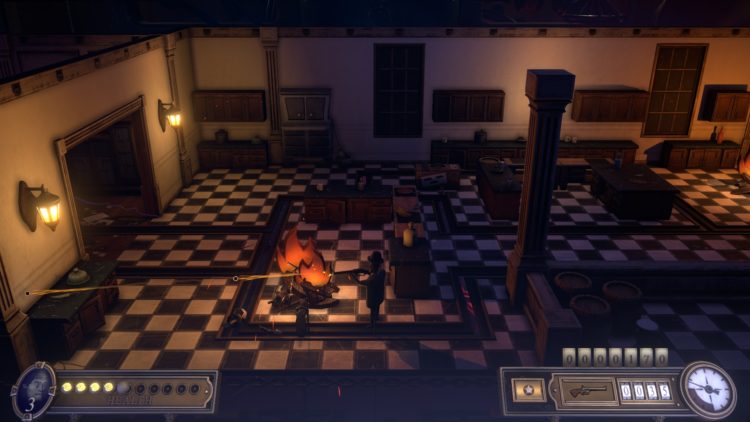 Bartlow’s Dread Machine can be played with either a controller or mouse and keyboard, but the latter is, unsurprisingly, far more preferable. Using a mouse gives a cursor which makes actually hitting things that much easier. That being said, there’s a fair amount of auto-aim at play, as the perspective can make accuracy rather difficult. Similarly, it can be hard to gauge how close enemy fire is to you as well, making it tough to actually dodge things. You control your chosen character on metal tracks in the boards the levels take place on. This is also much better when using a keyboard than an analog stick, as the latter leads to instances of troubles when trying to round a corner.

It’s honestly a very novel way of moving around. Sure, you don’t have free 3D control, but your enemies are similarly limited, which allows you to use the tracks as choke points. And you’ll need them, because sometimes Bartlow’s Dread Machine throws way too many enemies at you at once. But the shooting is fun. Your character can carry three weapons: a rifle, a secondary weapon, and a pistol with 999 rounds to be used as a last resort. Your character’s health is shown via light bulbs, and these can be increased with equippables and upgrades from beating bosses. There are also spots to recover health and ammunition in the levels.

Enemies in Bartlow’s Dread Machine come in melee and ranged varieties, oftentimes simultaneously. The default rifle shoots very quickly, and is a really good choice for most situations. Different secondary weapons can be purchased from the shop that displays before starting each level. These are the sorts of weapons you’d expect, with machine guns, shotguns, dual pistols, and the like. But the amount of ammo you can carry for these is low. You can also purchase hats, pants, coats, and elixirs. The first three generally come with bonuses, such as increasing your health, damage, or amount of money you get from bags. Almost every defeated enemy drops a bag of cash that disappears after a little while. But a lot of items are extremely expensive, meaning that you’ll either need to grind or play through the game multiple times to afford them. 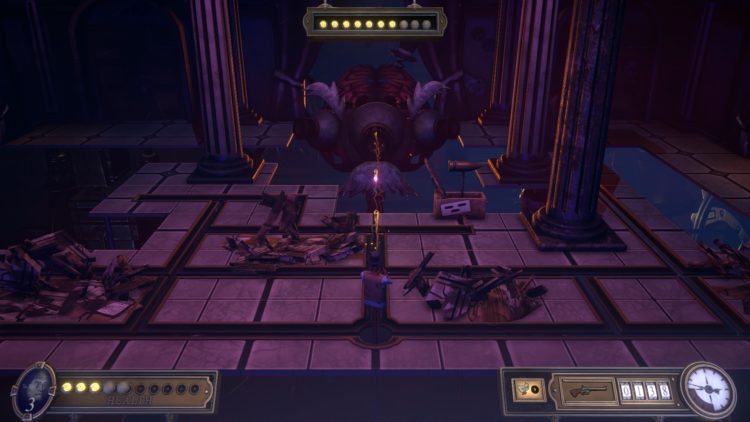 One of the things holding Bartlow’s Dread Machine back is the choice to have a lives system. You get three tries for each level, and have to start over from the beginning if you die — it’s pretty standard stuff. However, it’s just not necessary here. A lot of the sections in the game can be flat-out cheap, and the levels themselves are far too uneven. The first two acts are mostly easy, save for some truly obnoxious boss battles where certain attacks do way too much damage, with one-hit kills being pervasive in the second. The third act has a huge difficulty spike with some sections that are so hard that I could barely make it to the next checkpoint without memorization. Oddly, the third act’s boss was a pushover that I beat on my first try.

A lot of sections really just have the odds stacked against you in a way that doesn’t feel right. It’s not uncommon to get stuck in a corner while getting swarmed by melee enemies. And, when they’re right up next to you, they can be hard to hit due to the way aiming works. This can generally be mitigated simply by learning when these waves are expected and where they’re coming from, but it can also mean having to start a tedious level over again from the beginning just to get another shot. These issues are compounded by how some of the health and ammo refills are placed. Certain levels have them spread out appropriately. Others, however, will have long stretches without either, even if you’ve gone through a particularly demanding section that leaves your health and ammo drained.

This all comes to a head in a particularly awful level in Bartlow’s Dread Machine’s fifth act. It’s a slow, boring walk through a temple while dodging traps before making it to an enemy that can summon waves of other enemies. Putting that enemy down is an annoying slog. It’s worsened by how the area is so dimly-lit that even seeing the enemy hordes is difficult. Afterward, the game gives you no health or ammo refills and then requires you to fight two more summoners with even larger waves. I also had the game crash on me twice during this level, which means you have to start over from the beginning without keeping any of the cash you earned. The game is fairly prone to crashes and freezes in general. 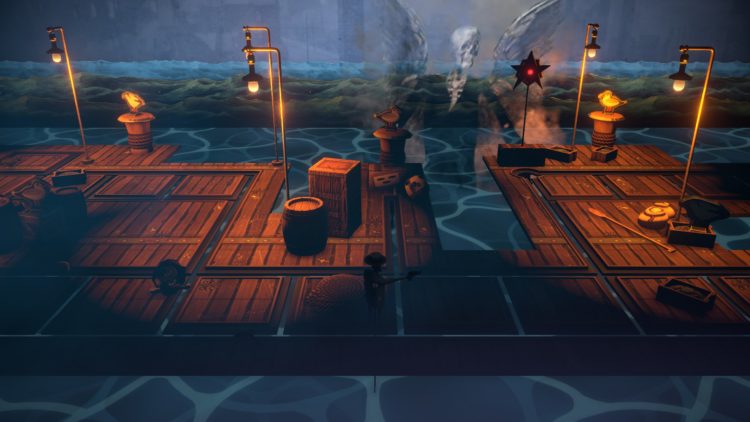 The performance in Bartlow’s Dread Machine is also surprisingly poor, as the game often dropped to 30fps for me, even though I’m using a mid-range card and processor. You also can’t change your character or the difficulty without starting a new game, which really needs to be addressed. Overall, though, there’s a lot to enjoy about the game. It just isn’t ready to come out of Early Access yet. With more fine-tuning for many aspects of the levels and general balance, plus better optimization, it’ll be easy to recommend. But, as it is now, it’s very uneven and not polished enough for it to fulfill its potential. 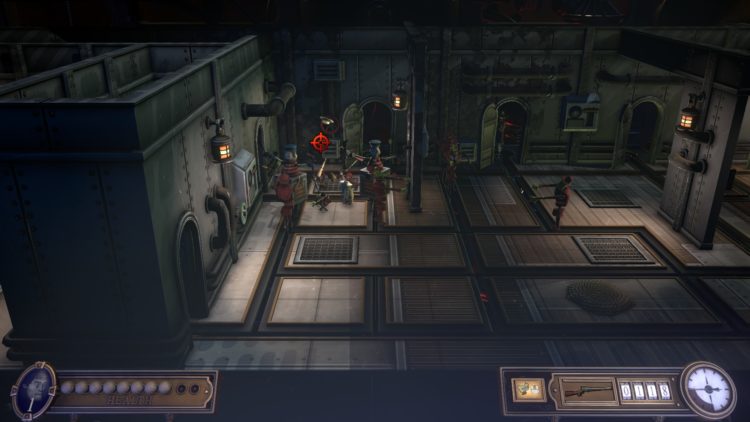