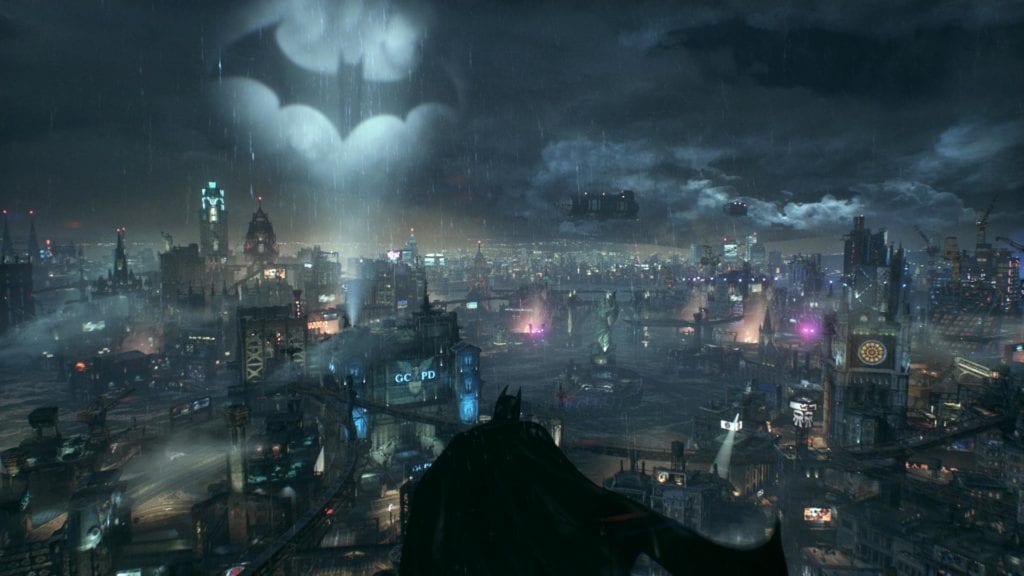 Since reports flooded in about Batman: Arkham Knight’s launch disaster I’ve been avoiding firing it up. Tim, on the other hand, persevered and finished the game ready for our review. That final verdict is currently on hold until the game is actually available to buy on PC again.

For those players stuck with a semi-functioning Batman: Arkham Knight in the mean time, there may be some rays of hope (no, not a new patch, we’re still waiting on word about that.) Last week, site reader Zac pointed us in the direction of an ini file tweak tool, which makes it a little easier to try and get the game working by turning off various configuration options.

There’s a lengthy thread on the Steam forums which also includes a link to the tool for easy editing of the game’s files. Be sure to pay attention to sections like “additional required files.”

I couldn’t resist the temptation, and against all better judgement, I pressed the launch button in my Steam client. Was it a bad move?

Bat-rain in full flow, there.

I thought it might be fun to see what the tool could do to get the game running smoothly on my PC. The system in question includes an i7 CPU, GTX 980, and 16Gb of RAM – which shouldn’t really have a problem running Batman: Arkham Knight. If, that is, the game were actually optimised and coded properly.

Without messing with any of the tweak settings, and enabling all the cool Nvidia effects such as rain and floaty paper it ran like a complete dog. Did it look amazing? In fairness, yes it did. This only makes the current situation with the game even more frustrating if you’re stuck with owning it (or are just toughing it out until it’s fixed rather than trying for a Steam refund.)

I decided to persevere. The early part of the game was eventually running okay, but then the bat idiot decided he needed to call in the Batmobile. That was it. The PC couldn’t handle it. I was faced with massive lock-ups resulting in a whopping 0 FPS. I thought the HD in the PC was going to explode. I’d never heard it get so angry. Back to the drawing board, and time to fiddle with the ini tool.

Loading up the tool, I decided to take a look over Zac’s email in which he offered up a few suggestions and was even kind enough to send over a shot of his tool settings as a bit of a guide. Only problem was, his settings were for an AMD card. Worth a shot though.

He suggested the following to get started:

Set your resolution, match your desktop refresh rate, fullscreen, smoothed range, then under texture streaming start with balanced (click). Fade in rates use default to start off. If you’re playing at 1080p then set 16x AF, if playing at 1440p or higher use 4x. Texture groups click OPTIMIZE. You must click this every time you make any time you use this tool.

After launching Batman: Arkham Knight with these settings, it appeared to work fairly well; but there was still the issue of all the Nvidia goodies like smoke effects. Turning on Interactive Page Debris and Enhanced Rain Effects was fine, with seemingly no performance difference on this machine whether they were turned on or off. Having them on makes the game look better, so I stuck with that. You can’t beat a soggy-looking Batman.

Smoke is a beast though. During my initial benchmarking tests the FPS crawled (or just died) when in the Batmobile section, but I decided to turn it back on to see how things fared post ini edits. I was at an early section of the game where you have to winch the Batmobile around and get those tyres spinning which, naturally, causes a lot of smoke. I was expecting the PC to explode again, but weirdly enough the game was handling it.

With PCs all having different specs, the results from the game’s own performance test option are going to be very different. That said, if you have a solid play about with the ini editing tool’s settings the game does start to become playable. While not everything can be cranked up to 11, I thought I’d finally managed to find a sweet spot where the game actually ran pretty well. Sadly, though, it was only effective in certain areas of the city.

Running the settings below through the in-game benchmarking option gave a low of 4 FPS (ouch!) and an average of around 35. It just didn’t prove stable enough to play for any prolonged period of time.

My own efforts – still not tweaky enough for Batman’s liking, apparently.

Time to turn off the pesky smoke and light shafts, then.

With that done, the same test came out with a low 16 of and an average of 56. Holy (mostly) playable game Batman! Not perfect by any means, but in a live setting (ie; the actual game,) things ran a whole lot better than with vanilla settings; albeit without the smoke and light shaft effects. But I can live with that.

Were Warner Bros. right to pull the game? Absolutely. It’s taken some considerable time to make this semi-playable with a third party tool, and even then the PC gamer in me is nagging to keep messing with the settings to try to squeeze out a little more efficiency. I’ve resisted for the time being though, and will probably wait for more official patches.

If you were one of the unfortunate few who purchased the game when it launched and are fed up waiting for a fix then grab the tool from the Steam forums and start playing about with it. Read the notes too because they explain what’s going on with texture data, VRAM limits, and why the game is struggling to cope. It’s a bit technical but well worth reading to find out why those who worked on the PC version took the last minute shortcut of capping the game at 30 FPS.

Just be prepared to spend some time with it to find your own sweet spot and hopefully your HD won’t explode with all the disc access (the tool itself notes that SSDs will get the best results.)

Thanks to Zac for writing in, and for his notes on the tool.

If there is anything you want us to check out, you can always drop us an email at [email protected]

The Flock will eventually stop being playable