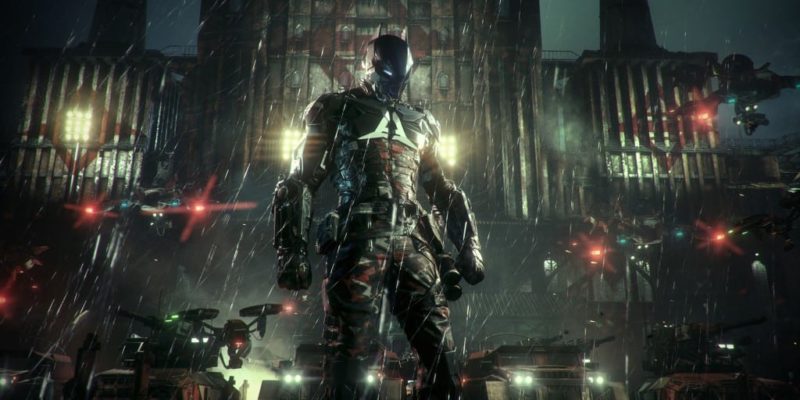 Seven minutes of Batman: Arkham Knight gameplay have been released, as the Dark Knight goes to war.

Unlike a lot of trailers, which barely merit a sentence, this actually deserves a little bit of examining. Plot-wise, it starts off with Batman swooping around the city, rescuing Poison Ivy from Scarecrow’s thugs. This is followed by a quick ride around the city in the Batmobile and a battle against some tanks.

The big, obvious change is how eye-searingly gorgeous it looks, and it really does look lovely. However it works, it simply doesn’t look like the same aging Batman: Arkham engine rejigged with higher-resolution textures and better lighting effects. And this video has the PlayStation 4 version on display, so I’d expect the PC version to look at least a little bit lovelier.

In terms of more important stuff, the “beating guys up” (or Free-Flow Combat or whatever you want to call it, if you’re a pedant) mode looks pretty similar. It looks slightly less clunky and less occasionally wonky in terms of clipping and animations, but it’s really hard to judge that based on a video because for all we know this was recorded 17 times to make sure everything looked fine. Either way, this largely looks the same.

There’s also not quite enough Batmobile driving to really judge how that handles, but it looks like it’s a big, weighty vehicle with some serious forward thrust. More interesting is when it switches into combat mode to battle against the tanks, and gains the ability to slide in 360 degrees. The tank combat has big holographic markers highlighting where enemy shots are going to hit, requiring you to move out of the way before they fire. A unique little touch, and I like; it beats sliding around firing slowly or ducking in and out of cover to avoid shots.

Anyway! You can take a look at it for yourself below, and if you’ve any interest in Batman: Arkham Knight, you probably should.

Batman: Arkham Knight is due out on 23 June.