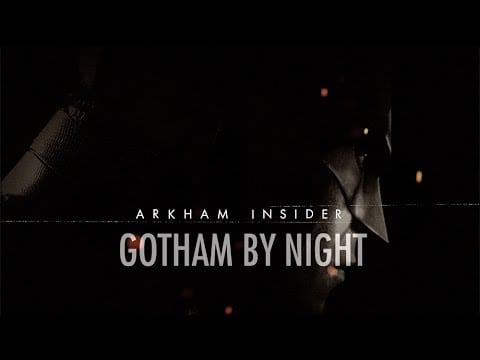 I’m starting to get a little bit worried for Gaz Deaves, Arkham Insider’s extremely excitable host; if he gets any more hyped and enthused, he may literally combust.

In this latest trailer presentation thingie, Gaz gets VERY EXCITED with ‘player code director’ (the chap in charge of Batman’s moveset in Batman: Arkham Knight,) Adam Doherty. We get to see a bit more of the Gotham skyline, and get a better idea of the scope of the open world in this third Batman: Arkham title.

It looks extensive, so it’s fortunate that Rocksteady have sped up the glide move for ease of travel. You can also now do a 180 degree turn in mid-air with the grapple line, which should be handy.

Later, there’s the hilarious sight of the Batmobile ploughing through some hapless bystanders (don’t worry! I think an electric field means they’re just ‘stunned’ … stunned, and with many broken bones.) You can see all of that in the video, below. It’s not clear which platform the footage was captured on, but prior videos have been based on the PS4 version.

Now, Gaz, please, deep breaths. Don’t do yourself an injury before Batman: Arkham Knight comes out later in June.

Is Heroes of the Storm for you?