If there’s one thing I’ve taken away from what I’ve seen of Batman: Arkham Origins, it’s that it feels authentic. 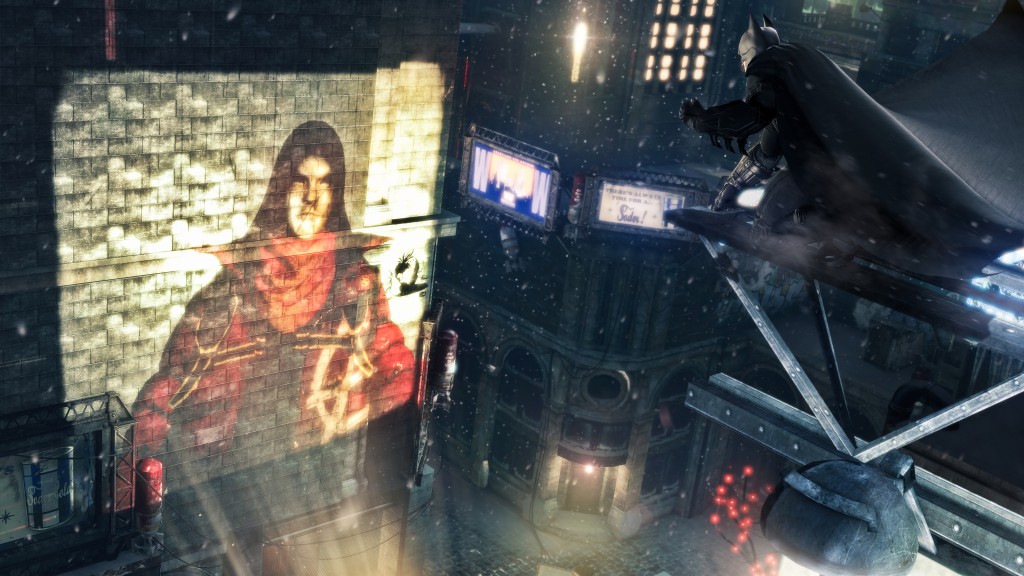 The Queen’s Christmas Speech was a little bit odd, that year.

The timeline is jumping back to an earlier point, but it’s still recognisably the Arkham universe; it’s still the same vision of a grim Gotham. The voice actors have changed, but they’re still recognisably the Arkham Batman and Joker. They’re not new takes on the old characters – they act and sound in generally same way, albeit without the years of backstory behind them. And as for WB Montreal heading it up… well, it still seems to play like an Arkham game. If nothing else, Arkham Origins appears to be in safe hands.

As you’ve probably heard, Arkham Origins is set on Christmas Eve back towards the beginning of Batman’s career (think Year One/Year Two and you’re in roughly the right area). This isn’t the Batman that’s known and feared by criminals everywhere, nor is he championed by police; he’s an urban legend who the mob consider a serious nuisance, and the (corrupt) police consider a wanted vigilante. To that end, Black Mask – a classic Batman antagonist that works as a nice crossover between “mob boss” and “supervillain”- attracts eight assassins to Gotham with the promise of $50 million for whoever takes down the Bat.

I confess that I thoroughly approve of the Christmas setting. There’s a really nice dichotomy to seeing Gotham – a dark, grim, gothic city where terrible things are going on – covered in powdery white snow and illuminated with Christmas lights. Yes, okay, so Batman’s being hunted by eight professional killers who are probably the toughest enemies he’s faced in his nascent career, but it’s Christmas!

Nothing says “Christmas” like punching a load of violent anarchists in the face. If you live in certain parts of England, anyway.

I can’t talk too much about the story or the characters, because Warner is being coy about all of this and is dripfeeding us the details, but mechanically it’s completely familiar. You still traverse the environment (now Gotham City, rather than Arkham Asylum or Arkham City) by gliding around and grappling onto things to give yourself a little boost. You still punch thugs in the face with freeflow combat. You still get little lightning bolts appearing above their head to indicate when you need to dodge or counter. What is new is that the XP received from fights can be fed into an upgrade tree to unlock new gadgets and skills, and better versions of the ones you already have; rather than just picking your next unlock off a list, it looks like there’s going to be proper progression here.

Also new is the crime in progress system. Previously Arkham games had random enemies wandering around, or maybe the odd crime to stop – perhaps a couple of muggers harassing someone – but here, they appear to be more like miniature events. A group might be robbing a bank or somesuch; you’ll get an alert and a waypoint on your screen, and if you decide you want to foil their plot then you can swoop on over there and take them down. Again, not a major change to the previous dynamic events, but an evolution of what was already there to make it all more interesting.

Batman’s a traditional, “thought-that-counts” kind of guy. He gets a little bit uppity if you just go for vouchers at Christmas, as this Armoured Enforcer’s face is about to discover.

These also promise to be a little more challenging thanks to the addition of new enemies. One of the two shown off is the Armoured Enforcer, whose size and protection means that he can pick up Batman and fling him around like a doll, and his armour needs to be ripped off before he can be taken down. The other, though – the Martial Artist – is much more interesting. He has the same combat options as Batman, meaning he can counter your attacks. He can also counter your counters… but that’s okay, because you can counter his counter to your counter and oh dear I’ve gone cross-eyed at the thought. If this doesn’t lead to some hilarious counter-counter-counter-coutner-counter tennis rallies, then Warner have missed a trick, but either way the combat will likely revolve around prioritising targets as much as rapid reactions and a constant flow of attacks.

Speaking of hilarity, the one new gadget that’s being displayed this E3 is the Remote Claw. This fires off a Batclaw which has a sub-Batclaw within; once the first strikes a target, the second one shoots off to hit a second target, and ropes them together. In short, it’s Rico Rodriguez’ grappling hook. You can use this for traversal, yes, but you can also use it to tie two people together… or, more amusingly, aim the first claw at a person and the second at a gas canister. When the second claw attaches to it and then the rope retracts, your enemy is getting a faceful of heavy object. Sadly, it doesn’t look like KAPOW will flash up on screen every time you do this.

I’m sad to say that the Joker’s attempt at a Christmas jape bombed.

This is the one section that genuinely does look new. Arkham Origins‘ revamped Detective Mode has Batman examine the crime scene and use evidence lying around to virtually reconstruct what happened. Example: there’s a helicopter crash. You can look at the angle the helicopter crashed at and so on, and rewind your virtual reconstruction to see where it smacked into a building. You can then hop on up there for a better view and rewind a bit further to see where it suddenly took a nosedive towards the building, and then use further evidence laying around to work out why that happened. And then… you get the idea. Alternatively, you can just use the reconstruction to watch the helicopter smash into the ground and see the pilot fly out of the cockpit over and over again. You bastard.

In short, it feels a bit more like actual detective work than just wandering around an environment in a first-person view and occasionally finding something interesting. Mechanically, that’s what it might well turn out to be (only with “time” as an extra dimension to further complicate your looking-for-evidence) but stylistically it’s a gorgeous touch.

Mechanically, I have no doubt that Arkham Origins is in good hands. This appears to be authentic in almost every respect; it’s not a case of a new broom sweeping away all the goodwill built up with the last two games. The game looks like an Arkham game. It appears to play like an Arkham game. It’s just got a few new twists, changes, and upgrades to differentiate itself from its predecessors. 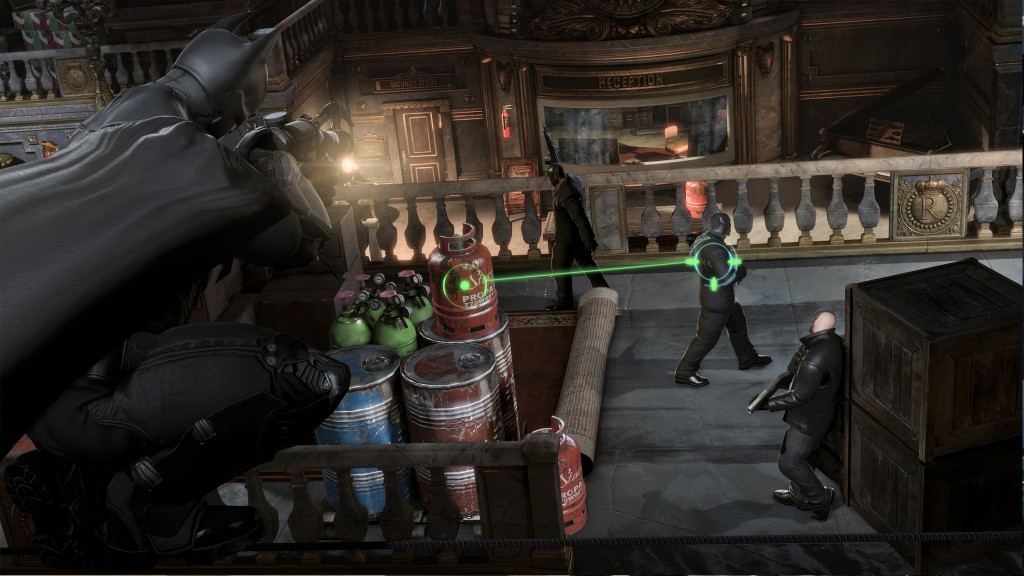 I’m going to break from the BATMAN AT CHRISTMAS stuff to reiterate, once more, that the Remote Claw is hilarious to the extent that I wish that either this was an animated gif, or I had before/after screenshots.

The one area I can’t comment on is the one that’s most worrying, really, and that’s how well everything will mesh together. Arkham Asylum and Arkham City were both precision-designed; they slotted everything together almost perfectly and it never really felt like you were doing a stealth bit, then a stealth bit, then an action bit, then a detective bit, then a stealth bit. They were phenomenal titles because they had a unique sense of flow, character, and unity. This is something that can’t be judged based solely on a 15-minute preview, and it’s honestly the biggest challenge Warner will face with this new title.

As such, I can’t definitively say that this is going to be as great as the previous Arkham games because the most important thing is something that can’t yet be judged. There’s a lot that could still go wrong, or that might not work right, or that might not fit together just so.

But what I can say is this: what I’ve seen looks sufficiently encouraging that, even if things do go a bit tits up and the oh-so-crucial flow and feel just aren’t present in the end, the worst thing I could expect to say about Arkham Origins at launch is that it’s not quite as good as its predecessors. When those predecessors are Arkham Asylum and Arkham City, “not quite as good” is still a ringing endorsement.

By Steven Wong13 hours ago
News

By A.K Rahming7 days ago
Previews