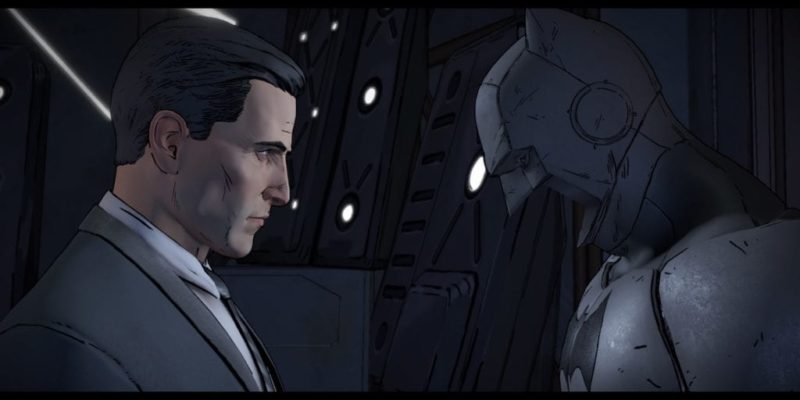 After a frankly underwhelming opening episode, Batman is back for another go at not being a bit shite on PC. I have three major thoughts on this: it’s still a bit of a technical mess, Episode 2 is paced and plotted quite a bit better than its predecessor, and there’s at least a possibility that Telltale are actually doing something exciting with this. We’ll get to them in turn. I’ll also be avoiding any hard spoilers, although I’m going to have to talk a bit about the series’ overarching plot, so…

Batman – The Telltale Series: Episode 2: Children of Arkham, to give it its full and hilarious name, has given me a bit of a better idea of what Telltale are doing with this series. If things follow on in this way then each episode is likely to be a largely self-contained story, with ties to the overarching plot. While the first episode dealt with Carmine Falcone and the mob, episode two shifts its focus over to the Penguin and his plans. 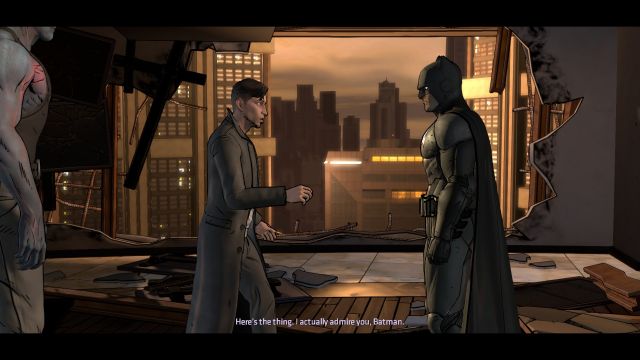 Obviously, there’s the bigger plot as well – Harvey Dent’s political career, the shady past of the Wayne family, and a rising undercurrent of villainy that the Batman has to tackle – but this episode, at least, would stand on its own fairly well as “Batman takes on the Penguin.”

Now watch as the next episode also focuses on the Penguin and I’m proven completely wrong. It’s also possible that the first episode was more of a setup for the entire series and now we’re getting into the meat of what the entire series will focus on, after all.

Either way, though, Children of Arkham works a hell of a lot better than the first episode. We’re focused a bit less on “by the way, Gotham is a bad place and Bruce is sad about his parents dying” and more on Telltale’s particular take on the Dark Knight’s world. The fact that this episode focuses more heavily on the Penguin, who was one of the characters from the first episode who managed to actually be interesting and entertaining, helps. 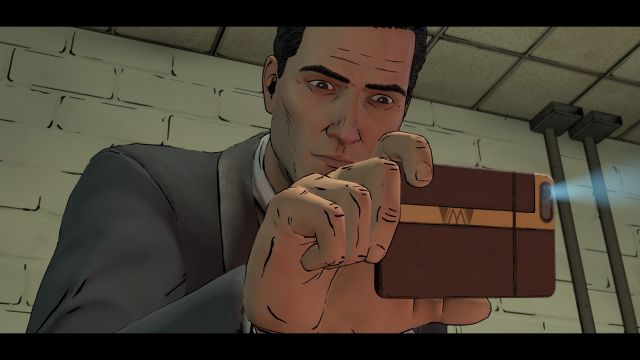 Where does he get those wonderful toys? A smartphone that apparently doubles as a magic forensic scanner, in this case.

It’s not just that, though. Rather than opening in medias res with Batman foiling a robbery (which we have no reason to care about) through the magic of QTEs (which everybody hates), we get to relive that fateful night in Crime Alley when Joe Chill did a bad murder, in the hopes of discovering some clues regarding the allegations that the Waynes were actually pretty far from saints. It was something built up in the first episode, and again, it’s a specific look at how this particular iteration of Batman is dealing with some of the more iconic set pieces and characters, and how it’s trying to differentiate itself from every other incarnation of Batman out there.

Speaking of set pieces, there are a few decent ones in this. There are some actual decisions (well, one) that impact what scene you’ll see next, a couple of choices that are actually a bit tricky to make, and a QTE section that’s not entirely hateful. The latter is a stylish bar brawl which takes pretty much every bar brawl trope to glorious excess, and to my mind, it’s one of the best fight scenes Telltale have done yet. I’d still prefer to see a non-QTE way of handling action sequences – and the rather good “plan out your attacks before emerging” does make a return later on – but at least this one is marvellously entertaining. 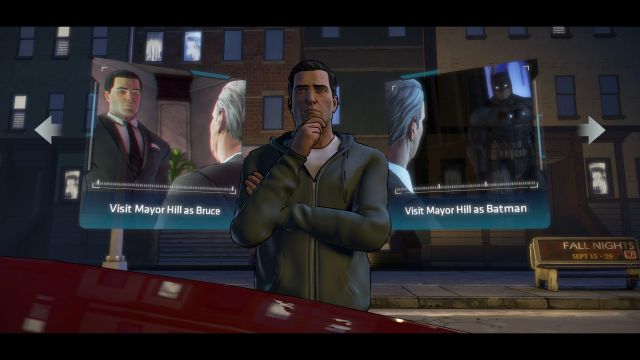 AN ACTUAL DECISION! Also, I like to think that he did actually stand there, hand on chin, for a few minutes while I contemplated this. In a shitty part of town. Next to a bright red sports car.

On the downside, there’s sod all in the way of detective work, and a couple of threads from the first episode are either brought up and quickly dismissed, or just make no appearance at all. Likewise, one rather major event towards the beginning of the episode is basically never brought up again, which is a tad worrying.

But for the most part the Batman stuff is actually pretty good, and the unfolding story is starting to draw my interest as it moves a little further away from stuff Batman has done a million times before. There’s a plus.

On the technical front, though, things are still incredibly shaky. While I didn’t encounter any of the really irritating save issues that afflicted me in the first episode, framerate drops were far from uncommon (which is bordering on ridiculous for an i7-3820, 16 GB RAM, GeForce GTX 970) and there were numerous bits where it’d cut to a black screen to load in the next scene… which did a really good job of breaking up the action, considering a fair few of these weren’t transitions to distant locations but to a different camera angle in the same place.

Animations still feel shonky and unpolished, lip-syncing is way off (to the extent that one character’s mouth didn’t move at all during one of her lines), and even the audio recording seems to have a few issues. One section of dialogue was apparently recorded with the actor standing a little farther from the mic than usual, with a bit of extra echo.

Even the QTEs can’t escape this general lack of polish. One QTE icon appeared on the face of the person Batman needed to punch… which was a bit problematic, because they were facing 90 degrees away from the camera. I could see there was a QTE there, just not what it actually was. That might be less of a problem if you’re using a gamepad, where you have lots of colour-coded prompts and can probably just see “red”, but it’s not great when you’re trying to differentiate between Q and E. Fortunately, as per usual, it’s very rare for messing up a QTE to actually have much impact.

It also does the thing that Telltale’s Game of Thrones game apparently did (I say “apparently” as I’ve yet to play it) in that it occasionally seems to ignore what you say or choose, once resulting in a conversation that made me go “Uhh… what?” because a comment was made about something I didn’t say, and once leading to a conversation changing topic with such a grinding gear shift I could almost hear it. This stuff is mercifully rare, but it happened. 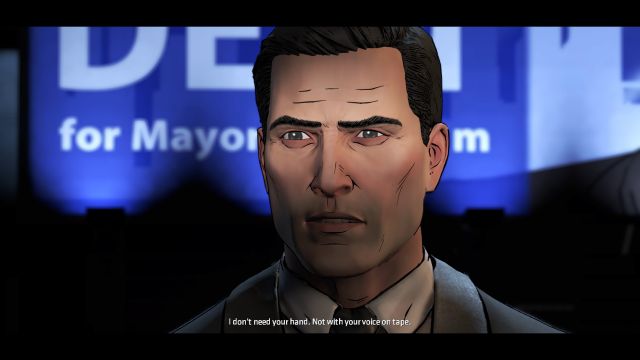 Despite the rough animations, there are some nice touches with the lighting, and the general art style is just lovely.

Finally, there’s the general Telltale-ness, by which I mean “do the systems and choices actually matter?”

Generally, the answer is still “No, of course they don’t, it’s a linear story and they don’t have an unlimited budget.” There’s that aforementioned choice which alters the next scene, and that’s about it. QTEs still only seem to matter in a general sense, and most of the other choices will likely only really impact bits of dialogue. It’s an elaborately staged production, but it’s one we’ve seen many, many times before.

There’s one possible exception to this, and it’s the very final decision of the episode. This is what I meant earlier by “something exciting”. I can’t really talk about it without spoiling it, obviously, but… well, it’s potentially a big decision.

If there’s one thing I do really like, it’s the banter between the Bat and the Cat. Also, “Maybe there’s hope for you yet” probably sums up my opinion of this episode.

Now, I fully expect this decision to wind up either 1) meaning nothing and the aftermath isn’t really brought up again, or 2) railroading it in a later episode so that the same result basically plays out under different circumstances… but! There is the possibility that it’ll resonate throughout the rest of the episodes. It’s a fairly major bit of Batman “lore”, and the chance that we might actually be able to avoid that and see a Batman world in which something else happened is a heart-pounding thought.

But it’s Telltale, so I’m expecting it to either mean nothing or get railroaded later so it happens anyway. I mean, I’m not getting my hopes up. I’m just saying that the possibility is there.

I’m still making up my mind about whether or not Batman – The Telltale Series is a shadowy hero or a vigilante menace, but this episode is certainly an improvement over the previous one. If it stays this course, it’ll at least be worth recommending for those who aren’t sick of Telltale games or who really like Batman, but for now I’d still urge caution. While better, there’s still a certain broken feeling to basically the entire product, and the jury is definitely still out on whether it’s going to be able to spin a worthwhile and original yarn, or if it’s just going to pull from classic Batman stories and not really do anything to stand apart.