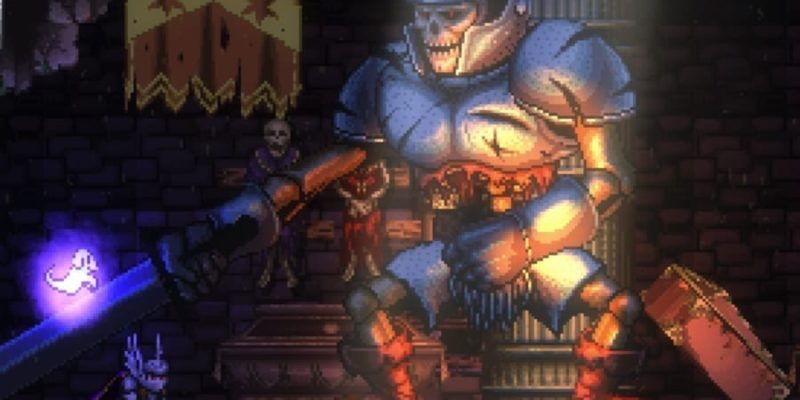 I find it enjoyable to go back and play games you remember from childhood. It’s fun getting lost in time while platforming, exploring, or blasting pixels. But I often forget how difficult some of some of these games were. Titles like Ghosts’n Goblins are viciously tough for many reasons. Enemies approach with tenacity, and the platforming is mostly done with strict rigidity. A single hit can vault you backward into other enemy hazards.

Battle Princess Madelyn is built on all of the aforementioned concepts. Deaths become pedestrian with enemy attack patterns having varying degrees spontaneity. But using Ghosts’n Goblins as a blueprint has both positive and negatives aspects. As I played through each level, I saw a clear struggle to balance the modern with the past.

Maddi Will Save Us!

One of Battle Princess Madelyn’s main features is how the main character is modeled after the developer’s seven-year-old daughter, Madelyn. It’s a fact that was highlighted throughout its Kickstarter campaign and its subsequent promotion. At first, I thought the idea of creating a story based on one’s own kid was charming. I looked forward to going no an adventure with Madelyn with her ghost dog Fritzy at her side. However, the novelty eventually wore off and the game started to feel cheesy. 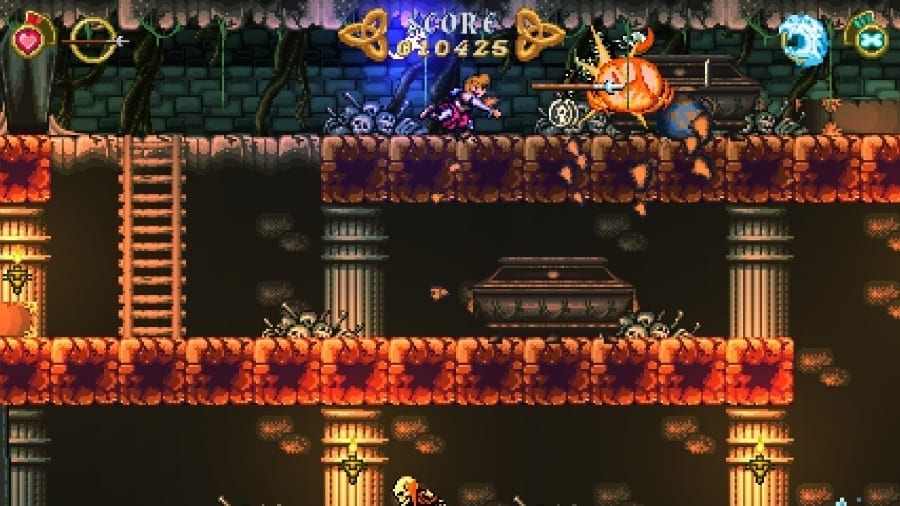 It’s kind of like those storybooks you got as a kid where your parents have your name appear as the main character. Characters make a point of stating how Maddi will save them as though they have to pump up her self-esteem. I won’t say it was overdone, but there were times when I said to myself,  “Okay, I get it.”

As the game progressed, I found myself wondering whether the whole innocent-sounding setup was some kind of Trojan Horse for the rest of the experience. The game’s cuteness and presentation didn’t prepare me for the many deaths that lay ahead. All of it was underscored by the constant stream of expletives I rattled off while playing. For a game that features the developer’s daughter, it sure is bent on killing her.

I realize that high difficulty is part of the classic game style Madelyn pays homage to. You immediately notice how the thrusts of her attacks are reminiscent of old 16-bit games. Even Maddi’s weapons, which include projectile daggers and a lance, are clearly inspired by Ghouls n’ Ghosts. But Battle Princess Madelyn goes overboard with it. There are elements from modern Metroidvania titles, but they didn’t help with how incredibly difficult and confusing the game can be. 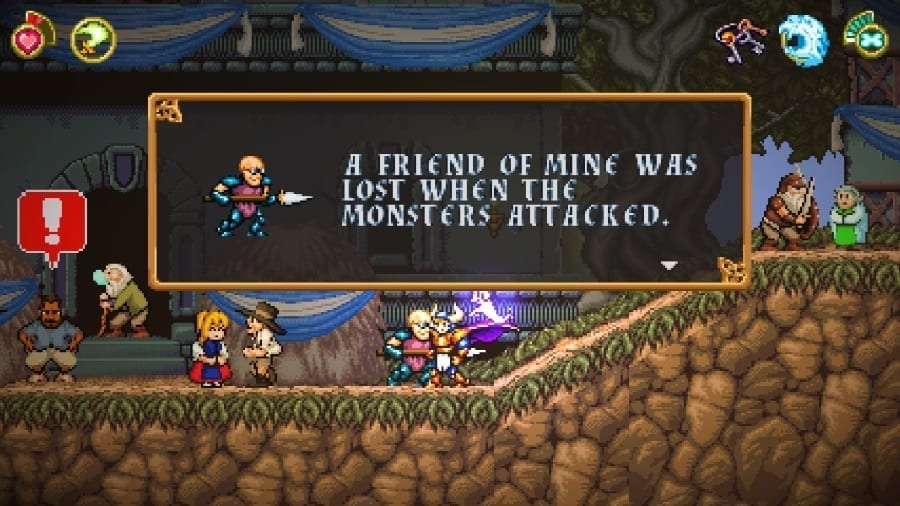 At one point, the game became so directionless that I had to ask the developer for help when I got stuck. The puzzle was in a cavern where the clues were separated by platforms and cliffs to climb. Switches on each of the ledges were the key to opening a door on the far right of the map. I don’t think I would have figured the puzzle out on my own with the available hints.

In responding to my request for help, the developer noted that the problem may be addressed in a future patch. Perhaps Fritzy will provide more hints. But as of this writing, the issue hurts the experience.

After my stint in limbo, the game started to feel more directed, better indicating where to go and what to do. Although I got a much clearer sense of progression, there was still one thing that made me want to give up on the game altogether.

At the start of the game, you’re given a narrow view of the exploration that’s ahead of you. Madelyn’s world then quickly opens up with new secrets and areas to discover. Each new locale has its own set of obstacles and enemies to overcome. There are also townspeople who hand out small side missions. Although these missions can be fun, most lack diversity. Find this spoon within a level, save this kid who went into the mines, etc.

On the other hand, boss battles deliver a fantastic sense of completion. It’s getting to them that’s the problem. 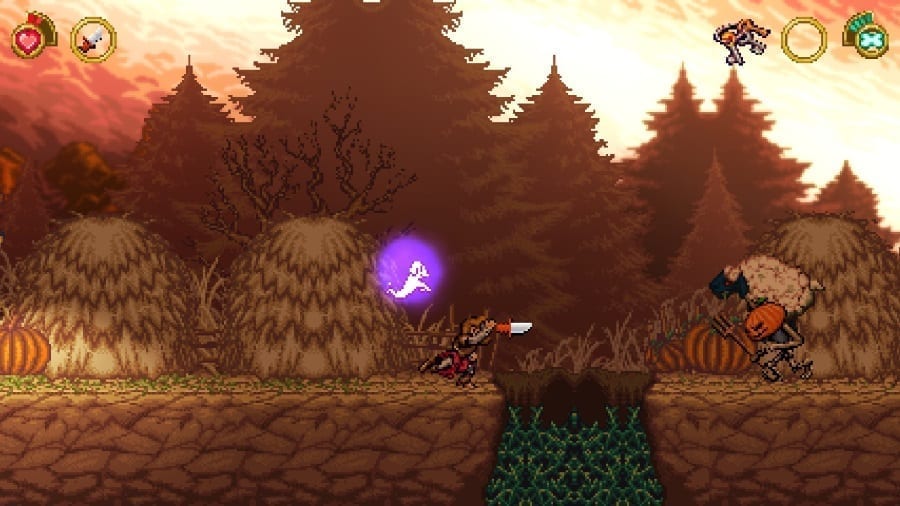 Each level starts to segue into the next, somewhat pointing you in the right direction to go on your merry way. Frustrations start to run rampant when you complete a grueling march up to the doorstep of a boss, only to have to do it all over again, this time in reverse. The same enemies now litter the path out of the dungeon you just ran through, along with every blade and spike trap. The repetition, in addition to all the punishment I was enduring, made the entire experience feel tiresome.

To add to the sometimes grueling pace, there were a number of visible bugs. For example, when jumping from a ledge to explore an area below some zombies, Madelyn was completely unable to move. The only option given here was to quit the game, causing it to crash and lose progress. Other major glitches include misidentified weapons in my inventory (such as keys shown as daggers), being unable to swap to new weapons, getting stuck in a wall during a boss fight, extra door keys that don’t open any doors, and the button map spontaneously changing during gameplay.

But Battle Princess Madelyn has two massive redeeming qualities. The first is that each level felt original and expressive. From unique enemies spouting projectiles to simple frog-like-creatures spitting poisonous goo, there is a lot to appreciate. The second aspect is the chirpy soundtrack.

Most of the music carries the main heroic march of the game, while others bounce catchily along. I honestly found myself humming the main theme while I was ironing a shirt once. Tunes on most levels echo its scenery and style, sometimes even having an almost empowering, Nordic tone. 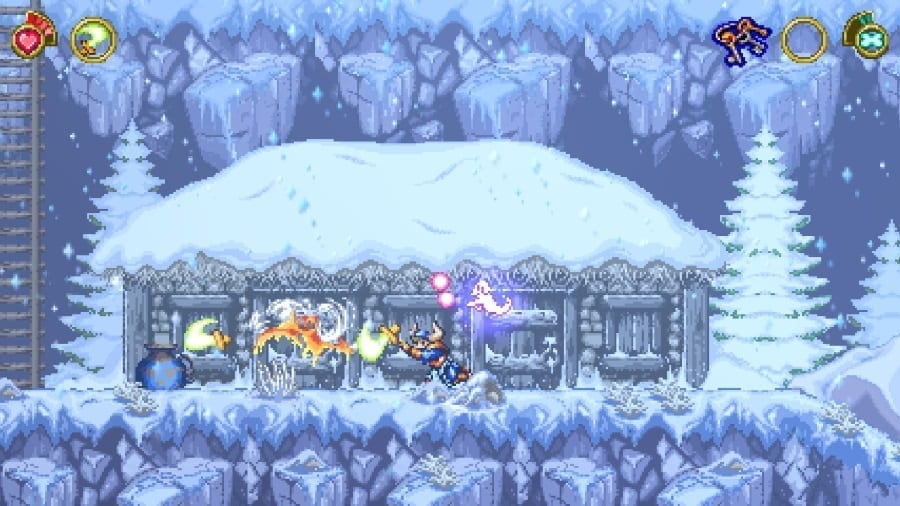 Even though the game nailed the visuals, music, and sometimes exploration, there were aspects that seriously hurt the experience. When fumbling during tense platforming, it’s often hard to determine if the error was mine or not. There were many other areas outside general polish that I began to notice.

Not Quite Pixel Perfect

When I was first introduced to Battle Princess Madelyn, I was intrigued by its visual design. Learning the story about its development further piqued my interest. But after sinking teeth into the game, I found myself questioning whether the game lived up to expectations. Even after I spent 10 hours playing, it’s still a difficult question to answer.

The visuals and music are, hands down, nailed with perfection, harkening back to titles that have paved the way on the road to nostalgia. However, there are a noticeable number of blemishes, frustrations, and experiences that take away from the journey.

At this point, I find myself less intrigued by its originality and more weathered by its repetitive nature. There is a great game somewhere within Battle Princess Madelyn, but it’s hard to find. Maybe it’s something that could have been delivered by trimming down the repetition or the grueling difficulty.

Battle Princess Madelyn is both impressive in both visuals and audio. For better, and sometimes worse, the game has modeled itself after difficult games like Ghosts'n Goblins. Metroidvania fans will enjoy the expansive levels, however, satisfaction from level completion and boss fights are less thrilling provided the immediate backtracking you'll perform back through harms way throughout most of the game.