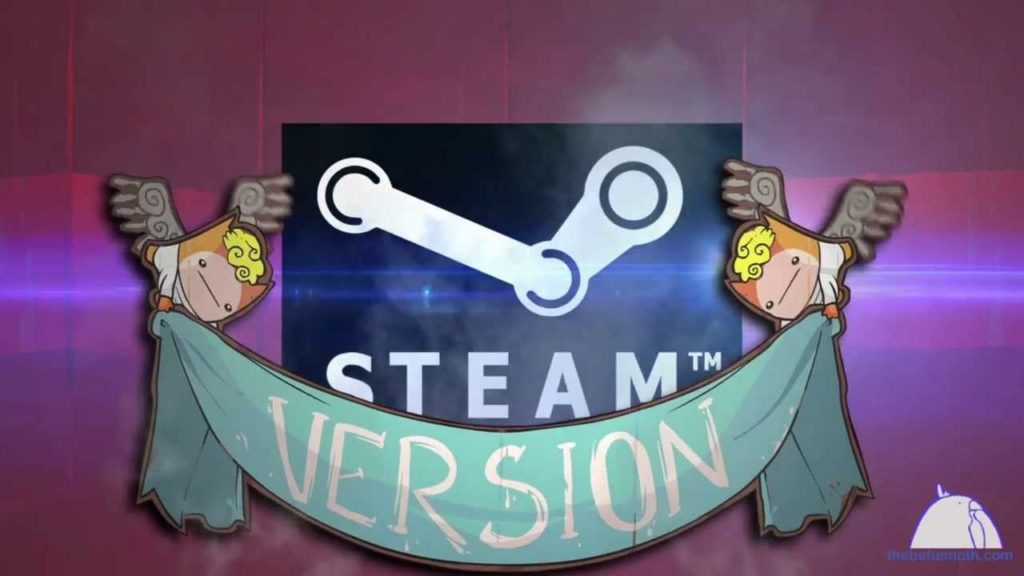 While they’re still just a trickle amidst the gushing tap of game releases, semi-reactive narrators have managed to top up a couple of titles in memorable fashion. From Portal’s scripted jibes there’s a line of progression to more flexible disembodied voices of wisdom like Rucks from Bastion. Lately though, only Call of Juarez: Gunslinger has done much with the single player narration gig, altering the scenery of levels as an old bounty hunter span his tall tales and chewed grits or whatever it is cowboys do.

But between Bastion and Gunslinger came The Behemoth’s BattleBlock Theater, a game lit up by the bright and fervid chatterings of one William Idunnoifhehasamiddlename Stamper. Like Castle Crashers, BattleBlock was previously consigned to hard labour in the mines of Xbox Live Arcade. Unlike Castle Crashers, it didn’t take several years to break through the surface to the fertile plains of PC.

A cheerful cat breaks the fourth wall as it coaxes a nearby boat.

The Behemoth are one of the all too rare development teams who bring a recognisable tone and visual style to everything they put out. Just as Castle Crashers took the side-scrolling hack-em-up concept and turned it into a medieval journey of faeces-propelled deer and strange, cliffside-dwelling tribal bears, BattleBlock Theater spins a 2D platformer into an absurdist saga of the performing arts, cats and death-defying leaps. Over more cats.

Central to this whole performance is Stamper’s narration. He doesn’t just provide the gung-ho vocal warblings for the stick-puppet themed cutscenes, but also chips in with a gob-load of situational quips during regular play. “Maybe if you let them sniff the back of your hand first, they might stop being so mean” he offers, as your little guy gets nuzzled into deadly water by the tubby feline form of the (newly-fattened for PC) guards. The gems you need to collect in order to unlock each level’s exit are “green and shiny … just like baby poops!” And whenever you approach a difficult segment, chances are Stamper will be there to offer some variation on the theme of “don’t mess up … don’tmessup, don’tmessup!”

You know what? Those lines don’t really sparkle as they should in boring black and white. It’s all about delivery and context, so for a better idea of what I’m getting at with this narration business, watch the Steam Version announcement trailer. Amused? Yes? No? If yes, you will “get” what BattleBlock Theater is going for.

You can turn the narration off if you really want, but that would be rather like turning off the grappling hook in Just Cause 2. You’d still be playing, but in a rather sad way.

A grumpy purple git attempts to push an overly affectionate cat off a cloud.

After being shipwrecked on a mysterious yet theatrical island with your dependable friend Hatty Hattington and some other chums, Hatty gets whiske(re)d away by weirdo cats and everybody else gets imprisoned. Bummer. Worse, you’re expected for perform increasingly dangerous feats of platforming excellence in order to gather gems and delight the crowds.

Mechanically, that means eight sections of theater, each with nine ‘regular’ levels, a two-part ‘finale’ and three knuckle-knawingly aggravating ‘encore’ stages. That’s a total of … hold on here a second … 112 levels. If the finale bits count as two, anyway. Technically you could double that number, because if you play through the levels in local or online co-op they’re ever so slightly different. This is to incorporate the need to help your buddy by tossing them over/into danger, co-operatively activating switches and the like. Actually screw all of those numbers, because BattleBlock Theater also has a fairly straightforward level editor and a method of showcasing user-made stuff as part of a weekly, rotating ‘Furbottom’s Feature.’

So yes, lots of levels. A never-ending cascade of the buggers. They start out pretty simple, but eventually mangle your character in so many horrific ways you’ll have seen more insides than an eager pathologist. BattleBlock Theater does a great job tumbling out a steady pile of concepts, testing and re-testing the player’s skill set in multiple cunning ways. Just when you think you’ve mastered a given technique, it whips the tablecloth out from under you. By the time you reach the final numbers, you’ll be double-jumping to a set of monkey bars placed perilously between some saw blades and choosing the precise moment to drop to a strobing set of platforms. All without even breaking sweat.

Actually that’s a lie, you’ll be ballsing up at least two parts of that sequence time and again (probably the bar-grabbing which sometimes seems a bit “off”) as you watch your hapless avatar get mashed to bits, drowned and electrocuted. But then you’ll get it right and do one of those awkward videogame victory dances that could be mistaken for a mild seizure.

A harrowed man glances back at his fate.

A mere triplicate of gems are required to unlock the exit in each level, but there tends to be a minimum of six in the stage. Plus a roll of yarn, which can be traded with corrupt feline guards in exchange for special weapons. These are handy for dispensing with roaming enemies that lurk in certain portions of some stages, but some also have additional uses like the gun which fires a sticky pellet that can provide you with an additional, temporary platform. One of the PC version’s tweaks is the ability to carry a pair of these weapons and switch between them.

If you want to get the elusive A+ grade and all of Stamper’s praise, it’s also necessary to finish each stage within a time limit. Early on, this happens practically by default, but (if you’re anything like me) you’ll quite rapidly turn into the school kid who knows he’s smart but feels like just coasting along on A’s and the occasional B rather than putting in the extra effort. If you’ve got the supple reflexes necessary for completing all of the Encore stages with an A+, then I salute you. If you can do it on Insane Mode (which removes all checkpoints, meaning any death returns you to the start of a stage) then you may very well be a witch of some kind.

Your incentive for hunting down more gems is that they can be exchanged for one of BattleBlock Theater’s hundreds of prisoner heads. The heads come in all shapes and forms, so if you hoard enough gems the start of every level can be an identity crisis of your own making.

If you need a break from seeing your stable of prisoners die in single player and want to be the one pushing people into spikes for a change, there are a selection of competitive modes to divert your attention too. These tend to rely on BattleBlock’s melee and weaponry systems, as you attempt to steal an opposing team’s curiously pig-like horse, grab enemy player’s souls and run away with them, or chase a giant golden whale. From what I’ve managed to play pre-release (and what I recall from the 360 version,) most of these games devolve into ludicrous chaos almost immediately, which is pretty much in-keeping with the game’s pervading theme.

A haunted ghost springboards off an unfortunate soul, while a disinterested cat refuses to look on.

The game has made a capable transition to the PC, accompanied by the options you’d probably expect for a boisterous 2D platformer. Resolution maxed out at my monitor’s native setting, windowed mode is an option (though no borderless that I could see) and there’s Steam Workshop integration for all the user-made level stuff. The Behemoth recommend a controller as the preferred play option, but the re-definable keyboard controls are a functional alternative if you have a pathological fear of peripherals with triggers and buttons. Some latter-stage maneuvers might be harder to pull off on keys, but then they’re not exactly simple on a controller either.

BattleBlock Theater applies its Newgrounds-does-Vaudeville theme with resolute gusto. You’re a performer in a bizarre theater, having your own strange tale recounted to you (in puppet form) by a narrator. Playing a play within a play, in other words. But one with quite a lot of jokes relating to poop. The platforming is just shy of being as tight as, say, a Super Meat Boy, but when you’re captivated by a performance as strange as this it’s easy to overlook the odd stumble. Energetic, willfully immature and tremendously silly throughout, BattleBlock Theater’s entire feel is in harmony with its prominent narration.

Superhot Fires up with New Gameplay Trailer and Kickstarter Campaign