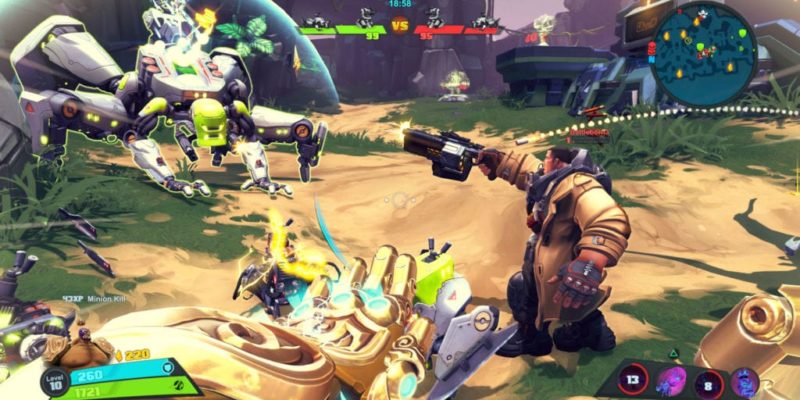 Battleborn is still a thing, and if you are playing it, then there’s a new multiplayer mode coming this month.

Called Face-Off, the mode will be free for everyone and it arrives on 13 October promising “intense, multi-phase battles!” This is how it will work:

In these 15-minute, 5v5 battles you’ve got to quickly take down the Varelsi. As you drop them, they drop masks. Collect those Varelsi masks to score points. The first team to 500 wins. Sounds simple, right? Well, first you need to get those masks to the depository in the center of the map.

It’s hard to believe the Varelsi will just let you get away with slaughter. As the match progresses, and players level up, the Varelsi also get tougher. Each match has multiple phases, so expect intense boss battles as the Varelsi attempt to get even and throw a wrench into each team’s plans.

Face-Off takes place on Capture maps – Temples, Snowblind, and Outback – with some key changes. There will be up to six Varelsi spawn camps in different locations around each map. The mask depository is located near the center of each map, at frequently contested points. Private bot matches will not be available at release but may be an addition further down the line.

One more thing to look out for in Face-Off are buildable MX.Headhunter assassins! Tough, fast, and vicious, MX.Headhunters will strike down enemy players and help foil the enemy’s mask collecting progress. Similar to Super Minions, Headhunters are buildables that can be purchased in a match with Shards.

There are two ways to get masks: Pick up dropped masks or steal them from enemy players. Varelsi drop masks upon death. Race against the other team to pick them up and get them to the depository. If a mask-carrying player gets taken out before reaching the depository, they will lose all of their masks upon death and a portion of those masks can be picked up by other players. While Varelsi drop a limited number of masks at a time, players can carry quite an armful. It’s up to you to help protect your overburdened teammates make it to the depository. The more they have, the bigger a target they may become. Same goes for the enemy team – Killing enemy players is a nifty way to steal masks, so keep an eye out for those carrying a heavy load of masks.

Players also drop all of their masks when teleporting. If you need to go back to base in a hurry, make sure to teleport nearby an ally so they can snag your dropped masks and get them to the depository.

A new mode is unlikely to bring people back to Battleborn but at least Gearbox are still trying to salvage the game. Free to play anyone?