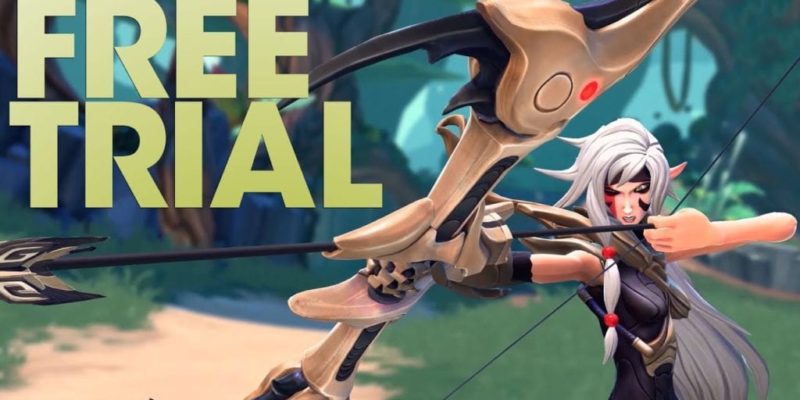 In an effort to boost dismal player numbers (at least on PC), Battleborn has taken the inevitable step of making its multiplayer modes free. The Free Trial version of Battleborn can be downloaded through Steam from today.

The free version gives players access to all competitive multiplayer maps and modes, with no restrictions on time or levels or anything like that. In terms of the heroes you’ll have access to, Gearbox says a roster of six will rotate every week. Progress with each hero will remain, so when they come back around players can pick up where they left off. There will be a matchmaking queue specifically for new players, until they reach Command Rank 20.

Naturally, if you like a particular Battleborn hero during free play, they can be purchased with in-game or real money. Cosmetics, gear packs, XP boosts and so on are also sold in the marketplace. If you purchase the ‘Full Game Upgrade’ ($30), then you get “all 25 base characters, all eight Story Mode missions and the Prologue, as well as permanent access to private matches.” Progress from the free version will, again, carry over.

Those who already own the full version of Battleborn will be getting some extras today. ‘Founders’ will receive “Founder title and Founders bonus content, including Legendary Gear, 1,000 Platinum, 50,000 Credits, Loot Packs and more, plus an exclusive “Founder’s Crown” Flair item.”

Gearbox’s strategy seems similar to that of Turtle Rock when they made Evolve free to play. That move boosted the player numbers dramatically, but the game ultimately was still shut down by Square Enix (possibly because those numbers were not translating to sales, but it’s unclear). We’ll see how Battleborn does in the next few weeks.

ELEX gets another gameplay trailer