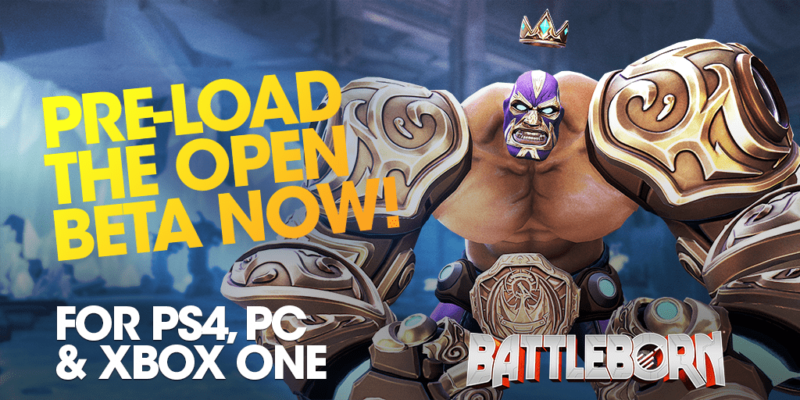 Gearbox is getting ready for the Battleborn open beta which starts on 13 April at 10AM PST on the PC.

Although the PS4 tests starts tomorrow, the open beta can now be pre-loaded for the PC ahead of next week’s test. The link to pre-load is on the main Battleborn Steam page just above “Available” date and the download comes in at 6.7 Gb.

The open beta includes the following when it eventually goes live.

Update: A bootcamp trailer has also been released.

During the Open Beta, you’ll be able to experience the natural progression of Battleborn; including two Story Mode episodes, two Competitive Multiplayer Modes, 25 heroes (some instantly available, some will unlock as you progress), and as you play, you’ll rank up on three different progression systems.

STORY MODE: Go in solo or co-op with up to 5 players in two full Story Mode episodes: The Algorithm and Void’s Edge.

COMPETITIVE MULTIPLAYER MODES: Challenge other players to duke it out in two Competitive Multiplayer modes: Incursion and Meltdown.

BATTLEBORN HEROES: Battleborn has a large starting roster of 25 playable heroes, which will continue growing with five additional, free heroes after launch. In the Open Beta, you’ll start with 7 unlocked heroes and others will be unlocked as you rank up and complete objectives. In the meantime, here’s a quick rundown of the main character types: Attackers, Defenders, and Support.