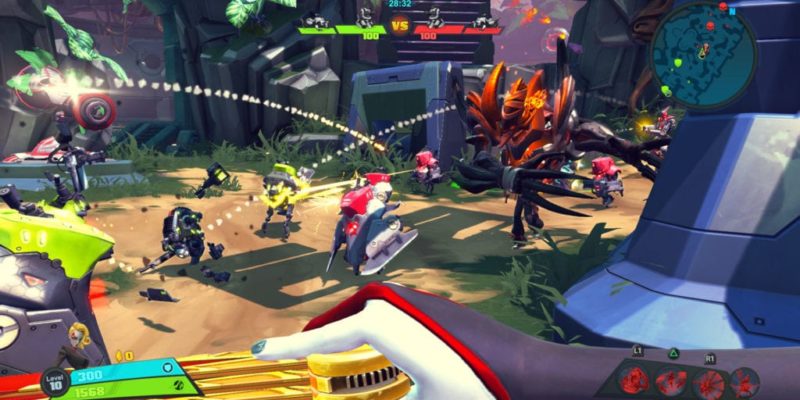 We’ve been messing around in the Battleborn a bit since the beta went live, and it’s a weird game. We’ll be looking at it more today but it’s a strange mix of multiplayer and co-op missions that seems OK, but we’re not quite sure what it’s actually trying to be. It is colourful though, perhaps too colourful. It’s like being thrown into the middle of a sweet shop explosion.

Anyway, a Battleborn patch has been deployed onto the beta servers with balance changes and tweaks,

Ambra’s ability to sustain damage and keep herself alive kept her as one of the top offensive picks. By reducing the damage and survivability, we see Ambra going back into more zone control roles where she has to proactively manage her sun spots. In addition, we found the beam range to put her at a medium to long range allowing her to kite melee enemies so we reduced the range to keep her more in short range category.

El Dragon’s damage output scaled way too high due to the passive and some bugs we found in testing. In addition, his ultimate is meant to be more damage over time so we reduced the instant damage component.

We like Galilea’s ability to jump into combat and be a front line tank. However, Galilea’s high attack damage promoted a much more aggressive behavior so we reduced her attack damage and immediate health regeneration. Reducing health regeneration maintains her ability to mitigate lots of incoming damage but now requires more tactical decision making then simply soaking damage and regenerating it all on a button push.

Ghalt’s promise of a shotgun wielding badass wasn’t being fully realized with the low damage per pellet. We wanted to reward Ghalt for closing the range so we increased the shotgun damage. Players should now see the shotgun tear through enemies in close range.

A lot of Kelvin’s ability to soak damage revolves around the passive shield manipulation. Most of the shield manipulations are multipliers based off of Kelvin’s Max Shield Value which was set to a low number. Increasing the Max Shield Value increases the passive and all augmentations that manipulate the shield. With the increased survivability, Kelvin better suits the hit-and-run Defender role.

We believe Kleese’s skills provide great area control but his base damage output was vastly underperforming. The increase to the primary attack and the secondary will reinforce some of the ranged damage loops for Kleese players.

We reduced attack damage and Fetch damage to tone down Shayne & Aurox’s ability to burst down targets while maintaining all the utility attached to Shayne & Aurox’s skills. We like where Shayne & Aurox sits between a harassing defender and a potential stealth killer. Removing some of the burst damage innate to our specialized killers helps keep Shayne & Aurox in that mixed role of harasser and killer.

We recognize some matches of Incursion stalling around the sentry. We’d like to iterate gradually since many changes can have huge rippling effects. We’re going to start with increasing the amount of time before a Sentry is able to begin recharging shields. We’re going to increase the time so that teams who control the push can sustain damage onto the Sentry without having to fight the complete shield every time.