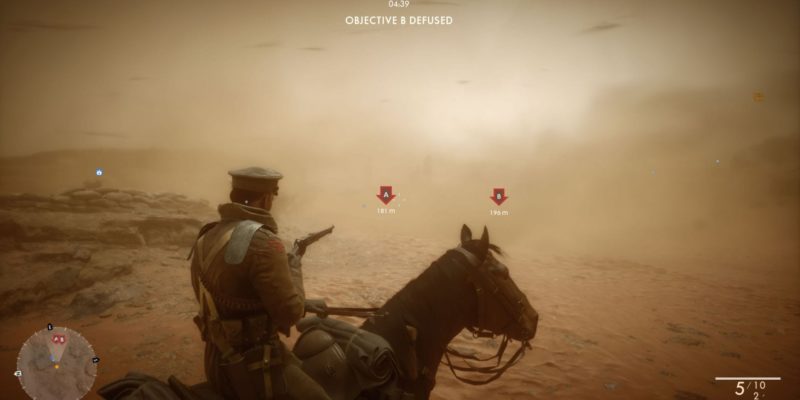 The Battlefield series lost its appeal for me some time ago, with successive releases offering the same thing over and over again. Star Wars Battlefront was a game I was eager to play, but didn’t take the plunge simply because I knew what was coming. Battlefield – only this time in the Star Wars universe.

Somehow though, Battlefield 1’s setting managed get me interested all over again. WWI conflicts were horrific, and more than anything else I was interested to see what DICE would do with this material.

The Battlefield 1 beta is now in full swing and I couldn’t resist diving in to see what they have put together this time because, if there’s one thing DICE does well, it’s create some visually stunning games.

Getting the technical stuff out the way. I have been running the beta on an i7 with 16Gb of RAM and a GeForce 980 which seems more than reasonable for a game like this. Framerate wise I have been getting 60+ FPS with no problems whatsoever, so there’s no complaints in that department. Let’s hope the final release performs just as well. 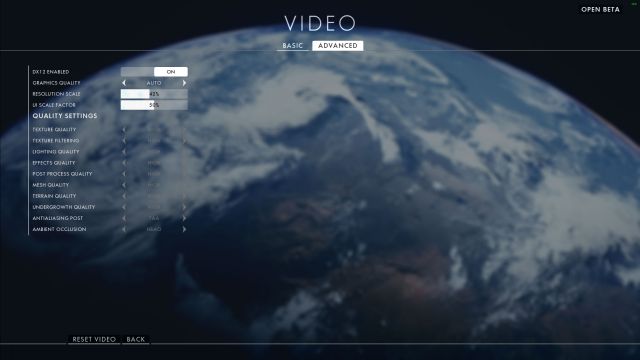 The more interesting parts of the Battlefield 1 graphics settings. 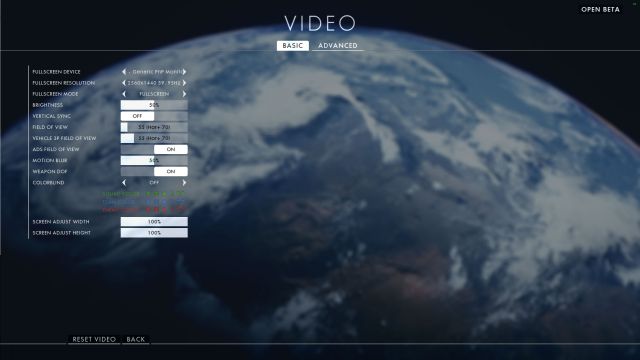 … and the ‘basic’ display settings. Look, an FOV bar!

The beta only gives a taste of the action with two modes, the main one being Conquest. As is traditional for Battlefield, this involves running around the map and capturing points. The African desert is the setting for the lone beta map, and each team vies to take control of as many points as possible in a race against the clock.

With so many players fighting on the map the teamplay feels a little lost. I’m not a huge fan of winning a game simply because a clock has hit zero and your team has captured more points in X amount of minutes. It feels quite unsatisfying and futile running back and forth between the same points. Still, the WWI trench wars were often rather pointless battles for tiny portions of land, so this is probably quite accurate.

Nice day to take in the sights of the temples.

Battlefield 1’s spawn system does let you jump into different points on the map, but that also adds to the feeling of being very much a solo player on this huge area of land. That sense of isolation makes sense because the desert map is so large, but it makes you feel disconnected from the team and the objectives. This will always be a problem when there’s a huge amount of players in one match. Unlike a real battle there’s no real communication, so it makes things a little tricky at times.

The Sanai desert map is gorgeous though; the harsh desert wreaks havoc with visibility at times with the wind howling over the sand dunes kicking up large dust storms. Rocky outcrops and well positioned cover points also feel quite natural. You really can’t fault the game’s visuals at all which only adds to the desperate feeling of fighting in a low-tech war. 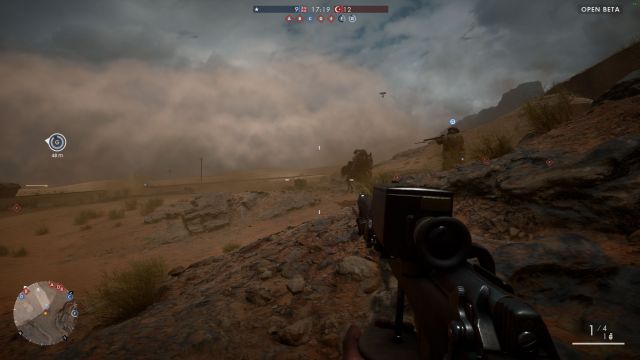 Battlefield 1 comes with all the usual vehicles (albeit with a WW1 theme in this case) such as tanks and faster armoured cards. Players dash around the map taking out targets and transporting other players between the capture points. It’s when inside one of these vehicles that more of an organic sense of teamplay kicks in. One guy might be manning a tank gun position while the other drives around. In one of the large British tanks there are positions for up to five players, and you can cause some real problems for the enemy when it’s fully manned. I had a good ten minute run in a tank with three other players, causing suitable amounts of mayhem and managed to capture point after point.

There’s been a lot of excitement around the addition of horses in Battlefield 1, but think of them as simply another mode of solo transport that allows for some attacking swordplay from the saddle. They’re quite handy for moving about, though leave you very vulnerable while riding. I had nightmare images of the battlefield being littered with horse corpses but they don’t really die unless they are hit by a large shell.

Aircraft are also available, and these whizz around above your head and are available to pick up at key objective points on the map. There are also anti-aircraft guns situated at some of the locations, although using these can make you sitting duck atop a roof. I still finding controlling aircraft a struggle, there were too many “accidents” when I was piloting these. It just takes some practice.

The second mode present in the beta is Rush, where one team pushes forwards down the map to take out communication telegraph points which are being used by the opposition to call in artillery. Of the two modes this is probably the more satisfying thanks to the sense of progression through the different map stages. 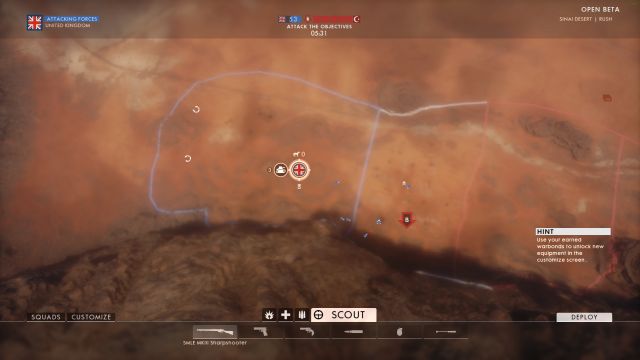 Rush through the battlefield stage by stage.

When coming in close to an objective the combat can get fierce, with bullets whizzing past your ears, and artillery shooting over your head from the many strategically positioned gun placements. It’s quite impressive, and all this chaos pulls you into what we have to assume is a WWI experience but (inevitably) a lot less harrowing.

There is a definite appeal to only having access to WWI weapons too. There are no hi-tech scopes or any other fancy modern technology to help you succeed. Tank grenades are large clunky objects, the rifles feel basic, and aiming with the automatic weapons is easier said than done. I found myself more often than not spraying bullets around my targets and I’m pretty sure I’m not that bad an FPS playeer. You have to learn and master these weapons to be effective. Not all weapons are available at the start, players need to level up to access more but that’s par for the course these days. And as for snipers … well, less said the better really, but I despise them with a passion.

A horse! A damn horse!

This beta is really just a taste of Battlefield 1, but I think DICE and EA have done the right thing moving the series to WWI. Although the interface feels a little modern for the period, they have made the gameplay feel gritty and dangerous. This could be a real return to form for the series in my eyes.