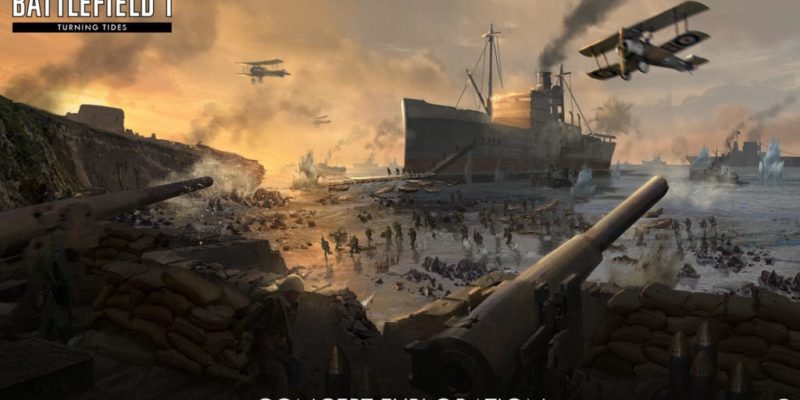 The next expansion DLC for Battlefield 1, Turning Tides, is all about remaining people that only part of WW1 was fought in trenches. Gallipoli and the North Sea will be the settings for a new set of amphibious battles. Four new maps. Six new weapons. One new Operation, and game mode ‘Conquest Assault’.

In December, the ‘Cape Helles’ and ‘Achi Baba’ maps will be released. The former has you storming the beaches of the Gallipoli peninsula as the British forces, or manning the defences as the Ottomans. You’ll need to “master the land, air, and sea” to win, apparently. For the other map, you’ll still be on the Gallipoli peninsula, but taking part in a “treacherous push” for a hilltop in 1915. This second map is more infantry-focused.

The new Operation will make use of the above maps, combining into one amphibious assault of Gallipoli.

Then, in January, Battlefield 1 owners of Turning Tides will get another pair of maps. ‘Heligoland Bight’ will be an “an epic naval clash as the British Empire Royal Marines and German Navy pit dreadnoughts, destroyers, and aircraft against each other,” plus infantry battles over Red Cove. In addition, ‘Zeebrugge’ will focus on “the daring British raid” against the Belgian port of the same name. This will be another sea, air, land combined map.

The six new weapons will include the “M1917 Trench Carbine, Maschinenpistole M1912/P.16, Farquhar-Hill, M1917 MG, Carcano M91 Carbine, and Type 38 Arisaka”. As well as that, Naval Cutlass and Grappling Hook will be available as close-combat options. You’ll also be able to don the attire of the Royal Marines, the British elite naval troops.

As mentioned, there will be a new ‘Conquest Assault’ mode too. This is a twist on the standard Conquest, which “sees attackers and defenders fight over key areas, exclusively controlled by the defending team as the match starts.” For more about Turning Tides, have a look at the official Battlefield 1 page for it.