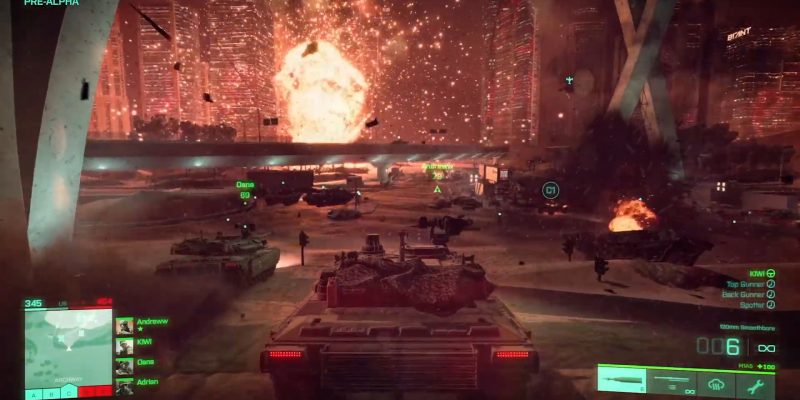 There’s no doubt that Battlefield 2042 will up the ante of large scale chaotic warfare again, as the latest gameplay trailer showed off some adrenaline-fueled action. We’re finally done with the trip through history as well, because the latest game features some slightly futuristic elements. As the name suggests, you’ll jump about 20 years into the future. There, soldiers swing through concrete jungles with grapple hooks, fight it out next to rocket site launches, and drive vehicles off of skyscrapers to crash into helicopters. The future.

Yet despite the over-the-top nature of the footage, the game looks like it will deliver exactly what fans want. Which is more of everything. The maps look huge and dynamic, movement looks like it will be easier this time around, weapons will be configurable on the spot, and more. It all paints a hellish picture of how warfare could be when soldiers have all the tools from the toybox out.

It’s hard to say where the city in the trailer is located (possibly Dubai?), but it appears ‘Merica is up against the Russians once again in the trailer. What’s interesting is that this location shares some similarities with the Shanghai map from Battlefield 4. That’s sure to get people hyped. Everything from helicopters to tanks are on the battlefield, and it even looks like vehicles can be called in by some means. That would explain how the four-wheeler got on top of the roof.

I hope you have good insurance

The raging twister seen in the Battlefield 2042 gameplay trailer takes the whole “dynamic maps” concept to a new level. It’s sure to cause immeasurable havoc on the already chaotic battlefield. We can see it hurling helicopters into the sides of buildings and sending players scrambling for cover. One squad retreats into an elevator, where they get a brief respite from the action. Seems like a missed opportunity for calming elevator music. They did, however, take time to reconfigure their weapons for firefight on the next floor of the building.

Battlefield 2042 launches on October 22, but we’re sure to see more gameplay and trailers before then. Don’t rule out the possibility of beta either. With the game being multiplayer only and having 128 players running around on massive maps, DICE will likely want to do some more testing to ensure a smooth launch.