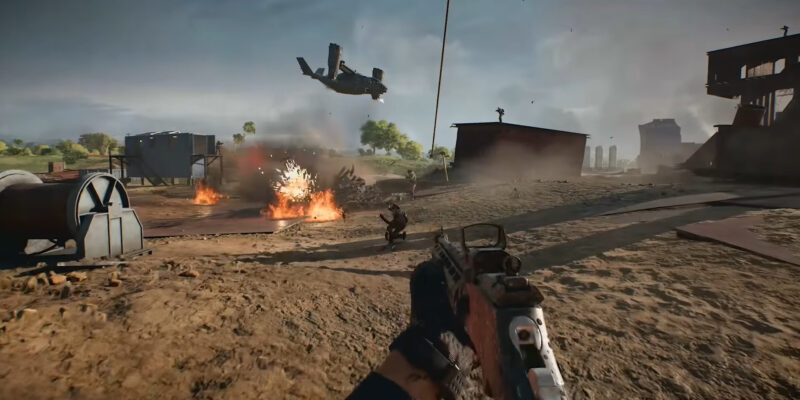 Although it was relatively well received, the beta for Battlefield 2042 was missing some expected features. Amongst these was a lack of support for any of Nvidia’s exclusive optimization settings like DLSS and Reflex. However, Nvidia has confirmed that these, along with ray tracing, will all be available –supposedly at launch — in Battlefield 2042, and there’s a new trailer showing it all off.

These settings help turn a good gameplay experience into a great one. Nvidia DLSS helps improve framerates, especially at higher resolutions. Meanwhile, Reflex greatly reduces system latency, making it fantastic for those who like to play competitively. But ray tracing is the real selling point for many, and this is supported in the form of Ray-Traced Ambient Occlusion.

The term ray tracing is frequently thrown around as a marketing tool, but many gamers don’t exactly know what it means. Ray tracing is a method of rendering light in a way that looks more authentic. For Battlefield 2042, this means applying ray tracing to its ambient occlusion.

Ambient occlusion in gaming refers to how physical environments interact with lighting. More specifically, it’s how they block lighting and therefore cause certain areas to appear darker. Ray-Traced Ambient Occlusion takes this to the next level by enabling higher quality lighting that reacts in real time. This is showcased in the ‘Official PC Trailer’ below.

For those of you who plan to play DICE’s upcoming FPS at either 4K or 1440p may also be interested in its DLSS support. Nvidia DLSS is a type of advanced supersampling that greatly improves frame rates. With this enabled, it’s possible to play at more demanding resolutions without taking a huge performance hit. It’s a must for a game as busy as Battlefield 2042.

Nvidia states that having access to all three of these features will help “deliver the definitive Battlefield 2042 PC experience.” That may be fancy PR talk, but the California-based tech company does have a point. If performance and visuals are the priority, there’s currently no better-known way to optimize them in Battlefield than backing Team Green.