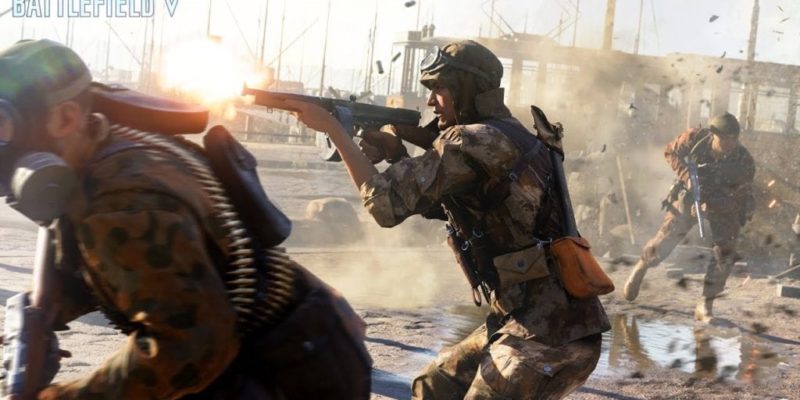 Battlefield games excel at throwing players into chaotic, brutal firefights. Battlefield 5 looks as though it will continue this tradition. The upcoming shooter’s latest trailer showcases in-game footage of a raging battle. Explosions ring out, tanks roll in, and soldiers do everything in their power to cut down enemy troops. It’s standard Battlefield affair, really. And that’s a good thing. But the real star of the new Battlefield 5 trailer comes at the very end. A ring of fire encloses the shell of a town. It creeps closer, trapping combatants to their fate. Only one person can survive. It seems as though we’re getting a good look at the teased Battlefield 5 battle royale mode.

There’s something powerful about the above trailer. It’s set to a somber cover of “House of the Rising Sun.” Released to coincide with an upcoming showing at Gamescom, Battlefield V‘s latest trailer seems almost cinematic. Though it uses in-game footage, there’s a pervading choreographed element to the action. Perhaps it’s the franchises’ emphasis on squad-based encounters; a distillation of carefully organized movements by a well-oiled unit.

It’s worth noting that the game also seems a bit faster than previous entries. Though the Battlefield games aren’t exactly plodding military sims, they’ve never been the fastest shooter in the world. Battlefield V‘s movement has a sense of speed to it, perhaps as a method of allowing players to outrun aerial assaults or vehicle-based offensives. Either way, the game looks great in the trailer.

But, the addition of a Battlefield V battle royale mode is the trailer’s standout moment. It seems all but confirmed that the upcoming shooter is following the wildfire-like success of Fortnite and PUBG. Interestingly, the battle royale tease comes just days after Call of Duty: Black Ops 4‘s announcement of a playable battle royale beta. More Battlefield V details will surely follow at Gamescom. Stay tuned for more updates.