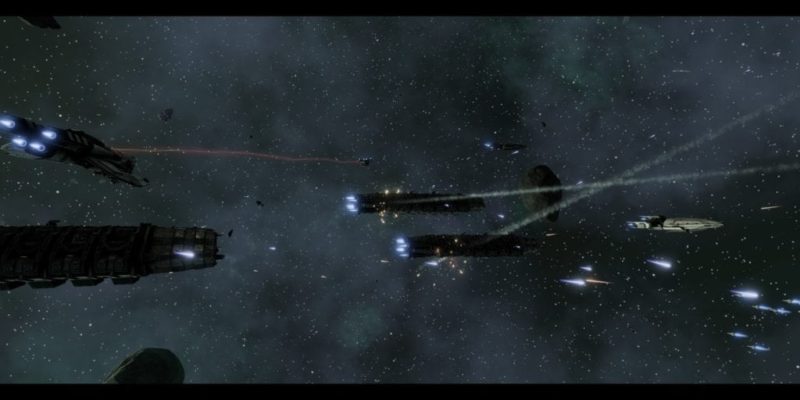 As part of Slitherine’s advertised ‘roadmap’ for the game, Battlestar Galactica: Deadlock has received patch 1.0.5 today. It does a little ship balancing (some better, some worse), and adds the very helpful option to “postpone” mission battles.

Players will probably not be surprised to hear that the indomitable Adamant has been nerfed. The ship itself just has a reduced maximum speed, but lighter Colonial turrets have had accuracy and damage reduced too. Depending on how much, the Adamant may not be the automatic mainstay of your Battlestar Galactica: Deadlock fleet after this patch.

No shock either to see Fighter damage get reduced across the board. Vipers were a bit too amazing, honestly. Battlestars themselves have received a bit of a boost. Jupiter and Artemis get increased hull points, and their artillery gets an increase in accuracy too. The only nerf to Cylon craft is a reduction in their light turret accuracy.

Here’s the list of changes, which include a slider for the UI size and the aforementioned option to postpone a main mission battle if it pops up when you’re not yet ready for it.

– Added an option to scale the size of the UI. There is now a slider in the main options panel.
– Player created Cylon fleets are now available to fight against in a offline Skirmish. These are marked with a green pentagon in the fleet list.
– Added a “Postpone” button to the battle queue for story and resource missions, which skip engaging in that battle for the current round. This means a mission can be held over to a subsequent round, or the ship(s) at the marker moved away during the next round.
– A number of balancing changes have been made:
> Decreased Adamant max speed
> Increased Jupiter and Artemis hull points
> Increased accuracy of Battlestar Artillery
> Colonial & Cylon Light Turret decreased accuracy
> Colonial Light Turret decreased damage
> Fighter damage decreased across the board
– Changed spawn points for resource missions to avoid creating “impossible” escort missions
– Autocam now captures missiles being stopped by Flak
– Heavy Turrets and Battlestar Artillery autofire rules now default to Capitals
– In Multiplayer Setup, the number of players in the main lobby is now displayed
– Displayed the casualty percentage for auto-resolvable battles in the battle queue
– Key remapping is available from the Options menu in the War Room and during a battle
– Randomised ship names in multiplayer and singleplayer skirmish (for fleet creation)
– Added an option to load a campaign manual save from the War Room or during a battle
– In Multiplayer, balanced co-op enemy fleets
– Made autocam recordings use the format “Skirmish: *Map Name*” and “Multiplayer: *Map Name*” for Singleplayer skirmish and multiplayer battles.

– Fixed Bug: UI stretching at 3840×1024 resolution
– Fixed issue where Esc to skip didn’t work if the intro wasn’t properly loaded. Fixed this by allowing the skip button even if the video wasn’t playing.
– Fixed an issue whereby the options panel could not be opened with an Xbox One controller