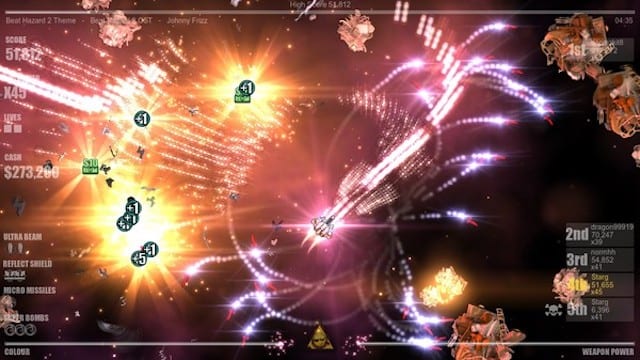 Fans seeking a fresh “shmup” (shooter) challenge on the PC gaming front may want to give Beat Hazard 2 a look. The developers at Cold Beam Games announced today that the long-awaited sequel has left Early Access, and is now a full release on Steam!

The game works with the player’s music collection, across a number of sources, to create experiences within it. This includes creating ships that are based upon your music, big and small alike. There are also enemy attacks that play along with each tune as well, based on what the trailer provides below.

Bring your own tunes

Cold Beam Games noted that Beat Hazard 2 works with a number of services, including Spotify, Apple Music, Amazon Music and even YouTube. This is through the game’s “Open Mic” system. For those that prefer in-game tracks, Beat Hazard 2 also comes with its own soundtrack conducted by Johnny Frizz. He worked on the original game, and has a few new tracks that fans are sure to love.

On top of that, it also features “procedurally generated boss ships” that pose a challenge after a few stages. You’ll need to create the right archenemy ship to bring them down, before they destroy you. And those that want to throw out something to other players, there are leaderboards for each in-game song. There’s also an “asynchronous challenge system” where you can try to be the last ship standing.

The game is currently priced at $18.99. However, for its launch, Cold Beam Games has a discount in place. Fans can snag it for a limited time over on Steam for just $15.19. That’s a steal, considering all the music fun that awaits you here. You can even blast enemies to Lou Bega’s “Mambo No. 5” if you’re feeling savvy enough.

Check out the trailer below, and prepare to blast off with Beat Hazard 2!

Monkey King: Hero is Back review – Not ready for a crown