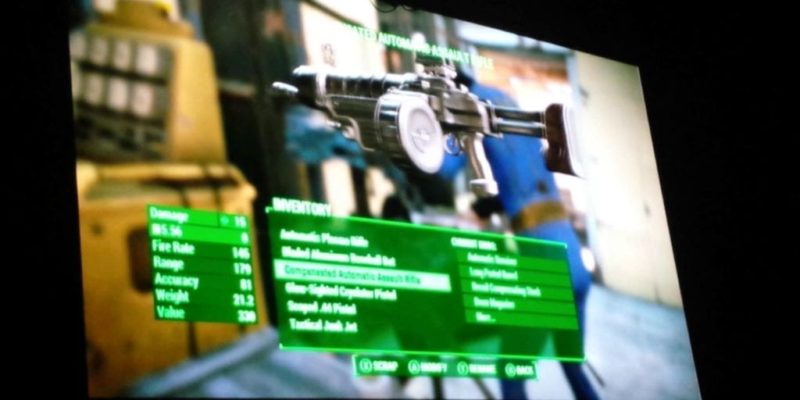 The internet was on fire over the reveal of Fallout 4. Dreams came true as years of anxious waiting were put at ease. However, more restlessness stirred with the incoming Bethesda press conference at the Dolby Theater in Hollywood, Calif. The hall is mostly known for holding the Oscars, but for the gaming community–this is much larger.

Instead of being an inclusion with Microsoft or Sony, the publisher marched down its own pathway to deliver the goods for games like DOOM and Fallout 4. But, much like any E3 presser, there was more in store for viewers all around.

Sitting around waiting for the news to start was a pretty magical feeling. There were fans littered throughout the theater and no visible open seats in sight. The Twitter feed rolled on a huge screen right above the stage and showcased tweets with the #BE3 tag. After walking in to see all DOOM weaponry, it was time to grab a Pepsi and get comfy.

The first-person shooter makes its return as the frontrunner of the genre. The game promises a mix of weaponry, including what we saw from the Super Shotgun, Heavy Assault Rifle, and of course—the chainsaw. These weapons cut enemies in half, but also showed some stylish moves, like the secondary scope of the assault rifle.

The weaponry was welcomed considering the juggernaut enemies plowing through destructive environments filled with flames and explosions. Health and armor pickups sort of fell apart as enemy limbs were deconstructed by gunfire. They were highlighted and littered about when enemies were defeated. Speaking of highlighting, when enemies had little health power they became highlighted in a white and gold outline. They could then be stomped, slammed, or even torn apart in a rain of blood.

Here are some of the known weapons seen in the DOOM demo:

The demo showcased more things than just guns. There was also the continuing support of Bethesda.net and introduction of the SnapMap feature for DOOM. There, players can create maps, piecing them together to add tons of variables for customization. Maps can be created across all platforms, allowing players snap-in objects and create maps despite their given platform. This was inspired by customizable game modes and maps previously created by the DOOM community. The multiplayer will focus on arena-style gameplay, which is something any DOOM player might be familiar with.

The game is also running on the id Tech 6 Engine, which to be honest, looked pretty damn smooth, especially with the fatality infused melees.

DOOM is slated to release Spring 2016 on the PC, PlayStation 4 and Xbox One.

Battlecry was shown again from Battlecry Studios. The game is an action group multiplayer, focusing on the third-person view. We had a chance to mildly play it at E3 2014, so we are hoping to give the game a strong comparison and analysis given its progress. There is also a BETA incoming for the title.

We were introduced to a new player in the game for the Dishonored franchise. You can now choose to play as a male or female protagonist. The new face to the series, Emily Kaldwin, showed off some supernatural powers having a dark smoke move her swiftly through corridors and tight entryways. It will be interesting how original character Corvo Attano ties into the current state of the storyline.

Here is the story behind Dishonored 2:

Dishonored 2 is set 15 years after the Lord Regent has been vanquished and the dreaded Rat Plague has passed into history. An otherworldly usurper has seized the throne from Empress Emily Kaldwin, leaving the fate of the Isles hanging in the balance. As either Emily Kaldwin or Corvo Attano, travel beyond the legendary streets of Dunwall to Karnaca – a once-dazzling coastal city that holds the key to restoring Emily to power. Armed with the mark of the Outsider and powerful new supernatural abilities, hunt down your enemies and forever alter the fate of the Empire.

The Dishonored: Definitive Edition brings out a more polished version of the game for the Xbox One and PlayStation 4. It will release for August 25, 2015 for $39.99.

Here are the DLC packs that are included along with it:

There was a few tidbits of news for The Elder Scrolls. A new strategy game will releasing as a free-to-play title on PC and iOS.

Of course, the best was saved for last. Fallout 4 seemed like a never-ending fountain of chocolatey good news. It turns out that the game itself has been in development since 2009, something to which the audience was a little surprised to hear. However, knowing the customization that lines the streets of Fallout 4, there is no doubt the six-year development cycle has led to an abundance of content.

There was a lot of information loaded into a small amount of time. Character customizations were shown off in the demo. You can choose either a male or female main character. Instead of slide-bars and calculated imperfections, you can simply touch portions of the facial design, then click and pull to manipulate their characteristics. This is something to marvel back at as you can play the game in third-person view.

The experience is the important thing, right? While the game has been in development for some time, you can’t help but notice that in some areas it was looking graphically dated. This was surprising as the game was noted as running on the next-gen Creation Engine. The game further provides a real-world experience as it includes a volumetric lighting system. This will no doubt deliver eerie light in the 200 years after nuclear fallout. That is also when the story opens after Vault 111 releases you into the world.

Eerie mist one the planes. What treasures do you think are out there?

Of course, many are prepped to peel open their wallets and throw money at Bethesda. If it wasn’t an already promising experience, a limited edition of the game is prepped and ready for launch. The Fallout 4: Pip-Boy Edition will come with a Pip-Boy that is fully functional with your phone. You can play games, listen to the radio on it, as well as do everything you can in-game as it uses the same coding.

The Pip-Boy gives access to player customization, including layered armor. There are also structural and weapon crafting to be done. You can tear down items or build up your own establishments. You can even go so far as to string generators and terminal structures together, providing future power plans for turrets and barriers. These will accompany the more than 50 base weapons and over 700 variables you can modify them with.

The crafting doesn’t stop with structures. There are real-world items that can be found and torn apart. So, if you are looking to build a gun scope, you can break down various items to find all of the components to build that given scope. This delivers a higher sense of depth as more items in-game become important.

Lastly, the date for Fallout 4 was released. The game will release on November 10, 2015 on PC, Xbox One and PlayStation 4. Fallout Shelter, an iOS mobile title became available for release today on the iTunes Store.

What are your thoughts on the games shown? What do you anticipate most?

Doom E3 2015 trailers are hellish – Watch them all